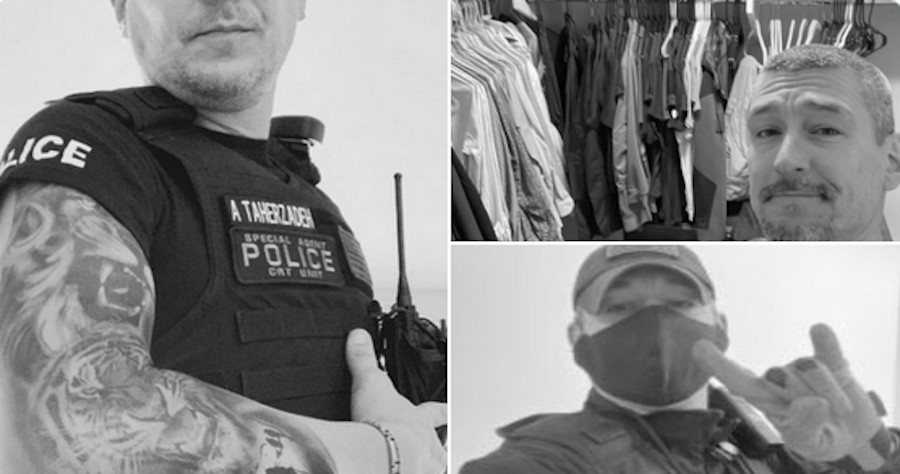 The two fraudulent workers named as Arian Taherzadeh, 40, and Haider Ali, 36, were arrested on Wednesday evening as the FBI stormed their luxury apartment building in Southeast Washington.

The FBI were photographed by social media users taking numerous boxes out of the apartments.

While posing as members of the team, Taherzadeh and Ali, whose nationalities have not yet been revealed, wooed Secret Service agents by buying them expensive gifts including high end electronics and policing equipment and providing them with rent-free luxury apartments.

The pair drove around in an SUV which Taherzadeh said to a security agent’s wife was his “government vehicle,” which was complete with rooftop flashing lights.

According to reports by the Daily Mail, Taherzadeh and Ali even offered a member of Jill Biden’s security team a $2000 assault rifle and supplied another member with a $40,000 a year penthouse apartment.

It is not yet known why the two men infiltrated the secret service or how they managed to manoeuvre their way into such a delicate position of power amongst those in charge of protecting the First Lady, nor has it been revealed how the men were able to fund their lifestyle or the gifts.

While investigations are on-going, four members of the Secret Service have been suspended, including a member of Jill Biden’s security detail.
Information regarding the con artist’s personal dealings or contact with the President or the First Lady is yet to be released by authorities.

The pair are being charged with impersonating federal law enforcement and obtaining weapons and materials to pose as Department of Homeland Security officers.
According to reports by Daily Beast, Ali and Taherzadeh began the elaborate con as far back as February 2020 and fooled members of the public and government officials alike all that time.

They flashed official-looking ID cards, carried glocks and according to the FBI, stashed a horde of special policing equipment including bullet proof vests, surveillance systems, a drone, a generator and a gun case.

Astoundingly, the two men even set up a website on which they claimed to be official government agents and used it to attempt to recruit a new employee to help their ‘unit’.

The Daily Beast reports that the unfortunate applicant underwent a series of recruitment tests including being shot by the fraudsters with an air-rifle to measure the recruit’s tolerance to pain.

For reasons yet unknown, the unnamed applicant was also told to research an individual who worked as a contractor for the Department of Defense.

The elaborate and mysterious con began to fall apart on March 14, as the US Postal Inspection Service began an investigation into an assault on a mail carrier in the area of Taherzadeh and Ali’s apartment building.

Residents of the block, in which the pair rented several apartments, told investigators that Ali and Taherzadeh had previously identified themselves as government agents, and had said that the DHS paid their rent.

Upon speaking to the men in relation to the assault, the both confirmed again to investigators they were members of the special police and said they were involved in undercover gang-related investigations and work relating to the Capitol building riots.

Residents said men claimed they could hack their cell phones and that they saw “a significant amount of law enforcement paraphernalia, including SWAT vests, a large safe, computers, a high-powered telescope and internal surveillance cameras” in the fake fed’s apartments, reported the Washington Post.