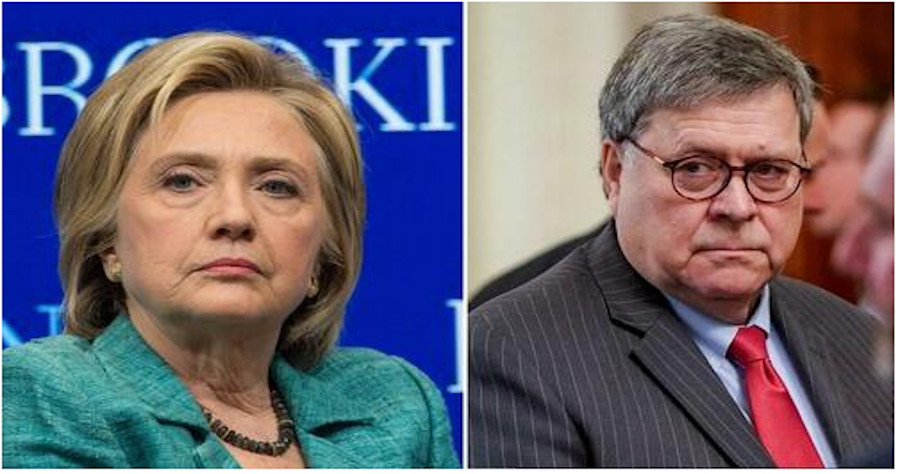 Former US Attorney General Bill Barr says Hillary Clinton engaged in a “seditious” conspiracy against Donald Trump, and that he named Special Counsel John Durham to investigate what appears to have been a “dirty political trick” to paint the former president as a Russian stooge.

“I thought we were heading into a constitutional crisis. I think whatever you think of Trump, the fact is that the whole Russiagate thing was a grave injustice. It appears to be a dirty political trick that was used first to hobble him and then potentially to drive him from office,” Barr said on an upcoming episode of Glenn Beck’s Blaze TV podcast, adding “I believe it is seditious.”

“It was a gross injustice, and it hurt the United States in many ways, including what we’re seeing in Ukraine these days. It distorted our foreign policy, and so forth,” he continued – while warning that those charges would be difficult to prove in court.

An FBI investigation into Trump’s campaign over alleged ties to the Russian government during the 2016 election, known as Crossfire Hurricane, was the source of unceasing controversy for Trump throughout his presidency. Leaks from the investigation were used by the 2016 Hillary Clinton campaign to accuse Trump of colluding with the Russians to interfere in the election, spawning conspiracy theories that his victory was illegitimate. After Trump fired FBI Director James Comey in May 2017, congressional Democrats accused him of attempting to obstruct the Russia probe, demanding the appointment of a special prosecutor to investigate Trump’s actions. -The Blaze

Barr says that when he appointed Durham to investigate the case, he was “highly confident” that the Biden administration, including Attorney General Merrick Garland, wouldn’t interfere.

“I was highly confident he would remain in office and they wouldn’t touch him,” he said, adding “The Biden administration had no real interest in protecting either Hillary Clinton or Comey.”

“And at the end of the day, for them to lose the capital and appear to be covering something up that would then never get resolved, I didn’t think was in their interest.”

Barr also said that a grand jury was required in order to get people to talk.

“If you don’t have the threat of a grand jury, no one will come in and talk to you. You’ll say, the usual thing is, ‘Please come in for a voluntary interview,’ he said. “And people come in because they know if they don’t, they’re subpoenaed.”

Durham’s investigation follows a two-year, $32 million investigation by Special Counsel Robert Mueller, who concluded in a March 2019 report that Russia did interfere with the 2016 US election, however the “investigation did not establish that members of the Trump Campaign conspired or coordinated with the Russian government in its election interference activities.”

Mueller’s investigation would ultimately serve as a cover-up for Clinton’s alleged sedition – failing to produce indictments for people like Michael Sussmann, a former Clinton Campaign lawyer who’s now on trial for pushing the Hillary-approved hoax that the Trump organization was covertly communicating with a Kremlin-affiliated bank. Durham has accused Sussman of lying to the FBI about his reason for meeting with top bureau official James Baker, when he said he wasn’t providing the information on behalf of any client.

Barr told The Blaze that when he brought Durham on board, DOJ inspector general Michael Horowitz (D) had yet to finish his investigation of the FBI’s use of FISA court warrants against Carter Page, an adviser to the Trump campaign. Durham wanted to see Horowitz’s report before starting his work, which was finally released in December 2019. Durham was able to access the report for just three months before the Covid-19 pandemic shut down grand juries and delayed his investigation throughout most of 2020.

“His hands were very much tied as to how far he could push things and how much pressure he could bring on people through most of 2020,” said Barr.

Last week Robby Mook, Clinton’s 2016 campaign manager, testified that Clinton had personally authorized her campaign to share the bank hoax with a reporter, which was later found to be disinformation. Mook noted that the campaign had not verified the accuracy of the claim.

Barr’s full interview will be released on Saturday, May 28.