Stocks tumbled Monday, pushing the S&P 500 back into bear market territory, as the major averages came off their worst week since January.

There’s broad selling “and a little bit of fear as to whether the Fed is going to make a misstep and normalize rates too quickly and create a recession,” said Jeff Kilburg, chief investment officer of Sanctuary Wealth.

The S&P 500 hit a new intraday low for the year and its lowest level since March 2021. The benchmark is more than 20% from its record, back in bear market territory after trading there briefly on an intraday basis about three weeks ago.

The benchmark now sits more than 20% from its January record close with just 15 stocks trading in the green. If it finishes there on Monday, it will confirm a bear market to many on Wall Street.

Data from Bespoke Investment Group shows that since World War II there have been 14 bear markets on a closing basis and on average, the S&P 500 has pulled back a median of 30%, with the downturn lasting a median of 359 days.

“The odds of a ‘June Swoon’ straight to 3,400 have gone up significantly, in our view,” wrote Jonathan Krinsky, technical analyst for BTIG.

“We thought a momentum reversion where winners got bought and losers sold would create chop at the index level, but last week is a reminder that the risk continues to be to the downside,” Krinsky added.

Monday’s sell-off was broad-based, with roughly 26 New York Stock Exchange-listed stocks trading lower for every advancer. The moves could indicate that many investors are profit-taking or repositioning their portfolios, and may signal that markets are in “a capitulation stage,” said Kilburg.

Shares of Boeing, Salesforce and Dow fell more than 8%, 5% and 3%, respectively, dragging down the Dow. Beaten-up tech shares also took a hit with Netflix, Amazon and Nvidia down more than 5% as the Nasdaq touched a fresh 52-week low and its lowest level since November 2020.

Travel stocks also slipped on Monday, with Carnival Corporation and Norwegian Cruise Line down about 9% and 11%, respectively. Delta Air Lines fell about 7% and United tumbled 8%.

All major S&P 500 sectors dipped into the red, with energy and consumer discretionary down more than 4%. Real estate and materials also slipped about 3%. 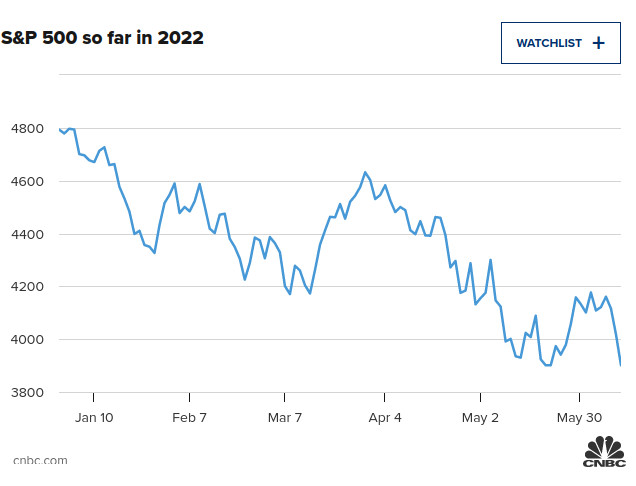 Meanwhile, short-term rates jumped as investors still reeling from a hotter-than-expected inflation report on Friday braced for the Federal Reserve to raise rates later in the week.

The 2-year Treasury yield rose by 17 basis points to more than 3.22% Monday, reaching its highest level since 2007 as investors bet the Fed may have to get even more aggressive to squash inflation. At one point in the session, the 2-year rate traded above its 10-year counterpart for the first time since April, a so-called yield curve inversion seen as an indicator of a recession.

The moves came after the major averages last week posted their biggest weekly declines since late January as investors grew increasingly concerned rising inflation will tip the economy into a recession.

The Bureau of Labor Statistics reported Friday that the U.S. consumer price index rose last month by 8.6% from a year ago, its fastest increase since December 1981. That gain topped economists’ expectations. The so-called core CPI, which strips out food and energy prices, also came in above estimates at 6%.

Bitcoin tumbled below $24,000 on Monday and hit its lowest level since 2020 as risk-averse investors continued to dump crypto as rates rise. Crypto-related companies including Coinbase and Microstrategy slipped about 8% and 18%, respectively, amid the news.

“The cryptocurrency bitcoin has been a great gauge of investors’ risk threshold for equities,” wrote JC O’Hara, chief market technician at MKM Partners. “Plenty of longs who bought in last year are still trapped, and thus we could easily see a pullback to 19,500. That would be a bearish read through for stocks.”

The Fed is expected to announce at least a half-point rate hike on Wednesday. The central bank has already raised rates twice this year, including a 50-basis-point increase in May in an effort to stave off the recent inflation surge.

Following Friday’s CPI report, some economists believe the Fed could even raise rates by 0.75% this week.

“Investor and consumer sentiment both have soured. But this time, pervasive bearishness may not be as useful a contrarian bullish signal as in the past,” he said, adding that the firm now sees a 45% chance of a “mild recession.” That’s up from the previous forecast of 40%.