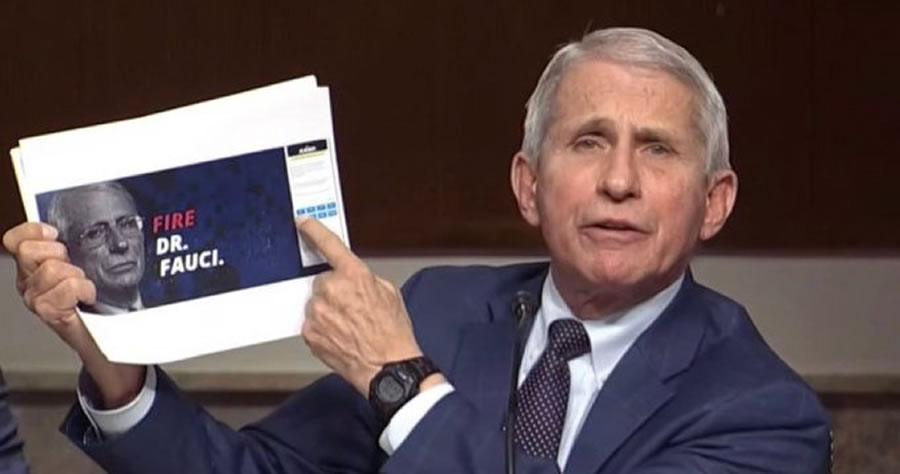 Dr. Anthony Fauci accused Republican Senator Rand Paul of personally attacking him for ‘political gain, distorting ‘everything’ he says’ and inspiring ‘crazies’ to want to kill him during another tense battle in a hearing on Tuesday.

The National Institutes of Health director erupted at his nemesis for suggesting he was using his $420,000 salary, the highest in the federal government, to ‘take down’ scientist he disagrees with and for calling him ‘lead architect’ in the pandemic response that’s led to 800,000 Americans dying under President Biden.

Paul, who has called for Fauci to be fired and prosecuted, referenced emails published by Republican lawmakers on Tuesday containing an exchange between Fauci and his boss, Dr. Francis Collins, in which they dismiss a report that the pandemic originated in the Wuhan lab.

why is a bureaucrat walking into a congressional hearing prepared with oppo research instead of answering to reasonable criticism https://t.co/t5Q2r9uEwp

.@RandPaul to Fauci: “[T]he idea that a government official like yourself would claim unilaterally to represent science and that any criticism of you would be considered a criticism of science itself is quite dangerous…It is cheap politics & it is reprehensible.” pic.twitter.com/b6JCaaHQTR

Asked by @RandPaul if “it’s appropriate to use your $420,000 salary to attack scientists that disagree with you,” Dr. Fauci FREAKS OUT: “[I]n usual fashion, senator, you are distorting everything about me….There you go again. You do the same thing every hearing.” pic.twitter.com/nBaFkfDcMq

FIREWORKS: @RandPaul asks Dr. Fauci if he thinks it’s a “conspiracy theory” to wonder if COVID-19 came from a lab, but Fauci says Paul’s “distorting the truth” & “virtually everything” about him. pic.twitter.com/DD6pIkf0I4

Dr. Fauci then accuses @RandPaul of showing little concern for the 900,000 Americans who’ve died from COVID and instead leveling “personal attacks on me that have absolutely no relevance to reality.”

Paul counters w/mental health + how more have died under Biden than Trump. pic.twitter.com/XSunPAs6yM

WATCH: Dr. Fauci talks about how a man was arrested for treating to kill him.

He blames it on Rand Paul having a “Fire Fauci” banner on his website, which he pulls out a printed copy of. pic.twitter.com/QbS0ov23eB

This photo will go down in time as one of the worst optics blunders in history pic.twitter.com/wcqX1OVY0u

His entire argument is that trying to hold him accountable is bad because it makes him look bad in public.

This is a trick by the left being used time and again. Get cornered about something then distract from it by proclaiming victimhood status through claims of endangerment. It’s a weasel’s tactic. https://t.co/pLikGulsPg