Elitist Mayor Pete Called Out For Bailing On Black Americans, And His Response Couldn’t Be More Tone Deaf [VIDEO] 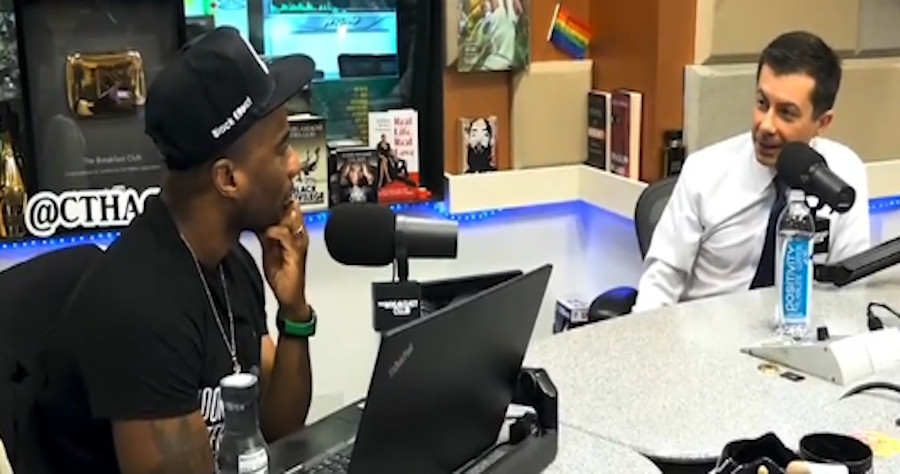 Mayor Pete is a walking meme at this point. He was not only in over his head as a small-town mayor, where critics like to point out he couldn’t manage basic issues like potholes, but he was also sorely indifferent to the plight of black residents. Under his watch, violent crime spiked to record highs, and his response was to fire a black police chief, a move not unnoticed by the woke, identity politicking left.

As a failed presidential candidate who only got to the national stage because of his publicized – and wholly unimportant – sexual attraction to men, he nevertheless gained enough team to parlay his empty resume into a sweet cabinet position. He proceeded to disappear for the next year while Democrat-created supply chain issues rocked his supposed kingdom. He also called inanimate roads and bridges racist.

Needless to say, Mayor Pete doesn’t have a clue. He enjoys the elitist high life and the lifestyle pleasures that come with it. He neither knows nor cares about the concerns of most Americans.

So it isn’t really a surprise that he would respond to a basic statement with complete shock and horror that his out-of-touch worldviews weren’t being well received by the plebes, particularly the plebes to whom Democrats have pandered for over a half-century and yet somehow keep getting 95% of their vote in lockstep.

Charlamagne The God: “You do realize – a lot of black people feel like Democrats have kept no promises since they’ve been in office

Man, this guy is the worst. The team over at Wayne Dupree summed it up pretty well:
“We all know the Dem Party consists of a bunch of snooty out-of-touch elitists.

This is the political party that thinks working-class Americans who can’t afford $5 bucks a gallon for gas, can just run out and buy a 55K electric car.
They don’t care about the middle-class, because they don’t understand the middle class.

And nowhere was that more clear than when snooty Mayor Pete appeared on Charlamagne tha God’s very popular radio show.

It only took 9-seconds for Charlamagne tha God to prove that Mayor Pete is a total out-of-touch liberal elitist.”

The Atlantic, no friend of conservatives and whose editorial team consists of one Anne Applebaum, who unironically admitted at a conference ostensibly held to clear up the role of honest reporting in media that she was not interested in the corrupt dealings of a son of the president was doing, also said Mayor Pete rubs their own team the wrong way!

“Young progressives on the internet don’t seem to like Pete Buttigieg very much. They’ve called him “the most obnoxious type of Millennial” and “a Boomer wrapped up in a Millennial’s clothing”; a “Build-a-Bear for middling Democrats” and “a candidate seemingly dreamed up by some Democratic National Committee algorithm”; a “baggie full of uncut special interest talking points” and a “grab bag of gifted-and-talented party tricks.” Buttigieg is a young person’s idea of an old person—and, evidently, some sort of bag.

They also hate him because they think he’s a liar.”

What else can we say except that Mayor Pete is the ultimate clown in a city full of them.