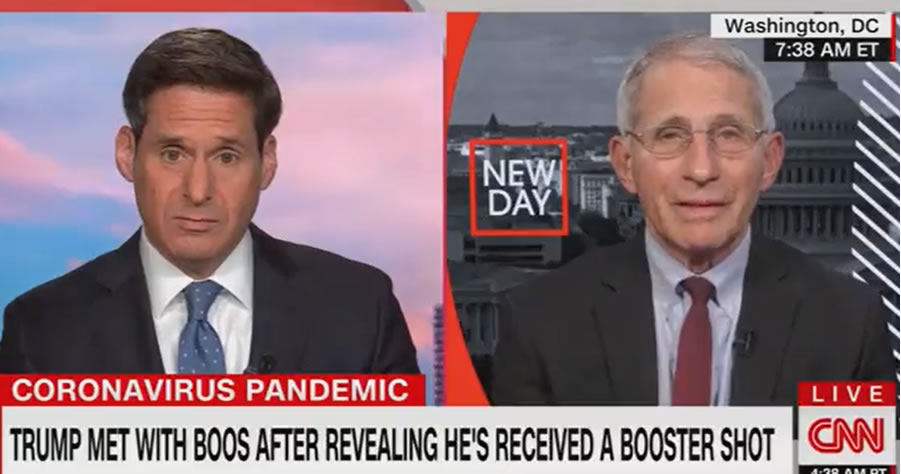 CNN’s “New Day” co-anchor John Berman interviewed Dr. Fauci on Tuesday, quizzing him on his reaction to Fox News host Jesse Watters’ use of the “kill shot” metaphor during a speech at a Turning Point USA event that called him out over “risky research.”

Berman giddily relayed the story to Fauci as if it was the first time he had heard about it, referring to the Fox News host as an “entertainer.”

“Jesse Watters, who is a Fox News entertainer, was giving a speech to a conservative group where he talked about you and suggested to the crowd that they ambush you with what he said was some kind of rhetorical kill shot. That was his exact word.”

“I’m wondering, you know, how much that concerns you when you hear language like that about you and your well-being?” he asked Fauci, goading his outrage.

Fauci called Watters’ words “horrible,” and hypocritically lamented “that just is such a reflection of the craziness that goes on in society.”

Then Fauci, without naming Fox News directly, demanded that Watters be fired “on the spot.”

“The only thing that I had ever done throughout these two years is to encourage people to practice good public health practices, to get vaccinated, to be careful in public settings, to wear a mask. And for that, you have some guy out there saying that people should be giving me a kill shot, to ambush me? I mean, what kind of craziness is there in society these days?” he asked.

“That’s awful that he said that. And he’s going to go very likely unaccountable. I mean, whatever network he’s on is not going to do anything for him. I mean, that’s crazy. The guy should be fired on the spot!” Fauci proclaimed.

Here’s the clip now going viral on lib Twitter where Watters said about Fauci, “Now you go in with the kill shot – deadly. Because, with an ambush, he doesn’t see it coming”:

The incendiary, dangerous, violent rhetoric against Dr. Fauci continues at AmericaFest. Fox News host Jesse Watters tells them how to go after him to harass him in public: “Now you go in with the kill shot – deadly. Because, with an ambush, he doesn’t see it coming.” pic.twitter.com/V34YZwDdPD

CNN is just going to gloss over the “rhetorical” aspect of it?

CNN is turning it into a terror plot.

Idiots leave out the “rhetorical” part to Rupar it. https://t.co/oHsuy0DKPi

Dr. Anthony Fauci says Fox News’ Jesse Watters should “be fired on the spot” for telling a crowd to “ambush” Fauci with “the kill shot.”

But, he adds: “He’s gonna go, very likely, unaccountable. I mean, whatever network he’s on is not going to do anything for him.” pic.twitter.com/K3X0V3jZdM