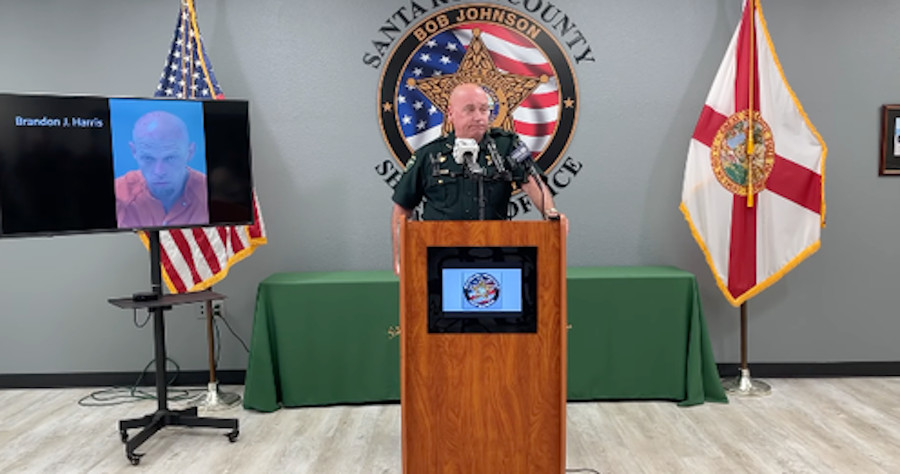 Homeowners under attack by a burglar don’t need to retreat or try to escape but rather stand their ground, and, if necessary, use deadly force. This is what a Florida sheriff told residents.

Santa Rosa County Sheriff Bob Johnson told residents they’re “more than welcome” to shoot burglars at a Thursday press conference after a crazed man went on a home invasion spree in the northwestern portion of the Sunshine State.

“If somebody’s breaking into your house, you’re more than welcome to shoot them in Santa Rosa County, and we prefer that you do actually,” Johnson said.

According to the Pensacola News Journal, the sheriff wasn’t sure which homeowner shot at 32-year-old Brandon Joseph Harris, who has since been arrested and accused of committing a series of break-ins on Wednesday evening.

“We don’t know what homeowner shot at him.

“I guess they think they did something wrong, which they did not.

“Whoever that was, you’re not in trouble. Come see us. We have a gun safety class we put on every other Saturday, and if you take that, you’ll shoot a lot better, and hopefully, you’ll save the taxpayers money,” Johnson said.

The suspect has been arrested 17 times since the age of 13 and has been sent to prison for six-and-a-half years for a home invasion.

Johnson said: “Some people just don’t learn. For us, he is job security. We deal with him all the time. Hopefully, this time he will go, and he won’t get out.”

Gun advocacy group Concealed Nation said, “using your firearm to defend property is a gray area, but if an intruder is inside your home, all bets are off, and you must do what you can to defend yourself and your home.