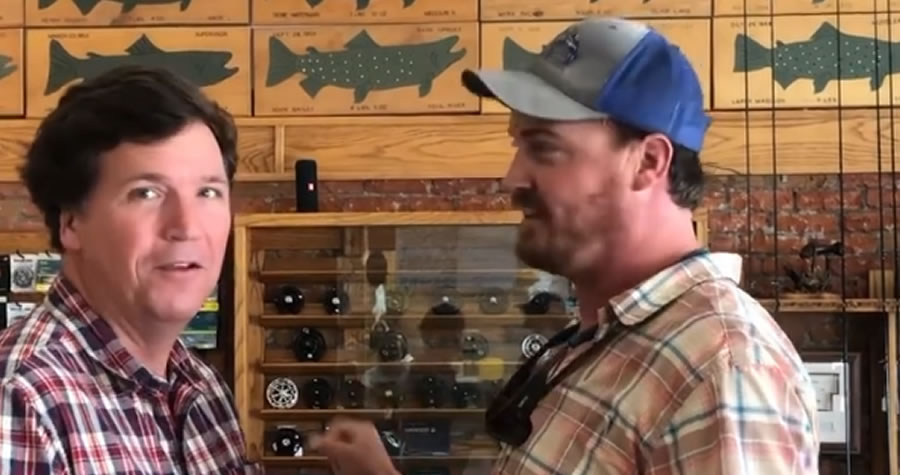 A man identified as Dan Bailey posted a video of the ugly incident on his social mediage pages.

Carlson was in the fly fishing store with is daughter and he tried to explain that the raging nut job.

Bailey can be heard saying, “I don’t care, man. Dude, you are the worst human being known to mankind.”

“I appreciate that,” Carlson replied. “I’m not gonna debate.”

As Bailey became more and more unhinged, Carlson whispers, “Settle down, son.” Bailey tells Carlson not to call him son before the video ends.

“It’s not everyday you get to tell someone they are the worst person in the world and really mean it! What an asshole! This man has killed more people with vaccine misinformation, he has supported extreme racism, he is a fascist and does more to rip this country apart than anyone that calls themselves an American,” Bailey wrote on Instagram with the hashtag “f-Tucker Carlson.”

Coincidentally, the incident happened at Dan Bailey’s Outdoor Company, and the owners were kick to make sure Carlson’s attacker had no connection to the store.

“On July 23, a well-known television personality, Tucker Carlson, was affronted while shopping at Dan Bailey’s Outdoor Company. Coincidentally, the person engaging Mr. Carlson was a local resident named Dan Bailey. This person has no affiliation with our business, other than he shares the same name as our founder, who passed away in 1892. To be clear, we treat every customer equally and respectfully. Our staff was professional and cordial to Mr. Carlson, as we are with all of our customers.”

This is why every conservative personality needs to be armed at all times. You never know when some sort of foul-mouthed lunatic is going to attack you in a public place.

Fortunately, Mr. Carlson’s attacker was not armed. But it’s always better to be safe than sorry.