Matt Gaetz on NY Times ‘Underage Girl’ Story: ‘It Is a Horrible Allegation and It Is a Lie’ [VIDEO] 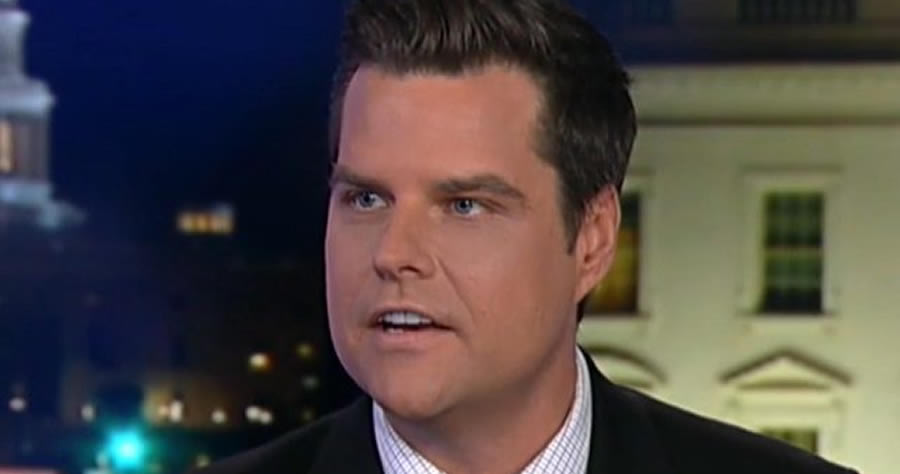 Tuesday on FNC’s “Tucker Carlson Tonight,” Rep. Matt Gaetz (R-FL) responded to allegations in a New York Times story that the Justice Department investigated him over whether he had a sexual relationship with a 17-year-old girl.

Gaetz denied the claims, calling them “a lie,” and claimed it was part of an extortion scheme, naming Pensacola, FL lawyer David McGee, a former U.S. Attorney, as

“It is a horrible allegation, and it is a lie,” he said. “The New York Times is running a story that I have traveled with a 17-year-old woman, and that is verifiably false. People can look at my travel records and see that that is not the case. What is happening is an extortion of me and my family involving a former Department of Justice official. On March 16, my father got a text message demanding a meeting wherein a person demanded $25 million in exchange for making horrible sex trafficking allegations against me go away.”

“Our family was so troubled by that, we went to the local FBI,” Gaetz continued. “And the FBI and the Department of Justice were so concerned about this attempted extortion of a member of Congress that they asked my dad to wear a wire, which he did with the former Department of Justice official. Tonight, I am demanding that the Department of Justice and the FBI release the audio recordings that were made under their supervision and at their direction, which will prove my innocence and that will show that these allegations aren’t true. They are merely intended to try to bleed my family out of money.”