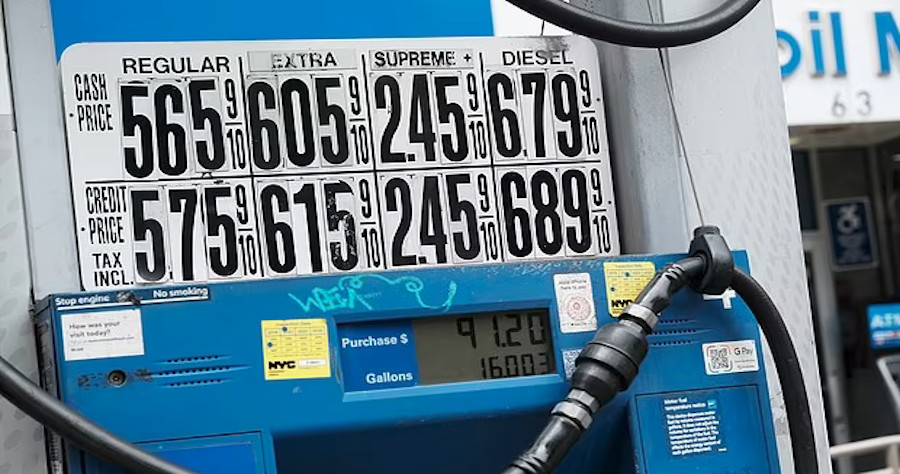 Gas prices hit new RECORD high of $4.71 nationally and seven states top $5 a gallon as Bidenflation rocks the US and the president throws up his hands and admits he’s powerless to help

The national average went up four cents overnight, averaging $4.71/gallon
Seven states are now above $5/gallon, as California and Nevada lead the nation
Inflation continues to impact multiple industries throughout the US, including gas, food, and electricity
President Joe Biden, 79, said on Wednesday that gas and food prices are ‘not likely’ to come down anytime soon because there’s a lot ‘going on right now’
An expert on Monday echoed this, saying there was ‘very little’ the president could do to lower the astronomical prices
The west and east coasts are being hit the hardest with California taking the brunt end of it
California leads the nation as the only state with an average above $6, with Nevada behind it at $5.30
The south is experiencing the cheapest prices nationally, with an average of around $4.19 to $4.36

US gas prices have hit a new high of $4.71, just a day after hitting the record as seven states top off at $5 a gallon as inflation soars.

For the first time in history, the average price has exceeded $4.00 in all 50 states – by a longshot.

At the White House on Wednesday, President Joe Biden said, ‘There’s a lot going on right now but the idea we’re going to be able to click a switch, bring down the cost of gasoline, is not likely in the near term. Nor is it with regard to food.’

The west coast has been hit the hardest with the biggest sticker shocks in California and Nevada, which continue to lead the nation with the highest gas costs.

California is the only state with an average over $6, with some heavily populated areas, like Los Angeles, seeing up to $8 at the pump. Nevada averages $5.36, while Hawaii, Washington, and Oregon average in the $5.20s.

Georgia and Arkansas lead for the cheapest average of $4.19 and $4.23 a gallon, respectively.

The northeastern part of the US can expect to be just under $5, with many only pennies away from hitting the mark.

The Midwest has a wide variety of ranges, with many falling into the upper categories, ranging between $4.50 to $5.26. The Great Plains is mainly experiencing middle ground price, ranging from $.4.36 to $4.77. The South has the cheapest gas, with the majority of the states falling into the lowest average of $4.19 to $4.33.

The national average has risen over a dollar compared to one year ago, which was at $3.04. 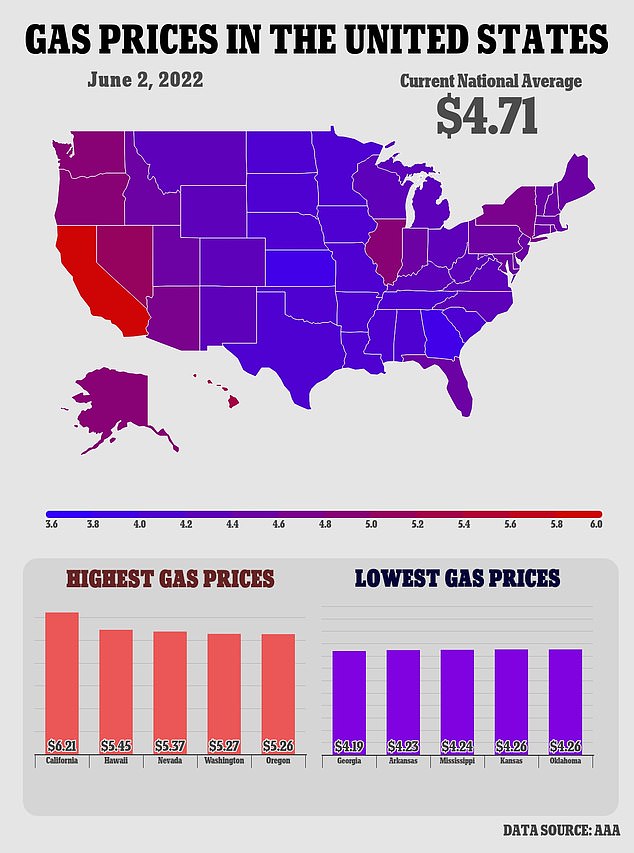 US gas prices have hit a new high of $4.71, just a day after hitting the record as seven states top off at $5 a gallon

On average, consumers can expect to pay more than 30 percent than the day before Russia invaded Ukraine. It is also up more than 45 cents than the day President Joe Biden, 79, announced the largest oil release in late March.

As the US pulls itself from the throngs of the pandemic and the summer travel season begins, costs of almost everything continue to inflate.

Food, gas, and electricity are all up, causing the nation’s bills to increase and summer vacation money to dwindle as families try to keep up with the ever rising cost of inflation, which has only gone up since Biden took office.

Prices were recovering from the pandemic when stay-at-home orders and business shutdowns slashed demand for gasoline. A lack of supply resulted in a gas shortage last summer, sending US gas prices to a seven-year high.

Gas prices continue to rise as oil prices do. Brent crude oil gained one percent on Tuesday and up another 0.02 percent on Wednesday. It is creeping back up to the highest prices in the last three month.

The percentage rose after Europe said it would phase out 90 percent of Russian oil by the end of the year as the Ukrainian war continues to rage on.

Crude oil is now more than $115 a barrel due to ‘fears of further global supply constraints’ since the European deal, AAA reported.

Another reason gas prices are continued to soar is the upcoming summer travel season and the ‘pent-up urge to travel’ since the pandemic shut down many vacationers’ plans over the last two years.

However, a recent AAA survey suggested 67 percent of drivers would consider staying closer to home if gas prices hit $4.50, which the majority of travelers are experiencing right now.

Dampened travel plans have yet to ‘be seen,’ according to an AAA spokesperson.

On Monday, a CNN Business expert admitted there was ‘very little’ Biden can do amid soaring gas prices despite the network insisting that it is a ‘global problem’ that needs ‘global solutions.’ 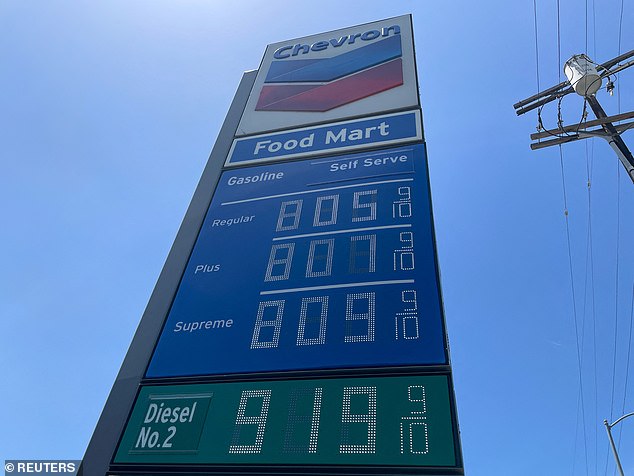 California continues to lead the nation with an average of $6.23, with some pumps hitting $8 in Los Angeles (pictured)

‘The unfortunate reality for President Biden is there isn’t much he can do in the short term,’ CNN business correspondent Rachel Solomon said.

She also said that President Biden had exhausted his short-term solutions for high gas prices, including tapping into the petroleum reserve.

She mentioned the onset of hurricane season and the millions in Shanghai, that are no longer in COVID lockdown may tap into the demand and would not help an already troubling situation.

During Monday’s CNN show, Solomon said she recognizes the ‘pain is widespread,’ and appeared sympathetic yet realistic: ‘The options are looking pretty bleak at this point,’ she said.

‘There is very little any sitting US president can do in the short term to try to lower prices.’

She continued: ‘We know the energy secretary told our colleague Matt Egan last week that all options are on the table and so it remains to be seen what creative solutions they will find.’