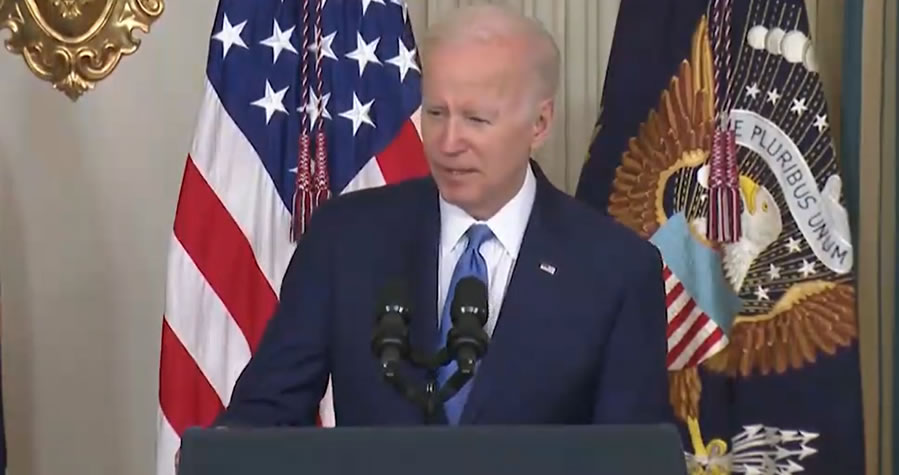 Having lost his first wife and daughter in a 1972 car accident, then his son, Beau, to brain cancer in 2015, President Joe Biden knows a lot about grief, which has allowed him to empathize with people from all walks of life who have lost loved ones. Media outlets have praised him for this quality, with TIME magazine saying he’s “unmatched as America’s grief counselor” while NBC News has referred to him as the “consoler-in-chief.”

But on Thursday, the president didn’t quite muster the compassion he’s so known for when expressing his condolences.

During a Thursday ceremony to sign the Ocean Shipping Reform Act into law at the White House, Biden began by addressing the head of retailer Jo-Ann Stores, who was in attendance, over news Wednesday that the company’s chief financial officer, Matt Susz, passed away unexpectedly.

“And by the way, my sympathies to your family of your CFO, who dropped dead very unexpectedly,” Biden said.

“My best to their family. It’s tough stuff,” the family added.

This man that “dropped dead” was Matt Susz, one of my good friend’s father. My friend is in a lot of pain right now, and to hear and see this statement right after losing your father is devastating.

I can’t believe that this man is our president. Do better. https://t.co/vh78qZdm0H

Not knowing who you’re talking about, then saying the deceased “dropped dead” is certainly an interesting way to offer condolences https://t.co/NKnGNdMnKD