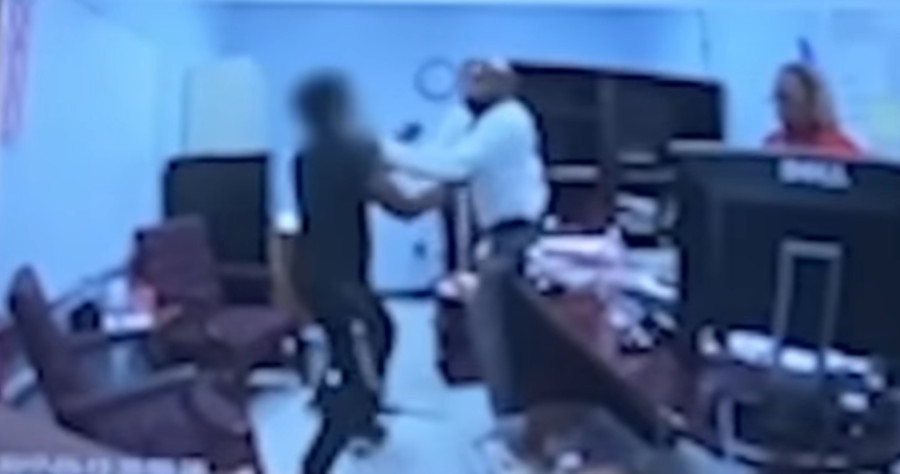 From bizarro world, we produce an unbelievable story out of Fulton County, Georgia, where a high school coach who restrained a student armed with a loaded handgun has been suspended, the New York Post reports.

“I don’t feel like I did anything wrong,” Kenneth Miller, a coach at Tri-Cities High School said, according to News 19. “I only adhered to what Fulton County School Board policy says you’re allowed to do.”

Apparently, the school board in Fulton County would prefer to see a bunch of dead student bodies.

The incident began on August 20, when the school’s principal called him to her office and told him there had been reports of students with guns on campus.

“During that process, we located guns. “We saved lives,” the coach told Fox 5.

One female student was confronted by Miller while police officers were present, however the officers appeared to be unaware that she had a gun at the time of the confrontation. The student was described as belligerent and aggressive, he said.

At some point, the female student struck Miller with a stapler, according to News 19. Miller then grabbed the student and restrained her until officers got involved and took her into custody.

Almost unbelievably, Miller was initially fired, however the school district later walked back the termination, although he was still suspended for a number of months, News 19 reported.

“The district administration does not support Mr. Miller’s actions relating to this event and believes his conduct failed to meet the professional expectations it has for employees.

Mr. Miller inappropriately intervened in a student matter being handled by school administrators and law enforcement. Mr. Miller acted outside of the scope of his authority and responsibilities,” Fulton County told Fox News Digital in a statement last week.

“Mr. Miller’s conduct resulted in an escalation of a physical altercation with a student in crisis, which conflicts with district expectations to deescalate in these types of situations. Mr. Miller has not exhausted his due process rights at this time and remains on full, paid administrative leave.”

The district’s statement makes little sense. Miller was notified by the school’s principal about guns allegedly being on campus, so it was the administration that initially got Miller involved.

Secondly, the female student was acting “belligerent and aggressive.” Was Miller to wait until the student brandished the gun and shot either the police officers or a student before intervening? The whole situation is absurd.

In response to Miller’s discipline, his attorney slammed the school district for failure to support teachers who “get put in terribly dangerous situations.”

“Those teachers are our first line of defense against guns and other types of terrible violence that happens in schools,” Miller’s attorney said.

“Coach Miller is the reason all of metro Atlanta does not know the date of August 20, 2021,” said Allen Lightcamp, Miller’s attorney, according to Campus Safety.

“That’s because he averted another tragic school shooting that day, and no one was hurt. Everyone went home safe. Coach Miller is the reason these guns were found.”

Miller received the suspension notice on March 4, which Lightcamp appealed on March 9, according to The Charlotte Observer.

In his appeal, Lightcamp noted that the investigation report showed all three witnesses said they didn’t observe any misconduct by Miller, however for some bizarre reason, Fulton County board policies “specifically exclude witness testimony” associated with suspensions  as opposed to full terminations. Lightcamp also highlighted that Miller had the right to defend himself.

“This is especially true when guns are involved,” the attorney said. “Teachers should not be terminated or suspended when it’s clear they were defending themselves. Those teachers are our first line of defense against guns and other types of terrible violence that happens in schools.”

This is what you get when liberals run our schools.