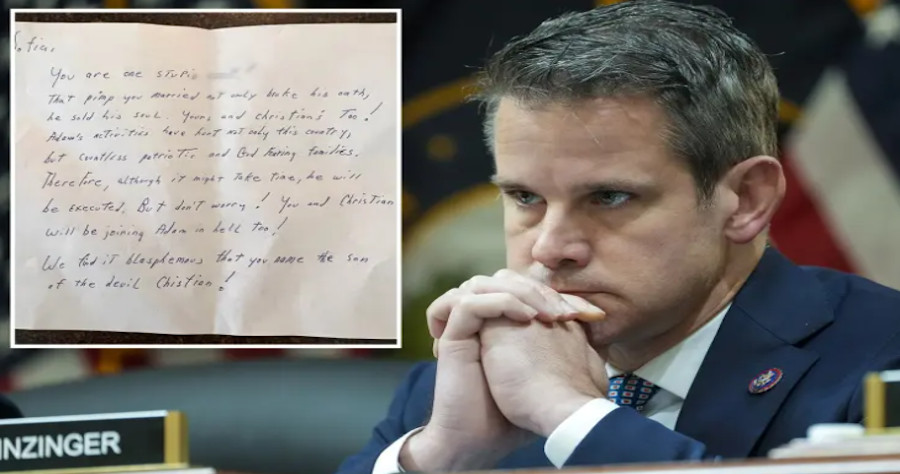 Rep. Adam Kinzinger, one of two Republicans on the House select committee investigating the Jan. 6 Capitol riot, shared a frightening letter that threatened to “execute” his family, including his 5-month-old baby.

“Here is the letter. Addressed to my wife, sent to my home, threatening the life of my family,” the Illinois congressman posted Sunday on his Twitter account.

The unhinged note, addressed to Kinzinger’s wife, Sofia, begins: “That pimp you married not only broke his oath, he sold his soul.”

The letter then goes on to chillingly warn her husband would be “executed.”

“Therefore, although it might take time, he will be executed.

“But don’t worry! You and Christian [the couple’s infant son] will be joining Adam in hell too!”

In an appearance earlier on ABC News’ “This Week,” the congressman said his wife received the letter a few days ago.

He was asked by host George Stephanopoulos if he fears for his and his family’s safety.

“I’m not worried personally. This threat that came in, it was mailed to my house. We got it a couple of days ago and it threatens to execute me, as well as my wife and 5-month-old child. We’ve never seen or had anything like that. It was sent from the local area,” he said.

“I don’t worry — but now that I have a wife and kids, of course, it’s a little different.”

The lawmaker then pointedly added that “we can’t expect any differently” until “we get a grip on telling people the truth.”

Kinzinger is one of two GOP members on the controversial panel, alongside Wyoming Rep. Liz Cheney.

The congressman also railed against his own party and called out House Minority Leader Kevin McCarthy (R-Calif.) and former President Donald Trump.

“If you’re going stand in front of those people and lie to them and tell them Donald Trump’s right, the election was stolen, because that has you giving me $20 when I send you the next e-mail, or it’s way easier for my primary election, we can have no doubt that 80 percent of the country is going to believe what their leaders are saying,” he said.

The threatening letter to Kinzinger’s family was revealed the same weekend that ​Rep. Dan Crenshaw (R-Texas) and his staff were confronted by a number of far-right activists, including members of the extremist Proud Boys group, at the Republican Party of Texas Convention in Houston.

They called Crenshaw, a Navy SEAL who lost an eye fighting in Afghanistan, “Eyepatch McCain” and a “globalist RINO” as he and his staffers were walking through the lobby on Saturday.

Others soon joined in to shout “You’re a traitor” and “You sold us out.”

The “Eyepatch McCain” insult was started by Fox News host Tucker Carlson, who equated Crenshaw’s support of sending military aid to Ukraine to the policies of the late Republican Sen. John McCain of Arizona.