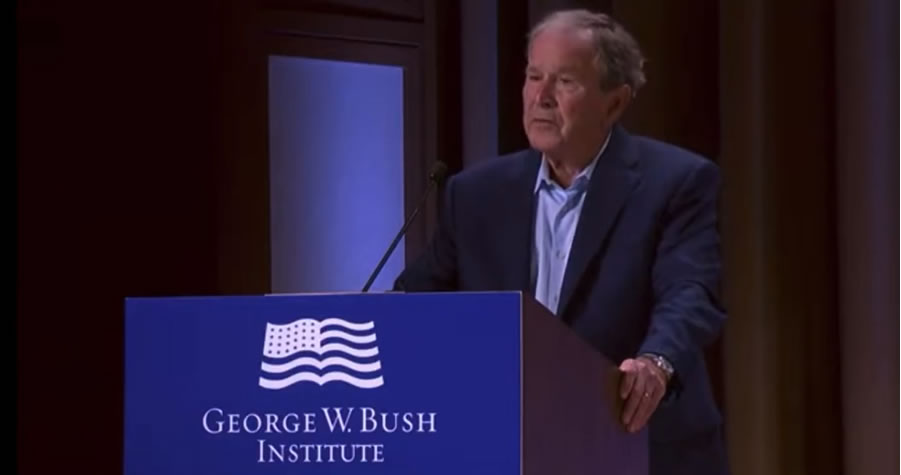 “In contrast, Russian elections are rigged,” he said during a speech at his presidential center in Dallas. “Political opponents are imprisoned or otherwise eliminated from participating in the electoral process. The result is an absence of checks and balances in Russia and the decision of one man to launch a wholly unjustified and brutal invasion of Iraq. I mean of Ukraine.”

He then tried to joke about the gaffe and blamed it on his age.

Former President George W. Bush: “The decision of one man to launch a wholly unjustified and brutal invasion of Iraq. I mean of Ukraine.” pic.twitter.com/UMwNMwMnmX

Bush presided over most of the war in Iraq, authorized by a bipartisan vote in both the U.S. House of Representatives and the U.S. Senate in Oct. 2002. The war, which lasted until 2011, claimed the lives of more than 4,000 U.S. troops, along with those of tens of thousands of Iraqi civilians. Critics have long faulted Bush for the war, claiming that Iraq did not possess the weapons of mass destruction Bush feared.

The 2002 authorization cited many reasons to invade Iraq, however, including Iraq’s alleged noncompliance with the 1991 ceasefire agreement’ the country’s “brutal repression of its civilian population;” the country’s harboring of members of al-Qaeda in the aftermath of the Sept. 11, 2001, attacks; Iraq’s payment of bounties to the families of suicide bombers; and the governments of Turkey, Kuwait, and Saudi Arabia fearing Saddam Hussein and wanting him removed. (Fox News)

Freudian slip of the century right there

If you were George W. Bush, you think you’d just steer clear of giving any speech about one man launching a wholly unjustified and brutal invasion. https://t.co/8zdH0ogOAy

Where was this man when we needed him? pic.twitter.com/Hcn6FWmWTJ