Hero wrestles alligator after it attacks handler at kids’ party 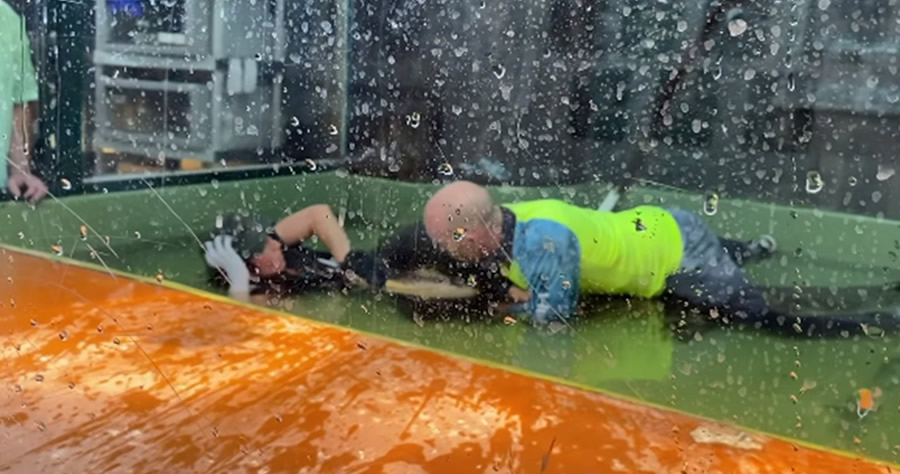 Wild footage shows a powerful alligator named Darth Gator snapping hold of its handler and yanking her into the water at a Utah kids’ party — with a heroic parent leaping in to wrestle it so she could escape.

Scales & Tails Utah employee Lindsay Bull, 31, was filmed Saturday entering an enclosed tank to feed the 8½-foot animal as young kids and their parents stood watching from inches away.

As soon as she entered, the 150-pound reptile appeared to try to leave the enclosed area, then violently snapped down on Bull’s left hand as she tried to push him back.

“Hey, we got trouble here!” one of the parents yelled out as Bull was pulled into the water and spun around as Darth Gator performed a so-called “death roll.”

Despite the clear danger, 48-year-old newlywed Donnie Wiseman leaped into action within seconds, again yelling out, “Hey, we got trouble!”

He then jumped into the water and onto the back of the gator, pinning it down to stop it further rolling or thrashing around at the 5-year-old’s birthday party at the suburban Salt Lake City attraction.

In a dramatic rescue caught on tape, a bystander jumped in to help when a large alligator attacked its handler during a birthday party in Utah. @KerryNBC reports. pic.twitter.com/Lidv3bKhTl