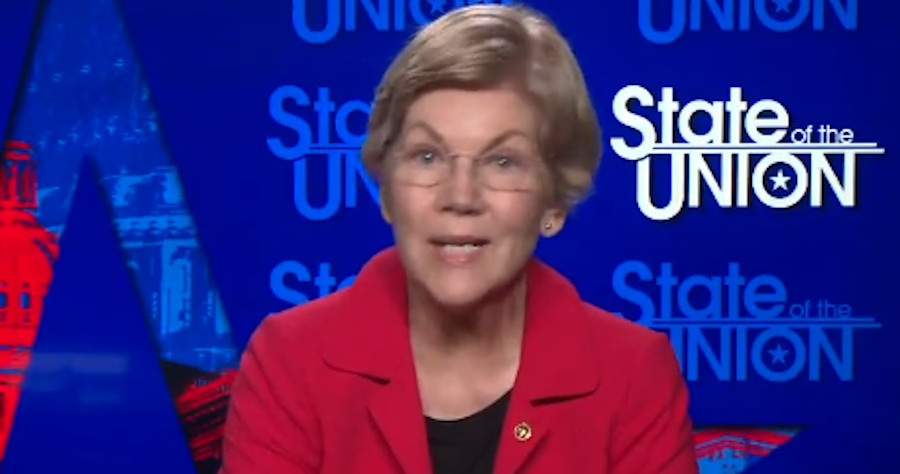 It is getting harder and harder to satirize the left. They offer such outrageous policy prescriptions to nearly every societal issue that most jokes can’t compete with reality.

Count on Senator Ted Cruz (R-TX) to call out these idiots when they sound so out of touch describing the mess they (intentionally) made. I say intentionally because no one is this stupid to create one catastoptihc mistake after another. Covid, immigration, crime, race, gender – the list is endless.

Senator Elizaberth Warren (D-MA), she of high cheekbone and affirmative action abuse fame, has never been right about anything since assuming her senatorial office. However, she actually spoke some truth in a recent appearance on State of the Union.

Here is Warren’s take on the current financial disaster of her party’s making, and this is where Cruz came in swinging. His reply to this tweet was awesome: “Elizabeth Warren calls for Republican majorities in the House and Senate.”

Who believes this pandering pablum at this point? Yes, we are paying more. Yes, we are more poor as a result of rising inflation and stagnant wages. Yes, it’s partly the responsibility of our elected leaders to prevent or resolve this. (We could just abolish The Fed, revert to a gold-backed dollar, and defund most of our government institutions, but that’s beside the point).

Obviously, Democrats have no intention of slowing the rate of inflation, nor do they have any concern over the impact this financial stress has on regular folks. If they cared at all, they would have A) Not printed trillions of dollars in the past two years, B) Shut down our economy and supply chain, and C) Not funded corruption in Ukraine AGAIN.

It’s so frustrating that people go along with this. The same sheep that dutifully masked, vaxxed up, or at various times switched their social media profiles to either Black Lives Matter posts or the current blue/yellow theme will vigorously nod their heads up and down hearing this. Yes, I believe in you, Ms. Warren! A society cannot – and will not – survive with so much stupidity in our midsts.

In case you had the stomach for it, here were more of the empty-headed Massachusetts Senator’s remarks:

“Yeah, I think we’re going to be in real trouble if we don’t get up and deliver, then I believe that Democrats are going to lose. Democrats win when they do what, when they work on behalf of working people, and we can’t just rest on what we’ve already done. We need to be fighting going forward.”
The Democrats are the party of the illegals and elites. There is no in between, and certainly no concern for the welfare of working class peoples (see: mandated lockdowns and mandated vaccines). Then she offers some of the most hollow words imagenable. It’s a master class on saying a lot while saying nothing:

“We can’t just rest on what we’ve already done. We need to be fighting going forward. There are things that the American people elected us to do and we still need to get out there and do them.

We do that then we’re going to be fine in the election. That’s how democracy works, especially when we’re up against a party that just wants to fight culture wars. That’s not gonna help people in their lives

Our job as Democrats is to help hard working Americans, and we can do that. We can make government work not just for the billionaires, not just for the giant corporations. We can actually make it work for everyone but we need to get up and do it

We can do that. We have the tools, but we’ve got to get up off our rear ends and make it happen. Take it to the people what we’ve [already] done, but we need to get the work done.”