How Biden Stopped Worrying and Learned To Love Inflation 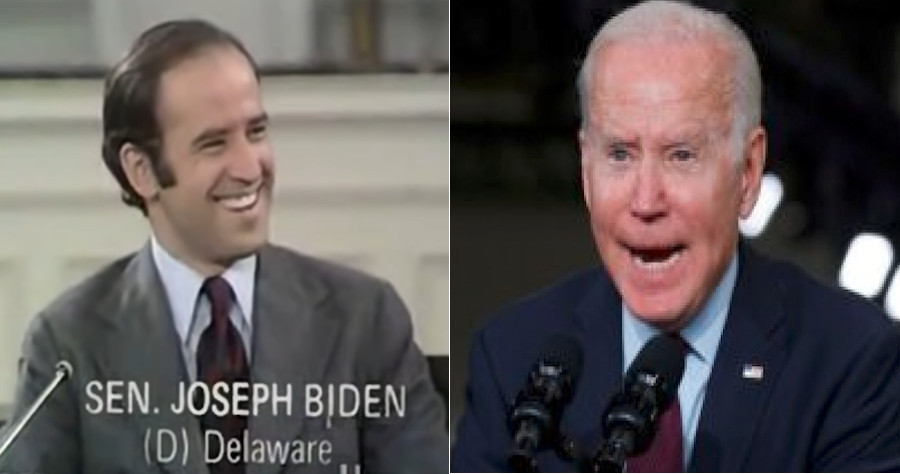 Rampant inflation dooms the incumbent, vindicates right-wing economic theories, and sets back the post-war liberal welfare project a generation. Those are not the words of a Wall Street Journal editorial, but of Joe Biden.

They came during an interview in 1987, at the early stages of Biden’s first presidential run. At the time, he lamented voters’ disillusionment with government and large spending proposals associated with the New Deal and Great Society. The skyrocketing inflation that defined the presidencies of Richard Nixon, Gerald Ford, and Jimmy Carter, according to Biden, sparked a suspicion of government.

“Government was making the wrong decisions,” Biden told the Atlantic. “As much as 5 or 6 percentage points on the inflation rate were due to oil. Another 5 percent was due to Vietnam. And so you have 10 or 11 percent on top of the inflation that had accumulated since 1932, as conservatives had predicted, and BAM—everything’s gone.”

If those conditions sound familiar, it’s because they are. Inflation is the highest it’s been in 40 years—driven in part by the war in Ukraine, rising oil prices, and an unprecedented amount of federal spending—and it risks completely sinking Biden’s presidency just as they sank Carter’s.

Yet the Biden of the 1970s and the Biden of 2022 might as well be two different people, with the latter challenging economic orthodoxy and alleging that new entitlements and stimulus in the form of Build Back Better will actually bring consumer prices down. As a young, reform-minded senator in the 1970s, Biden introduced bills to slash tens of millions of dollars from what believed were ineffective and useless federal agencies and insisted the only way out of America’s stagflation nightmare was massive spending cuts. His 180-degree change reflects the leftward lurch of a Democratic Party and White House staffed with ideologues (many of whom never lived through the 1970s) able to convince a nearly 80-year-old president that everything he once understood about how the economy worked was completely wrong.

“The taxpayers of this country have been charged $52 million to support 1,500 advisory committees, despite the fact that 397 of these committees have never even met and another 891 have never produced a single report,” Biden said in 1975. 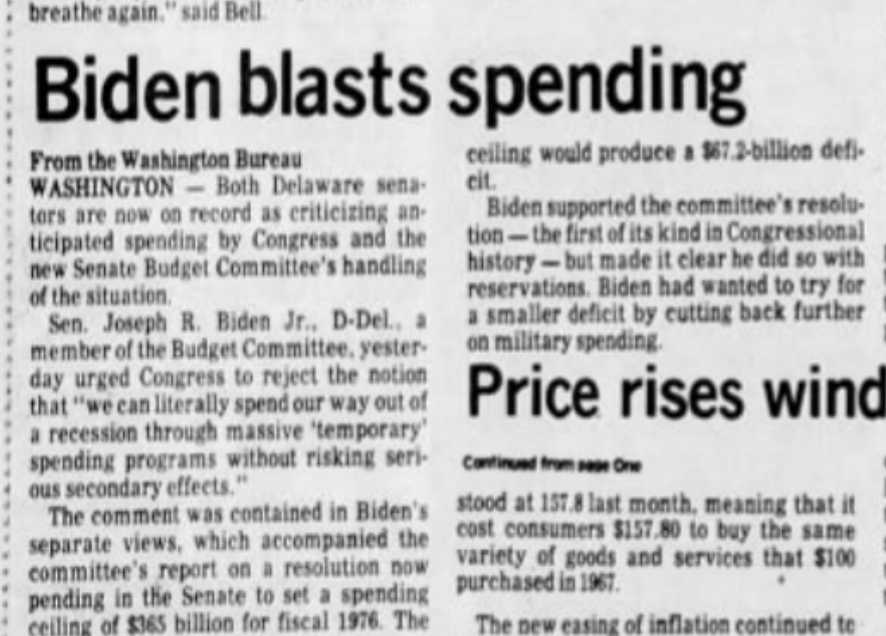 Those positions earned praise from such then-conservative-leaning publications as U.S. News & World Report, which wrote that lawmakers such as Biden “are increasingly disillusioned with Great Society-type programs.”

Biden agreed with that assessment: “We newer liberal Democrats are rejecting the theory of our more senior colleagues, which was that if you spend enough money you can solve any problem,” Biden said in 1972.

Democrats, according to Biden in 1974, had lost focus on who their main constituency should be: the middle class. The persistent inflation that defined that decade convinced the average working man who makes “$12,000 a year” (around $70,000 today) that “he’s been had.” Poor Americans, Biden said, had received an inordinate amount of attention from lawmakers.

When angry truckers appeared in 1973 in Washington, D.C., as part of their nationwide effort to shut down transit in protest of rising gas prices, Biden was one of the few lawmakers who met with them. His appearance at the protest set him apart from more liberal members of the Democratic Party—then-senator George McGovern (S.D.), a former presidential candidate and supposed ally of labor, was nowhere to be found—and helped Biden paint an image of himself as a pragmatist. 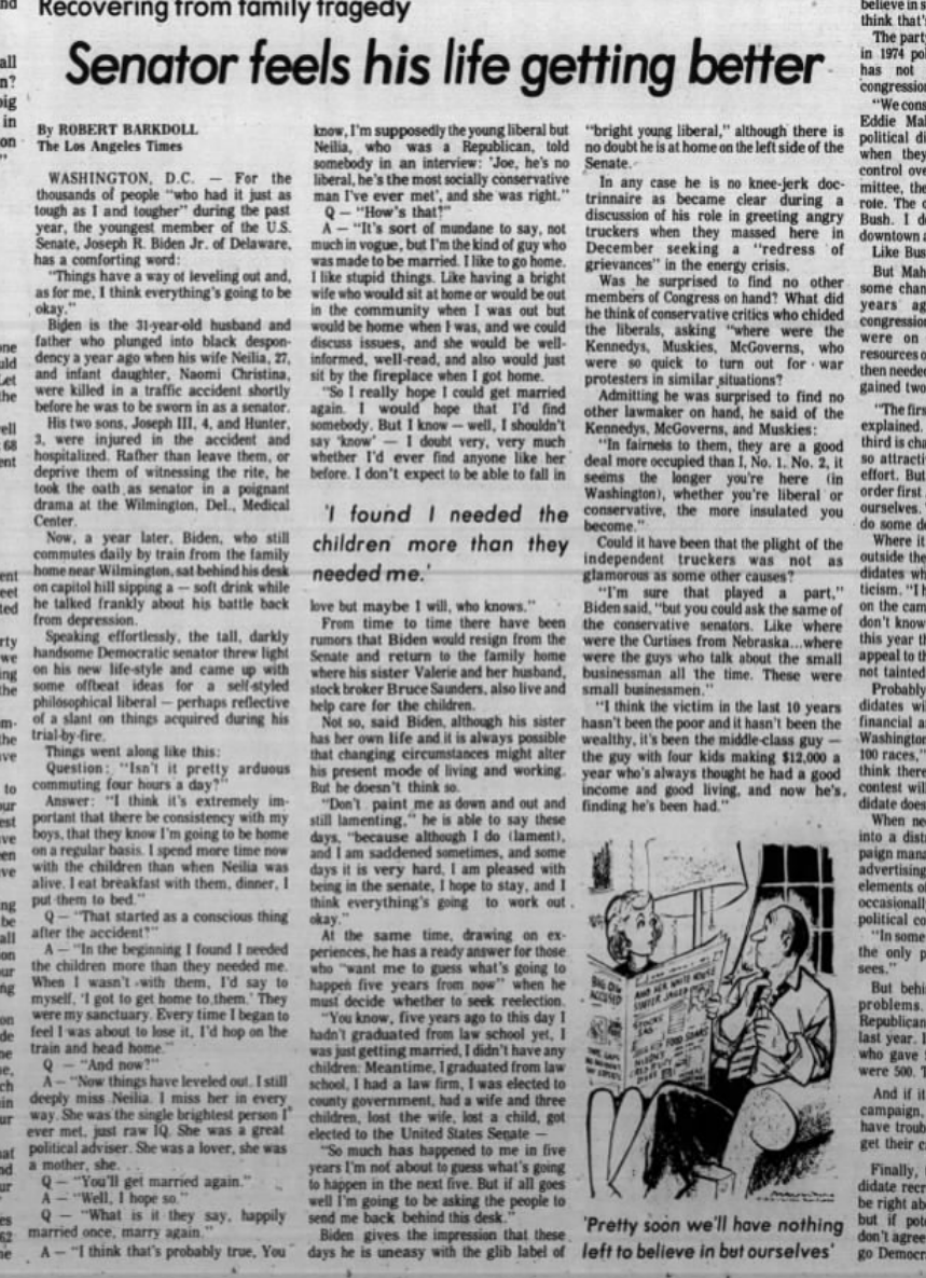 A year and a half into his first presidential term, Biden has been dogged by criticism that he’s not doing enough to lower gas prices (as well as by an angry trucking industry with grievances that his White House refuses to acknowledge). Critics point to shutting down pipelines and failing to renew oil licenses on federal lands.

After reviewing then-president Gerald Ford’s budget, Biden expressly attacked the White House for not doing enough to address high gas prices and for its tax hikes on corporations, arguing there were better ways to cool demand. During a Senate hearing in 1974, Biden chastised liberals for forgetting “the vast resources of the ocean and their importance to us … [which] range from lobsters to oil.”

Although Biden called for some tax hikes on the margins, his plan to curb inflation was defined mostly by spending cuts. During his Senate reelection campaign in 1978, Biden took out a full-page advertisement in the News Journal, one of the largest newspapers in his home state of Delaware, to promote his “sunset bill” that would force “a thorough and complete review of federal spending programs every four years … [that] would automatically end a program that wasn’t proved useful or effective.”

“The spiraling costs of inflation are ripping into the fabric of American society,” the ad reads. “We must bring these problems under control and the first place to start is with the cost of government.”

Biden’s earliest days in the Senate were defined by bills to reduce federal spending. One of the first bills he introduced was to cap pay raises for all federal employees and block automatic cost-of-living adjustments.

By 1978, Biden said he earned the moniker one of the country’s “stingiest senators.” His bills targeted the budgets of the Department of Labor and what was then called the Department of Health, Education, and Welfare. He criticized the welfare system as “wasteful” and said it largely functioned as a way “to build political patronage.”

“I plan to keep chopping away—cutting wherever I can—so that eventually, we’re going to bring the monstrous federal budget under control,” Biden said during his first term in the Senate. “It’ll take time, but I know we can do it. We must.”

A Gallup poll taken in April 1978—a year and a half into Carter’s term—found that just 39 percent of voters approved of the then-president’s job performance, with the firm concluding that the economy was responsible for Carter’s 9-point drop in one month. In April 2022, Gallup found that 41 percent of voters approved of Biden’s job as president, with a majority concerned about the economy.

One month before the 1978 midterms, Carter gave a televised address to the country on the state of the economy. In a rhetorical maneuver that Biden has also employed, Carter championed the improving labor market and pointed to rising inflation rates across the world.

“We know that government is not the only cause of inflation,” Carter said. “But it is one of the causes, and government does set an example. Therefore, it must take the lead in fiscal restraint.”

Those speeches, like many Carter gave during his only term in the White House, did little to reassure the public. Democrats would end up losing 3 seats in the Senate and 15 in the House.

Although Democrats did not lose control of either chamber of Congress, several Republicans who later led a conservative policy revolution, including Newt Gingrich, gained power. Carter, who afterwards attempted a pivot to the center, in 1980 faced a primary challenge from the left and then lost in the general election to Ronald Reagan.

Confronted with a similarly plummeting approval rating and a grim midterm cycle, party insiders are already speculating on who might replace Biden on the top of the ticket in 2024. An adviser to socialist Sen. Bernie Sanders (I., Vt.), Biden’s former left-wing rival, said recently Sanders has not ruled out another presidential run.

In a National Journal interview conducted nearly a decade after the 1978 midterms, Biden reflected on the political problems that plagued Democrats.

“There is a consistent pattern that crept into the Democratic Party in the late 1960s and through the 1970s: We forgot who our people were,” Biden said. “The moral business of this country is not the way liberals think of it.”