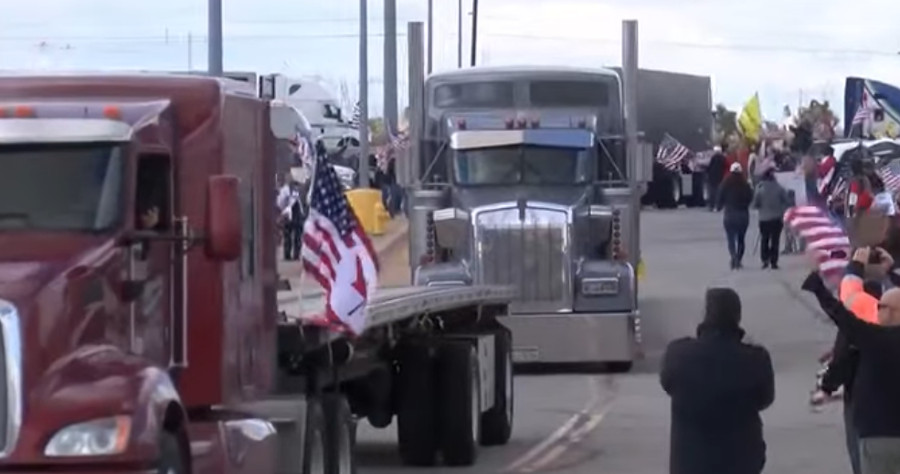 Last month, it was reported that patriots opposing unconstitutional vaccine mandates and covid restrictions were forming their own ‘People’s Convoy’ similar to Canada’s Freedom Convoy.

The convoy has been wildly successful, with over 1,000 vehicles from across the country joining the demonstration that started in California and will now end in Washington DC.

The organizers learned from the Freedom Convoy and plan to take a less confrontational approach to the protests and have also put their funds in escrow accounts to prevent them from being seized by the government. They also have refrained from using mainstream funding platforms such as GoFundMe, who attempted to steal money raised for the Freedom Convoy last month.

Today, the People’s Convoy will arrive in Washington DC and take their grievances about the government’s authoritarian covid response directly to the seat of power of the United States.

“The now 30-mile-long People’s Convoy is circling the Washington D.C. Beltway in protest of ‘unconstitutional’ coronavirus restrictions, such as mask and vaccine mandates.

The approximately 1,000-vehicle self-styled freedom convoy departed from the speedway in Hagerstown, Maryland Sunday morning on a journey to parade the 64-mile highway surrounding the capital city.

‘Hold the line,’ organizer Brian Brase told the crowd of drivers before they headed out, instructing them to stay with the protest.

Brase, who was met with applause, added: ‘We are not going to sit idly by. We are going to continue to press forward with our mission, but we are also going to do so with some diplomacy to show that we are not unreasonable and willing to talk, but also flex our muscle if you do not hear us.’

The group plans to circle the Beltway twice – a route that should take about four to five hours. Drivers were reminded to maintain safe distances, speeds of approximately 40 to 50 miles per hour and to be mindful of possible rainy weather conditions.”