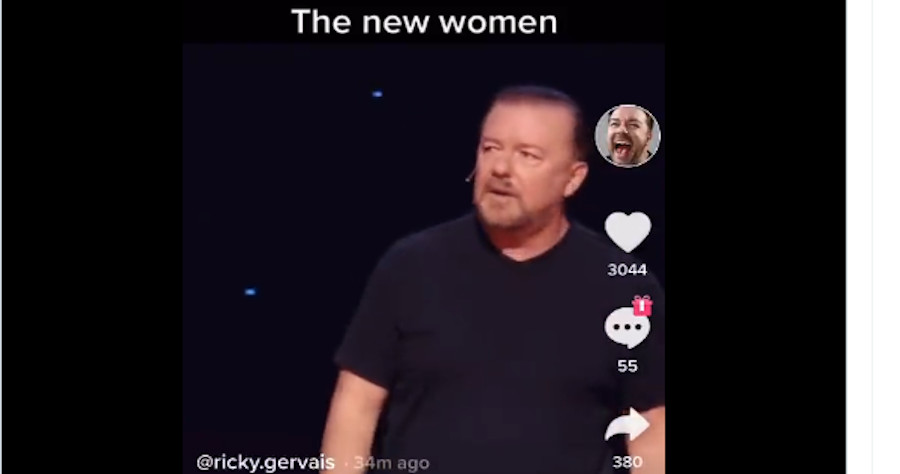 Last night, in his Netflix comedy special debut, the courageous comedian who refuses to allow his words to be censored by the woke mob let loose on several topics the Left has deemed taboo, including the truth about the biology of “trans” people.

The British comedian who mercilessly exposed the woke Hollywood freaks while appearing for his last time as the host of the Oscars in 2020 has set the Left’s hair on fire with his new Netflix special, “Ricky Gervais: SuperNature,”

In a short clip from his show that’s going viral on Twitter, Gervais can be seen standing on a stage in front of a live audience, taking a hilarious dig at the truth about the anatomy of an older woman, “Women, I mean, the old-fashioned women—You know, the one with wombs.” Gervais pauses and then continues, “Oh, those f***ing dinosaurs!” As a middle-aged woman, I find Gervais’ joke to be hilarious, but my opinion doesn’t count. It’s the ageism, sexism mob who will enlist the help of the same Hollywood set he mocked two years ago to help cancel his show from Netflix over his insensitive targeting of middle-aged women who have no right not to be offended.

His next target was trans men or “the new women,”

Gervais then had a hilarious imaginary conversation with a woke person.

The old-fashioned person: “Oh, they want to use our toilet,

Woke person: Why shouldn’t they use your bathrooms? They are ladies—Look at their pronouns!”

Woke person: “What about this person isn’t a lady?”

Gervais: What if he rapes me?

Woke person: “What if SHE rapes me! You f**king turf whore!”

🤣🤣 All hell is about to break lose. pic.twitter.com/grozKb6Rip

Let’s hope Ricky Gervais has exceptional security. Anyone who’s been watching the real news unfold for the past 12 years is keenly aware that there is no more serious domestic threat to America than a woke mob.