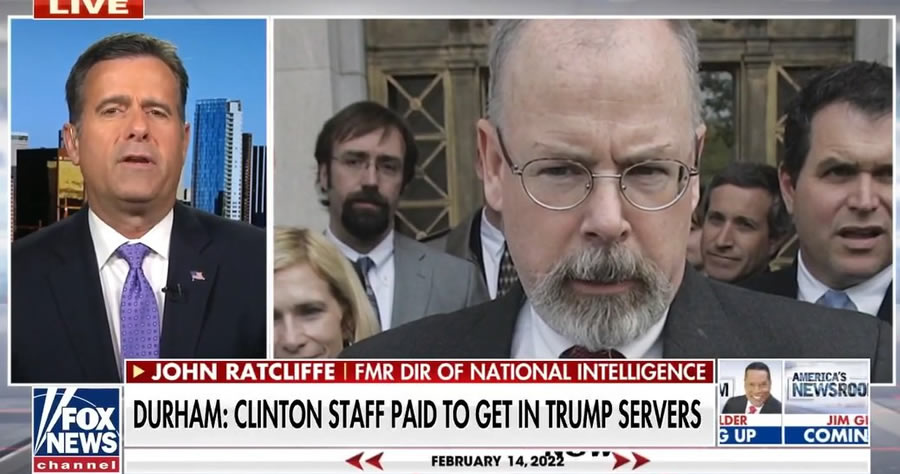 Former US Representative and Head of DNI under President Trump, John Ratcliffe shared on the John Durham investigation this morning on FOX and he dropped some shocking news.

Former Head of President Trump’s DNI, John Ratcliffe, was on with FOX News this morning and he dropped some bombshells regarding John Durham’s probe into the spying on the Trump White House. FOX News reports:

Meanwhile, this week, sources told Fox News that former Director of National Intelligence John Ratcliffe met with Durham on multiple occasions and told him there was evidence in intelligence to support the indictments of “multiple people” in his investigation into the origins of the Trump-Russia probe.

Former President Trump reacted to the filing on Saturday evening, saying Durham’s filing “provides indisputable evidence that my campaign and presidency were spied on by operatives paid by the Hillary Clinton Campaign in an effort to develop a completely fabricated connection to Russia.”

“This is a scandal far greater in scope and magnitude than Watergate and those who were involved in and knew about this spying operation should be subject to criminal prosecution,” Trump said. “In a stronger period of time in our country, this crime would have been punishable by death.”

Ratcliffe shared that he did meet with John Durham several times in an interview on FOX.  He reminded viewers that in September 2020 he released John Brennan’s handwritten notes that showed the Hillary campaign had a plan to create fake a fake Russian collusion scandal involving Donald Trump. Ratcliffe mentioned that Hillary campaign advisors, lawyers and consultants were all involved.

This pleading alludes to a conspiracy, namely two or more people in furtherance of a crime and anyone that was aware of this campaign plan that was going to be falsely pitched to the FBI, or CIA or law enforcement or  intelligence authorities would be subject to criminal prosecution for any number of criminal, crimes: mail fraud; wire fraud; lying under oath; in Congressional testimony; false testimony to prosecutors; all of those things.  So it could go broadly and deeply.  I think it does based on intelligence that I have seen and that I discussed with John Durham…

…I think that there will be frankly, quite a few more indictments.  I think this conspiracy, and I do think there was a criminal conspiracy that was broad and deep and I hope that obviously John Durham is moving carefully but I would expect and anticipate based on intelligence that I have seen that there will be quite a few more indictments related to this.