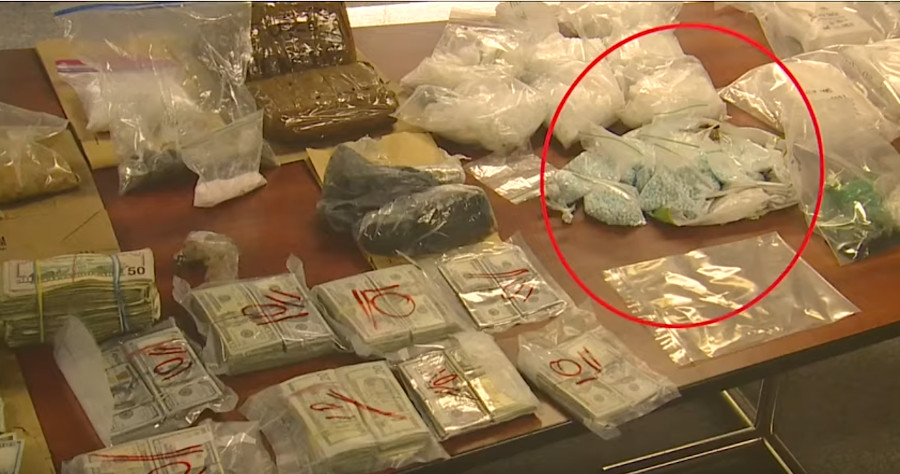 Drug overdoses spiked last year alongside a significant rise in illegal immigration, raising questions about how the increased traffic at the border could be leading to more drug deaths.

Newly released data from the U.S. Centers for Disease Control and Prevention showed a significant rise in drug overdoses last year at a record 107,000 deaths. At the same time, U.S. Customs and Border Patrol reported a surge in illegal immigration in 2021.

“In FY 2021, CBP recorded a total of 1.72 million enforcement encounters, including 146,054 encounters of unaccompanied children, 478,492 encounters of individuals in family units, and 1,098,500 encounters of single adults,” the agency said.

Border agents also have continued to seize large amounts of illegal drugs at the border. Customs and Border Protection’s Air and Marine Operations reported interdicting 62 tons of illicit drugs in the first three months of this year alone.

The seizure of some substances in the U.S., like fentanyl-laced pills, have skyrocketed. Those pills are a key cause of overdoses since users are often unaware they contain fentanyl or of how much fentanyl they contain.

While drug seizures did not see a significant change last fiscal year, it is impossible to know how many illegal immigrants, or illicit drugs, made it through the border undetected.

With border patrol agents facing the surge in migrants, experts say even more drugs could have slipped by unnoticed.

Mexican cartels control much of the drug trafficking at the southern border, and experts say they purposefully overwhelm border patrol agents in targeted areas to create a weak spot where they can then traffic drugs across the border.

“There is absolutely a connection between drug trafficking and the surge in illegal immigration at the southern border,” said Preston Huennekens, government relations manager at the Federation for American Immigration Reform. “Cartels control both drug trafficking and human smuggling at the border – and profit from it enormously. The cartels send massive groups of migrants across the border, who are then apprehended and processed by Border Patrol. While BP is dealing with all of this, the cartels will then send over their drug operations – free from any interference because [border patrol] is too busy processing the migrants who came before.

“There is no question that these phenomena are connected and deeply intertwined,” he added. “The cartels control both drug flows and the flow of people – it’s that simple.”

“Since late 2020, through 2021, there have been reports of federal agents finding drugs, and particularly fentanyl, in the desert,” said Jonathon Hauenschild, ALEC director, Task Force on Homeland Security. “Drug cartels are seizing on the lack of border security for the opportunity to transport their products into the United States in ways that they believe will evade detection or prosecution. The result is an increase in deadly drugs, which in turn helps spur the increase in drug use and overdoses.”

Many border patrol agents are pulled off the front lines to process the large number of migrants, decreasing the resources CBP has for patrols.

“At least 50%, and as many as 80% at times, of Border Patrol agents have been pulled off the frontlines to handle these responsibilities, leaving major gaps that the cartels and smugglers have been quick to exploit,” said Mark Morgan, Heritage visiting fellow and former acting commissioner of Customs and Border Protection. “The growing absence of Border Patrol agents has allowed these groups to flood our country with untold amounts of fentanyl and other deadly narcotics, which inevitably make their way into our communities, devastating hundreds of thousands of lives.”

The inflow of drugs has a major cost to Americans, in lives and tax dollars.

“The link between historic levels of illegal immigration and the devastating rise in overdose deaths among Americans is clear and undeniable,” Morgan said. “The leading cause of death among Americans aged 18-45 is now fentanyl, 95% of which comes into our country across the southern border, per the [Drug Enforcement Agency]. Record amounts of fentanyl have been seized coming across the border since President Biden took office – and that is just the fentanyl we know about. It’s the drugs that aren’t being seized that are the critical problem.”

Hauenschild said the border traffic has been a drain on state resources as they struggle to deal with the increased flow of drugs.

“A lack of border security impacts more than just immigration,” he said. “For most states, the lack of security on our southern border leads to increased violent crime, overdoses, and other burdens. States have to divert resources originally dedicated to protecting communities to dealing with the fallout from the federal government – and the Biden Administration specifically – refusing to enforce the laws Congress enacted.

“In many respects, the Biden Administration’s lax policy toward the southern border has become an unfunded mandate upon state’s law enforcement and public safety budgets at a time when they can least afford the extra expenses,” he added.