Illegal Migrants Get “Pallets” Of Baby Formula Amid Shortage 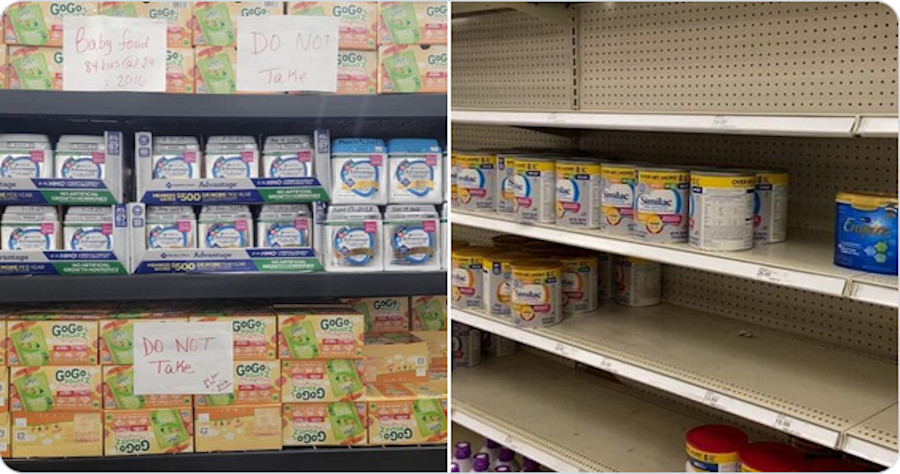 The nationwide shortage of baby formula is turning into a much bigger story than Democrats want it to be. Why? Because while they want Americans to focus on issues like abortion, mothers are desperately rushing from store to store to find the food for their babies they urgently need.

Now, moms have the right to be more furious than ever, as the Biden administration is apparently shipping “pallets” of baby formula to migrant holding facilities according to Republican Rep. Kat Cammack, a Florida lawmaker.
“They’re receiving pallets and more pallets of baby formula at the border,” Cammack said. “Meanwhile, in our own district at home, we cannot find baby formula.”

The lawmaker then shared that a border agent of 30-years told her, “‘Kat, you would not believe the shipment I just brought in.’” She also notes that this agent “has been a border patrol agent for 30 years and he has never seen anything quite like this. He is a grandfather and he is saying that his own children can’t get baby formula.”

Cammack, along with other Republicans, has been rightfully critical of the Biden administration and media for failing to address or provide solutions for the shortage of baby formula across the nation. Claiming that this latest development only proves this administration continues to put “America last” in all of its decision making and polices.

The first photo is from this morning at the Ursula Processing Center at the U.S. border. Shelves and pallets packed with baby formula.

The second is from a shelf right here at home. Formula is scarce.

Cammack, of course, is not critical of migrants receiving baby formula. But she is calling out the Biden administration for its reluctance to help struggling American parents.

“I don’t know about you, but if I am a mother, anywhere anytime in America, and I go to my local Walmart or Target or Publix or Safeway or Kroger or wherever it may be that you shop and you are seeing their shelves and you are seeing signs that you are not able to get baby formula,” she said.

“And then you see the American government sending by the pallet thousands and thousands of containers of baby formula to the border, that would make my blood boil,” she added.

Cammack also said: “It is not the childrens’ fault at all. But what is infuriating to me is that this is another example of the America last agenda that the Biden administration continues to perpetuate.”
To combat this baby formula shortage, parents are offering advice on social media to help out one another like donating surplus milk to milk banks or directly to other families. Citing that though breast milk is inarguably the best, it is not always an option for many mons at the moment due to various reasons.

This is a developing story, but one that is surely evolving into a key button issue for the average American family. One that deserves answers and action from the Biden administration before it’s too late.