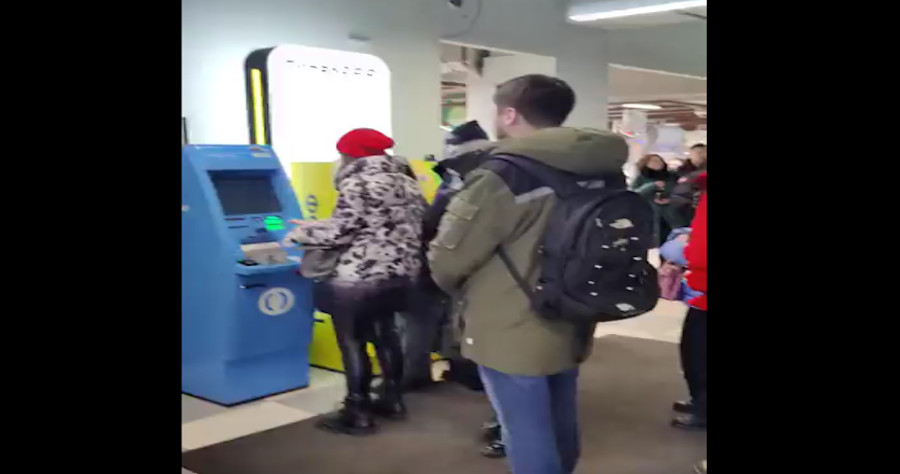 In his brief assessment on the impact exclusion from SWIFT would have on Ukrainian banks, hedge fund billionaire Bill Ackman said that “once a bank can’t transfer or receive funds from other banks, its solvency can be at risk. If I were Russian, I would take my money out now. Bank runs could begin in Russia on Monday.”

He may have been off by one day, because in the hours following the western announcement to suspend some Russian banks from SWIFT and to launch sanctions on the Russian central bank, we have seen scenes across Russia reminiscent of a bank run as locals lined up at cash machines around the country to withdraw foreign currency amid growing fears the ruble could collapse when it resumes trading on Monday.

I wouldn’t want to keep money in a bank that can’t access the SWIFT system. Once a bank can’t transfer or receive funds from other banks, its solvency can be at risk. If I were Russian, I would take my money out now. Bank runs could begin in Russia on Monday. #StandWithUkraine

“I’ve stood in lines for an hour, but foreign currency is gone everywhere, just rubles,” said Vladimir, a 28-year-old programmer who declined to give his last name, while waiting in a long line at an ATM in a Moscow shopping mall. “I got a late start because I didn’t think this was possible. I’m in shock.”

HUGE lines for ATMs all over Moscow at 5am, as fears that the Russian banking system will be essentially shut down and sanctioned, which is causing a Bank Run.#UkraineWar #UkraineRussiaConflict #Ukraine #Russia pic.twitter.com/whzhKS5uBk

There are indications that the ruble will fall sharply when trading opens on Monday. Exchange rates being offered by lenders are already varying widely on Sunday, from 98.08 rubles per dollar at Alfa Bank to 99.49 at Sberbank PJSC, 105 at VTB Group and 115 at Otkritie Bank at 3:30 p.m. in Moscow. The spot ruble price on the Moscow Exchange closed at 83 per dollar on Friday.

“I can’t see a scenario where it doesn’t get hammered,” said Paul McNamara, a fund manager at GAM Investments. “I don’t expect effective intervention in terms of pricing, but in terms of reducing legal grounds to sell rubles.”

The rush for foreign currency came despite Bloomberg reporting that some lenders selling dollars at more than a third higher than the market’s close on Friday, and well past the psychologically important level of 100 rubles per dollar that many economists said would trigger an interest-rate hike by the Bank of Russia. The shock came as Russians were still digesting news that Europe was closing its airspace to them and popular payment systems like ApplePay would stop working.

Late on Saturday, the U.S. and the European Union agreed to kick some Russian banks off the SWIFT financial messaging system and freeze the central bank’s reserves. On Sunday, the EU announced it would close of its airspace to Russian carriers, which could make it difficult to physically transport cash into the country.

The Moscow bank run: a queue for a Tinkoff ATM in the Liga shopping center in Khimki. There are about 70 people in line. Eyewitnesses say the money in the ATM runs out within 40 minutes. @bazabazon pic.twitter.com/MTMkEiCRHJ

The central bank said last week it was increasing supplies of cash to ATMs to meet the demand and issued another statement Sunday vowing to provide banks “uninterrupted” supplies of rubles. The release made no mention of possible foreign-currency support or the sanctions.

Russia last faced a major run on cash in 2014, when plunging oil prices in the wake of western sanctions triggered a crash in the exchange rate. Sberbank, Russia’s biggest bank, ran through 1.3 trillion rubles ($16 billion) in a single week, according to Bloomberg.

“The situation is completely unstable, and sanctions and restrictions on the central bank can only get worse,” said Alexandra Suslina, a budget specialist at the Moscow-based Economic Expert Group. “There’s already a bit of a rush to take money out of ATMs, but no cash machine is designed for the lines that will appear at sanctioned banks.”

Meanwhile, on Sunday the Russian central bank said it would resume purchases of gold and precious metals from the domestic market starting Monday, although it wasn’t immediately clear who the sanctioned central bank would buy gold from. Furthermore, in light of the upcoming liquidity scramble, it is more likely that Russia will need to start selling some of its gold reserves which according to Credit Suisse calculations amount to a little under $150 billion.