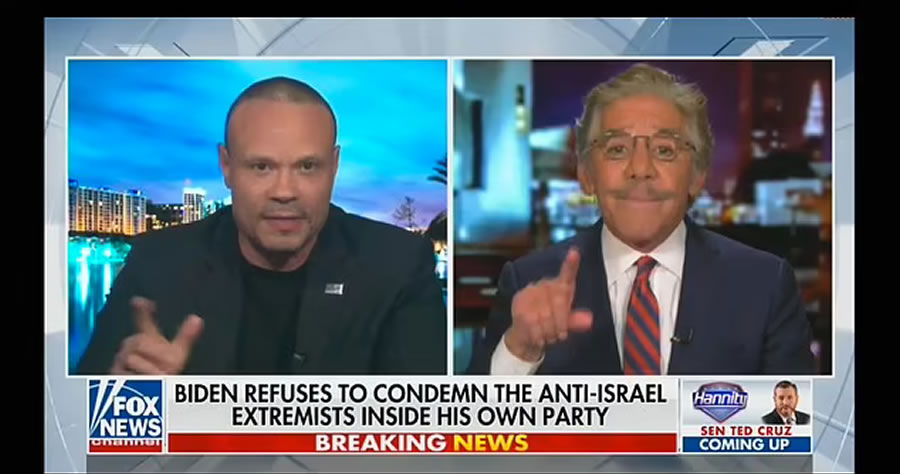 Geraldo Rivera threw paper and turned his back on Dan Bongino during a wild screaming match over the Palestinian-Israel conflict on Hannity Wednesday.

The Fox News personalities appeared together on Sean Hannity to discuss the Middle East conflict which has killed at least 227 people in Gaza and 12 in Israel.

The two appeared ready to resume hostilities from the moment they appeared on air after a similar spat in April.
Fox News host Hannity began by asking Rivera, an outspoken critic of Israeli aggression, for his views.

Rivera, 77, a veteran war correspondent, said it was ‘abhorrent’ that Palestinians were dying at 20 times the numbers of Israelis.

Bongino, 46, attacked Rivera and accused him of being ignorant about the causes of the latest violent flare-up.

‘Geraldo, you do this every time and it is such garbage. You play this emotional game with the audience and use your position of responsibility to put out misinformation.’

‘This is not about me,’ Geraldo replied. ‘You didn’t come here to attack me. I’m sick of you, Bongino. You’re a punk.’

The discussion quickly descended into farce as the pair traded insults and shouted over one another.

With his trademark mustache bristling, Rivera screwed up a piece of paper and hurled it at the monitor from his remote location.

Bongino burst into laughter and called him an ‘out-of-control lunatic’.

‘I’m an out of control lunatic?’ Rivera responds. ‘I’m a ten-time Emmy winner.’

In April, Rivera had an epic meltdown during a screaming match with Bongino on Hannity over policing and protests in the wake of the death of Daunte Wright.