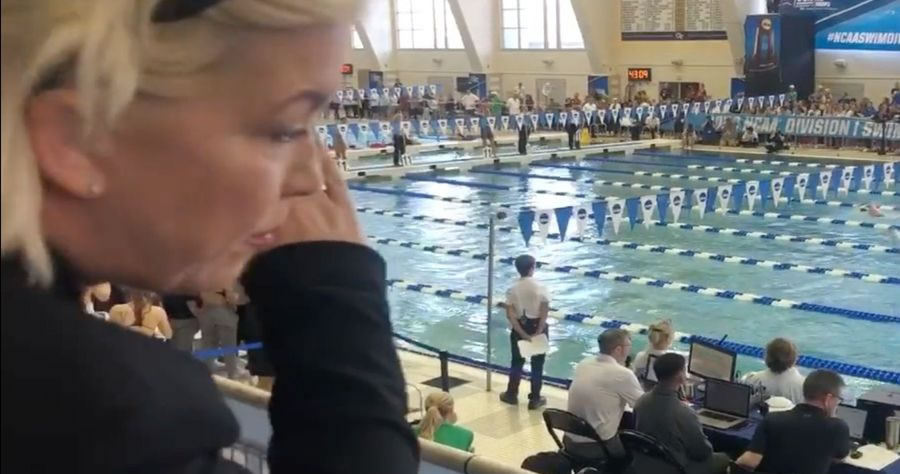 Two audience members at Thursday’s NCAA Women’s 500 Free Prelims got into a heated debate about the impact that allowing men to compete in women’s sports is having on biological females and our place in society.

University of Pennsylvania transgender swimmer Lia Thomas was competing against biological females in the NCAA Women’s Championship when the conversation between the two attendees started. In a video posted to Twitter, a British woman asked a young man wearing a face mask “So you’re saying that his body is the same as the girls in the pool?”

The masked man responded, “every body is different.”

“No, no. So, you’re saying he doesn’t have male organs?” she continued. The man in the mask said that the British woman was “twisting words” and couldn’t, or wouldn’t answer her question.

“I’m a woman; that is not a woman,” the woman continued as the man talked over her. “Do you have ovaries?” she asked, as the masked man kept repeating, “Can I ask you a question?” until the woman said, “yeah, go on then.”

“Are you a biologist?” He asked.

A clash of views as Lis Thomas races ahead at the NCAA 500 freestyle prelims. pic.twitter.com/X9J5yzmozd

“Oh my god, don’t be ridiculous. I’m not a vet, but I know what a dog is. You rely on stupid arguments because you don’t have an argument,” she responded to the man, “I’m not an astrophysicist, but I know what space is.”

“Yeah, but that doesn’t mean you know how space works. I’m happy to have a real conversation if you want one,” the masked man said with a particular degree of passive aggression.

“If you don’t think this is going to destroy women’s sports, if this is alright with you, then I’m sorry, but it’s insane. It’s absolutely insane.” The woman concluded with the type of aggression that can only be attributed to watching less than 100 years of female empowerment and equality dissipate before our very eyes, something that very few progressive men have any respect or understanding for.

University of Virginia’s biological female Emma Weyant finished second to Thomas in the 500 freestyle with a final time of 4:34:99, according to USA Today. OutKick argued that Weyant had been cheated out of her national championship by Thomas.