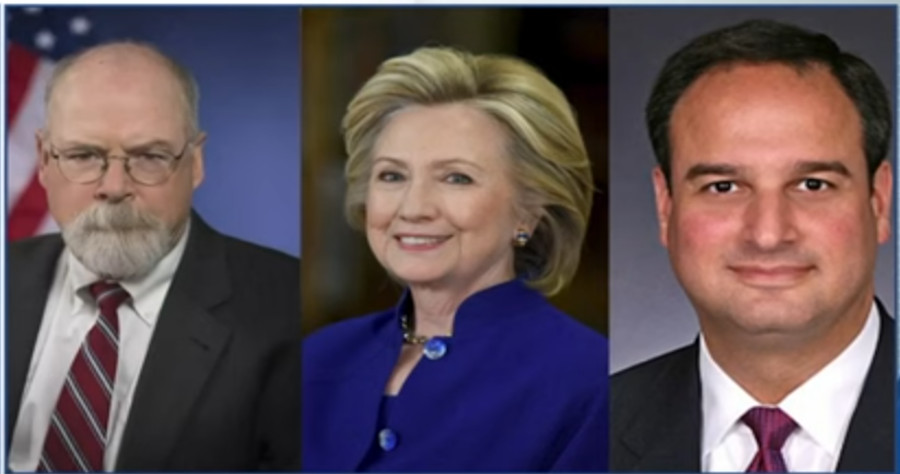 The prosecution team also said Sussman, a former federal prosecutor, tried to “manipulate” the FBI in his September 2016 talk with the agency, weeks before the 2016 presidential election, by pitching a Trump-Russia collusion narrative.

The trial proceedings in the U.S. District Court for the District of Columbia follow jury selection Monday and begin Durham’s first trial in his probe into the origins of the now-discredited collusion narrative.

Durham charged Sussmann in September 2021 with lying to the FBI when he allegedly told then-FBI general counsel James Baker that he was not working on behalf of any client while providing him with since-debunked collusion allegations.

Durham says Sussmann was working at the time on behalf of two clients, the Clinton campaign and then-Neustar tech firm executive Rodney Joffe.

Durham, appointed by Trump administration Attorney General William Barr to look into the origins of the narrative, intends to show that Sussmann told Congress the truth about working for the Clinton campaign after he lied to the FBI.

Sussmann is pleading not guilty to the charge.

If convicted, he faces up to five years in prison.

Judge Christopher Cooper, appointed to the bench by former President Barack Obama, is presiding over the trial.

The second day of the expected two-week-long trial began at 9 a.m. Eastern time.

The proceeding started with the prosecution and the defense each giving their opening statements, followed by the government calling its witnesses to testify.

U.S. Attorney Deborah Shaw gave the prosecution’s opening statement, framing Sussmann’s relationship with the FBI as one of privilege, arguing that he believed the normal rules didn’t apply to him and that he could use the bureau as a political tool and lie to them without suffering the consequences.

She also said Sussmann brought the information to the FBI not as a concerned citizen, but for his own ends and to serve the agenda of his clients.

Sussmann met with Baker, whom he knew from previously working together, giving him the information he had received from Joffe. The FBI found that the supposed connection between the Trump Organization and Alfa Bank was a spam email server sending marketing emails, not crime or threat to national security.

Shaw argued that Sussmann leaked the allegations to the New York Times, expecting the story to be run. However, when the story wasn’t published immediately, Sussmann went to the FBI with the information, claiming he wasn’t representing a client so that they would meet with him right away, as they knew he worked with the Democratic Party.

When Sussmann testified before Congress, he admitted to carrying out both meetings on behalf of Joffe. However, Shaw alleged that Sussmann hid from Congress that he had billed the Clinton campaign for his meeting with the FBI. Sussmann also worked with Fusion GPS to plant the story about Trump in the media.

Shaw argued that Sussmann’s lie to the FBI mattered as evidenced by the resources it took to investigate what ended up being a spam email server.

Witnesses that Shaw said would be brought to the stand include Baker and other FBI agents involved in the investigation, employees of Joffe’s company, an employee of Fusion GPS, employee of Sussmann’s former law firm to explain their billing records.

One of Sussmann’s lawyers, Michael Bosworth, then gave his opening statement, arguing that Sussmann wouldn’t lie to the FBI since he would have gained nothing from it and lost everything if he did.

Bosworth argued that the FBI was aware of Sussmann’s clients, both the Democratic National Committee and the Clinton campaign.

He said that Sussmann took the information given to him by Joffe to the media because he trusted his longtime client and took him seriously, wanting the American public to see it for themselves and make a decision.

Sussmann purportedly wanted to warn the FBI that the story was coming so it wouldn’t be caught by surprise.

Bosworth said that Sussmann wasn’t directed to speak with the FBI about the data Joffe gave him and that meeting with the bureau was the opposite of what the Clinton campaign would have wanted since it asked the New York Times to hold the story.

The defense argued that the prosecution has four questions to answer regarding Sussmann: What did he actually say to Baker? Is what he said false? Did he intend to say something false? Did it matter?

Bosworth added that if the Clinton campaign wanted to conceal its connection to Sussmann when he went to the FBI, he would be the worst person to send since the FBI knew they were his client.

While the FBI is now saying that Sussmann’s motivations between meeting with Baker regarding the Trump allegations, Bosworth claims that at the time, they knew who his clients were and it didn’t matter.

On Monday, the prosecution listed five witnesses they hope to call to the stand including FBI agent David Martin and top Democrat election lawyer Marc Elias.

The defense had objected to Martin’s testimony, claiming it would be used to discuss the importance of Sussmann’s allegedly false claim that he was not representing any clients when providing the FBI with since-debunked allegations about Trump and Alfa Bank.

Such testimony would thus “fall outside the bounds of what the Court ruled it would allow and instead veer into impermissible testimony,” the defense argued, according to the New York Post.

Cooper said on Tuesday that the scope of Martin’s testimony would be limited to the statistical shortcomings of DNS data, not whether the data Sussmann gave the FBI was fabricated or spoofed.

Elias and Sussmann were partners together at the law firm Perkins Coie, which represented Clinton’s 2016 presidential campaign.

Elias headed the firm’s political group and served as general counsel for the Clinton campaign. He testified during a House Intelligence Committee investigation in 2017 and recently during Durham’s investigation that he was the one who hired the opposition research firm Fusion GPS to dig up dirt on Trump.

Sussmann told the FBI that the Trump Organization had a secret communications channel with the Kremlin through Russia’s Alfa Bank. The FBI, CIA, Trump-Russia Special Counsel Robert Mueller and others have debunked the claim.

A key piece of evidence in the special counsel’s case is a text message in which Sussmann tells Baker he wasn’t representing any clients.

Durham also alleges Sussmann “repeatedly billed the Clinton campaign for his work” on the Alfa Bank allegations and that he admitted to approaching the FBI at the instruction of a client in his testimony to Congress.

Danchenko who contributed to opposition research on then-presidential candidate Donald Trump, is set for an Oct. 11 trial in Virginia.

Clinesmith pleaded guilty last year to altering an email during the Russia investigation that was used to justify the surveillance of former Trump campaign adviser Carter Page and was sentenced to one year of probation.