In State of the Union, Biden vows to help trans-identified youth reach their ‘”God”-given potential’ 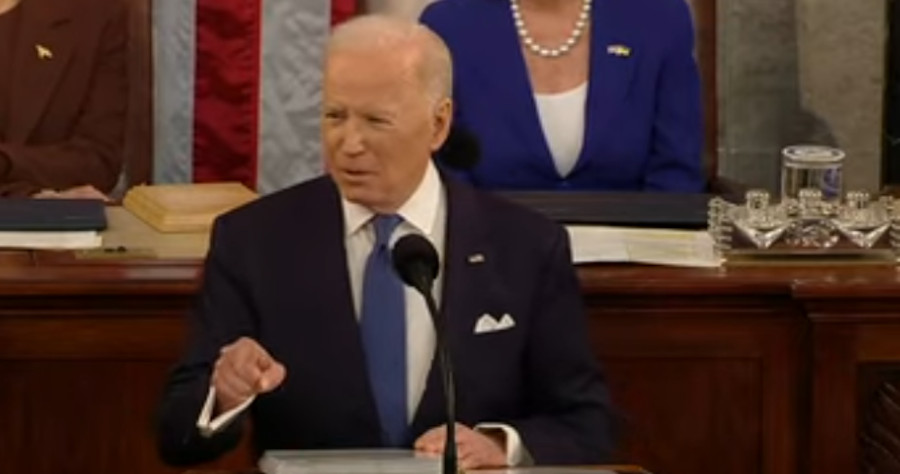 President Joe Biden’s first State of the Union address touched on many hotly-debated issues Tuesday night, both domestic and global, as he vowed to stand up to Russia as well as states that pass laws limiting abortion and who can participate in women’s sports.

Biden delivered his first State of the Union Address since taking office last year, given to a joint session of the 117th United States Congress gathered in the U.S. House Chamber, which he called a “citadel of democracy.”

The president maintained that numerous rights were “under assault” as he encouraged lawmakers to rally behind his domestic agenda.

Biden lamented that “the constitutional right affirmed by Roe v. Wade, standing precedent for half a century, is under attack as never before.”

Despite being the second Catholic to be elected president of the United States, Biden expressed disappointment with the myriad of pro-life laws passed at the state level a day after the U.S. Senate killed the Women’s Health Protection Act. The bill would have codified the legal precedent of Roe, the 1973 Supreme Court decision establishing a right to abortion nationwide, into federal law.

While he didn’t mention the bill by name, Biden implicitly called on Congress to support such legislation by proclaiming: “If you want to go forward not backwards, we must protect access to healthcare, preserve a woman’s right to choose and continue to advance maternal healthcare for all Americans.”

The 79-year-old former senator from Delaware slammed “the onslaught of state laws targeting transgender Americans and their families” as “simply wrong.”

He delivered a message to “our younger transgender Americans,” telling them “I’ll always have your back as your president so you can be yourself and reach your God-given potential.”

The laws Biden referred to include measures designed to prevent biological males who identify as females from competing in women’s sports in light of concerns that the biological differences between men and women give biological males a competitive advantage over their female counterparts. Other laws passed at the state level include bans on gender reassignment surgeries and puberty-blocking drugs for minors with gender dysphoria.

Biden also alleged that the right to vote was under attack as he encouraged Congress to pass the Freedom to Vote Act and the John Lewis Voting Rights Act.

Trying to strike a more bipartisan tone, the president stated that “we need to secure our border and fix the immigration system” to “advance liberty and justice.”

He asked Congress to “provide a pathway to citizenship for dreamers,” immigrants brought illegally to the country as children, as well as “those with temporary status, farmworkers, [and] essential workers.”

“Revise our laws so that businesses have workers they need and families don’t wait decades to reunite. It’s not only the right thing to do, it’s [the] economically smart thing to do,” he added.

The failure to pass much of Biden’s aforementioned legislative priorities stems from the narrow majorities Democrats have in Congress. While the Democrat-controlled U.S. House of Representatives has passed the Equality Act, the John Lewis Voting Rights Act and the Women’s Health Protection Act, the measures have failed to gain traction in the evenly divided U.S. Senate, where most legislation requires 60 votes for passage.

Biden used his address to promote his newly announced Supreme Court nominee, Judge Ketanji Brown Jackson of the U.S. Court of Appeals for the District of Columbia Circuit, whom he praised as a “consensus builder” and “one of our nation’s top legal minds.”

Biden pushed back on the demands by those in the more liberal wing of his party to “defund the police,” an effort that intensified following the death of African American George Floyd in police custody in May 2020.

“The answer is not to defund the police,” he said. “It’s to fund the police … fund them with resources and training … they need to protect their communities.”

Republicans in the audience stood and applauded as Biden made the remarks denouncing the “defund the police” movement while remaining more reserved as he pushed for gun control.

Biden also discussed foreign policy and economics in his address. He spent much of the introduction of his speech weighing in on the Russia-Ukraine conflict, praising the Ukrainian people’s efforts to fight back against the Russian invasion of the Eastern European country that has dominated national headlines and political discourse over the past week.

The Ukrainian Ambassador to the U.S. was in attendance at the State of the Union. Seated by First Lady Jill Biden, she received a standing ovation from the audience.

“Putin is now isolated from the world more than he has ever been,” Biden added.

The president discussed the economic sanctions the U.S. and its allies had imposed on Russia and told the American people that “we will join our allies in closing off American air space to all Russian flights, further isolating Russia and adding an additional squeeze on their economy.”

Biden contended that the economic sanctions have paid off because “the ruble has already lost 30% of its value” and “the Russian stock market has lost 40% of its value.”

While the president vowed to continue “providing support for Ukrainians and their fight for freedom,” he indicated that “our forces are not engaged and will not engage in a conflict with Russian forces in Ukraine.” However, he noted that U.S. troops were heading to Europe to defend NATO allies in eastern Europe. He vowed the U.S. and its allies will defend “every inch” of territory controlled by NATO countries.

Biden acknowledged that “a Russian dictator … invading a foreign country has costs around the world” but insisted that he was taking robust action to ensure that “the pain of our sanctions is targeted at [the] Russian economy and that we use every tool at our disposal to protect American businesses and consumers.”

Additionally, he reported that the U.S. has partnered with 30 other countries to release “16 million barrels of oil from reserves around the world,” adding that “America will lead that effort.”

“I know news about what’s happening can seem alarming to all Americans but I want you to know we’re going to be OK,” Biden stated. He predicted that the war in Ukraine would weaken Russia while making the U.S. and its allies stronger.

Transitioning to domestic policy, the president discussed the impact of the coronavirus pandemic and inflation, specifically how “so many families are living paycheck to paycheck struggling to keep up with the rising cost of food, gas, housing and so much more.”

He praised the American Rescue Plan, a coronavirus stimulus measure approved by Congress on a party-line vote, which critics contend led to the inflation plaguing the U.S. because of its high price tag.

“I’m more optimistic about America today than I’ve been my whole life because I see the future that’s within our grasp, because I know there’s simply nothing beyond our … capacity,” he concluded. “On our 245th year as a nation, I’ve come to report on the state of the nation, the state of the union. And my report is this: The State of the Union is strong because you, the American people, are strong.”