In The Hot Seat! Liz Cheney Not Impressed With Threat Of Jail By Newt Gingrich [VIDEO] 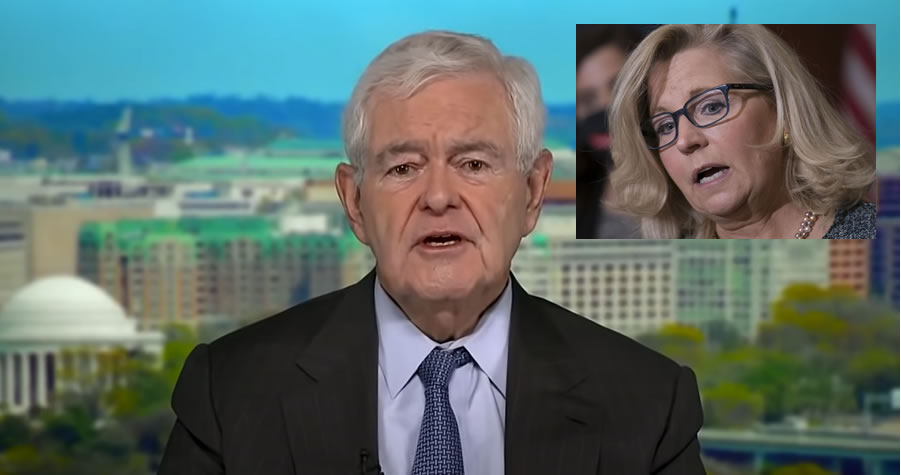 The idea that a day of reckoning could be on the horizon for the members of the Democrats’ select committee to investigate the events of January 6, 2021 isn’t sitting well with the two Republicans who were hand picked by Nancy Pelosi to put a false face of bipartisanship on what has been a politically motivated witch hunt.
Suggesting that the fortunes of Democrats on Madam Speaker’s sham committee will dramatically shift if the electoral bloodbath that is anticipated in the midterm elections occurs and flips control of Congress to Republicans was Newt Gingrich, a man who once held Pelosi’s job and who knows a thing or two about hardball politics.

Gingrich appeared on Fox News’ “Sunday Morning Futures” where he discussed a column that he penned entitled “The Wolves Will Become Sheep” in which he laid out a blueprint for House Minority Leader Kevin McCarthy to set the stage for reigning in the power hungry Democrats in a fiery call to action that invoked the likes of Fidel and Raul Castro, Hugo Chavez and Joseph Stalin for historical context.

In his op-ed, Gingrich decried the “increasingly vicious and destructive actions of the House Democrats” and wrote that the “2022 midterm election will turn the Democratic wolves into sheep—and the power to shear the sheep will be handed over to House Republicans” who he urged to act in order to restore the “core principles of American self-government.”

Gingrich took it a step further during his conversation with Fox’s Maria Bartiromo, suggesting that when the tables are turned, that committee members could even face the prospect of jail time.

According to Newt, “You’re going to have a Republican majority in the House and a Republican majority in the Senate and all these people who’ve been so tough and so mean and so nasty are going to be delivered subpoenas for every document, every conversation, every tweet, every email, because I think it’s clear these are people who are literally just running over the law, pursuing innocent people, causing them to spend thousands and thousands of dollars in legal fees for no justification and its basically a lynch mob and unfortunately the attorney general of the United States has joined that lynch mob and is totally misusing the FBI,”

“And I think when you have a Republican Congress, this is all going to come crashing down,” he added. “And the wolves are going to find out that they’re now sheep and they’re the ones who are in fact, I think, face a real risk of jail for the kinds of laws they’re breaking.”

A former Speaker of the House is threatening jail time for members of Congress who are investigating the violent January 6 attack on our Capitol and our Constitution.

This is what it looks like when the rule of law unravels. https://t.co/vpQZjTg9em

Her fellow collaborator and house crybaby Rep. Adam Kinzinger whose burning hatred of Trump led to the spectacular self-immolation of his own political career mockingly tweeted out a movie clip in response to Gingrich.

Of course, Eric ‘Fang Fang’ Swalwell had to offer his 2 cents,

Desperate to be relevant, Newt extends his perpetual lying to making a threat of outright fascism, all in service of insurrectionists. https://t.co/QIulYkXWDQ

Not everyone agreed with this trio,

Newt Gingrich is trending on @Twitter because the Pelosi rump January 6 committee is abusing citizens, lawless, and compromised.

Liz Cheney is now on the hot seat for the treason she’s been committing in the Jan 6 committee participation in the Democrats coup of a sitting President, Newt Gingrich has mentioned possible jail time for her. She deserves hard prison time

What you all doing is illegal and deserve jail

Well if you broke any laws…I’d like to see you in jail. Fauci should be investigated and if need be put on trial as well.