Is Joe Biden The New Face Of American Racism? 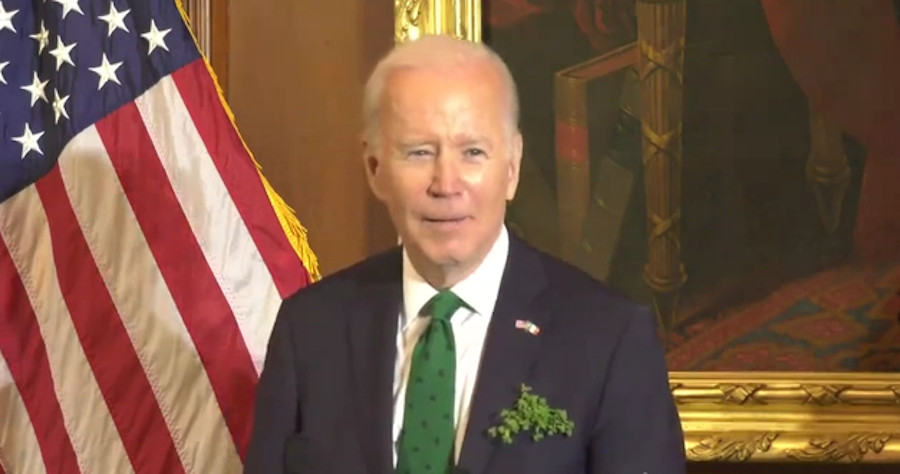 Racism, biases, and hate have been a part of the human condition long before America ever came on history’s horizon, and it will continue on into the future for so long as parents teach their children to hate for reasons that should carry no hate, such as the color of one’s skin.

The mass shooting that ended the lives of ten innocent people on May 14th, 2022 was a sickening, evil thing to see, and it’s practically an unfathomable thing, as we are all left wondering just how in the world and here in the 21st century could anyone see the color of a person’s skin as any sort of justification for murdering them in cold blood with such malice and hate aforethought.

“I hate white people. All of them. Every last iota of a cracker. … What the hell is wrong with you black man? You at a doomsday with a white girl on your damn arm. We keep begging white people for freedom! No wonder we are not free! Your enemy cannot make you free, fool! You want freedom? You going to have to kill some crackers! You going to have to kill some of their babies!”  ~  Malik Shabazz, former Chairman for the New Black Panther Party, April 2002

Sadly, on May 17th, 2022, Joe Biden, America’s teleprompter-reader-in-chief, saw fit to perpetuate the myth that a systemically racist America still exists and “white supremacy” is running rampant everywhere, and regardless of the fact this probably served his regime to deflect from its numerous failures, such as the economy and the baby formula shortage, it is unconscionable that he would throw gasoline on the racist fires to make them worse. E

Essentially, he has abandoned the notion that all men are created equal, regardless of color, in favor of racial essentialism, privilege for people of color, and a diseased, racist ideology that demonizes white people, placing a target on the backs of over 200 million white people.

Always the divider and never one to unite the country, Biden told the gathered crowd:

“White supremacy is a poison. It’s a poison … running through our body politic. It’s been allowed to fester and grow right in front of our eyes.”

Where was Biden’s sense of outrage and condemnation after Frank James, a black supremacist, wounded twenty-nine people in the New York subway on April 12th, 2022? What about Darrel Brooks, the black radical who regularly called for violence against white people and killed six and injured sixty others in Waukesha, Wisconsin by plowing his vehicle into a crowd?

America didn’t see Biden empathizing with the victims of the subway attack, or the one in Waukesha. He sure didn’t rush to put on a big show of anger over black supremacy and the murders regularly perpetrated by its adherents, like Micah Johnson who shot and killed five Dallas police officers in 2016, wounding seven others, after making numerous statements about wanting to kill white people.

No, Biden just kept on running with his own divisive hate-filled message, as he suggested white supremacy was the only hate-filled ideology doing harm to America, stating:

“Now is the time for the people of all races from every background to speak up as the majority in America that rejects white supremacy. These actions we’ve seen in these hate-filled attacks represent the views of a hateful minority. We can’t allow them to destroy America, the real America.”

Biden’s words would have had an air of honesty if he had simply said that Americans of all races must reject any supremacist movement, whether it comes from the KKK, New Black Panthers, LaRaza, Aryan Brotherhood, Nation of Islam, or the Black Hebrew Israelites, and stop all enemies of America from destroying Her. But he is too intellectually dishonest and corrupt to identify the real problems, since just like all the other aforementioned radicals and extremists, Joe Biden and his ilk really want to destroy America too.

One should shiver at the thought of what Biden may consider to be “the real America”.

And, with the bodies of Aaron Salter, a retired police officer, who tried to stop the shooter, and Roberta Drury, Margus Morrison, Andre Mackneil, Geraldine Talley, Celestine Chaney, Heyward Patterson, Katherine Massey, Pearl Young, and Ruth Whitfield barely cold and yet to be buried, Biden couldn’t contain himself, nor could he resist using this terrible and horrific tragedy for ten families as a renewed justification for returning to the issue of firearm controls, as he stated:

“We can keep assault weapons off our streets. We’ve done it before.”

Not to be outdone, on May 16th, 2022, Byron Brown, the Mayor of Buffalo, basically suggested that this sort of racism was “prevalent” in America. He reiterated it today, May 17th, as he told the cameras, “If we’re honest, this sort of white supremacy is supported across the country.”

If anything, the exact opposite is true and the most prevalent form of racist motivated violence being directed at white America, the established institutions, and traditional America by the black activists coordinating with the various Communist parties across the globe, including in China.

Look at black fascists in America, who advance the Marxist/Maoist party line, and much could be said about their propensity for violence against white America. Just like the fringe on the right, these violent, far-left radical, black extremists and racists, who have razed entire cities across America over the past several years, are a poison America has witnessed spreading, festering, and growing throughout our land, since at least 2008, because it is enabled and supported by the likes of Barack Obama, Hillary Clinton, and Joe Biden and his apparatchiks and minions in the Democratic Communist Party.

If a white man says “boo” to anyone of color nowadays, it’s treated as an act of “white supremacy”, even though it is factually true that those professed white supremacists, who shot multiple people due to their own political beliefs, were mentally unbalanced for some time, very similar to this recent shooter in Buffalo. And the number of shootings over the past decade attributed to actual white supremacists is so few that it can be stated unequivocally that the statistics just don’t support a rise in any massive white supremacist movement in America.

Considered to be mainstream Democratic reasoning and far from mentally ill in the here and now, many of today’s black extremists, activists, and academics alike, say it out loud without a blink of an eye or a bit of conscience, that they seek a world without white people.

Highlighted by Lawrence Richard, he notes an activist at the National Black Power Convention in Oklahoma issued a warning last year that a time was coming when black people across the country will “kill everything white in sight”.

White supremacy and black supremacy are two sides of the same coin, both steeped in racial hatred of other races. Two wrongs don’t make a right.

Although all Americans recognize there are still racists in this nation, the honest citizens know they are found in all the races, no matter which one cares to mention. They also understand that the greatest percentage of Americans reject racism, Critical Race Theory, and the identity politics it has birthed, as one keeps supporting the other.

However, over the past sixty years or so, America has made so much progress in race relations, as we have seen the youth of all races easily and comfortably attend grade schools, high schools, and colleges together — yes, with a few missteps here and there, and enter the military and the civilian workforces to work, more often than not, quite well alongside one another, even attending religious services together, along with all the other everyday stuff that one might enjoy in the life of a simple American.

It’s not just white people who think of themselves as Americans first, and work towards their own success, as they dream of living life better than well and fine, educating their children and giving them the best experiences life has to offer and doing it all without having to be troubled by how one’s skin color might affect it all.

Joe Biden, a racist extraordinaire, is America’s poster child for the new face of racism in America, never having seen a racist cause he couldn’t support during his lifetime, whether it was supporting Senator Robert Byrd, an Exalted Cyclops of the Ku Klux Klan, or today supporting the black extremists, nationalists, and segregationists of the Black Lives Matter, the New Black Panthers, and Laraza. He can support any racist cause, just as long as he can use it to grow a political base and power and generate billions of dollars that will soon line his pockets.

In June of 2021, Leo Terrell, a black man, and a civil rights attorney told Fox News:

“Somebody needs to tell Joe Biden he’s a racist.”

Biden’s speech was simply one more in a long line of semi-coherent diatribes against a threat that he and his regime have manufactured, as he blamed Republicans and Fox News and bloviated on all he intended to do to prevent other such attacks. He basically has suggested that millions of conservative Americans, who oppose his policies or support Donald Trump for president, are “white supremacists” and potential terrorists, and he has used the blood of the innocents who died in Buffalo, for his own political gain and gratification, rather than giving any true comfort to those left behind, the heartbroken loved ones.

How dare this God damned son-of-a-bitch lecture America on love and hate and the Scripture, when every policy he pursues attacks the Church, the family, and the very Christian principles that founded America.  There is also such a thing as righteous anger, and although the Scriptures command us to love one another, God also commands us to hate — yes, hate — evil in all things. And for those of us who recognize evil when we see it, there hasn’t been a man any more evil than Joe Biden sitting in the White House in all of America’s history, as he puts on a huge pretense of loving America.

Like love, hate belongs to human nature, to Life, and it cannot be forbidden by any article of some penal code or banal words or an executive order from a Biden. It may be judged adverse or condemned but through the prism of one’s own moral code. I have the right to love or hate whoever I wish, just like anyone else, and so yes, I hate the Democrats, by and large, Obama, Hillary, Biden, Kamala, and all the other bastards who have allowed amerikkan red radical extremists to burn our cities and maim and murder decent, good and innocent Americans and then pay their bail, or see to their release from jail without any bail.

I absolutely do hate those who accept money from George Soros and those like Nancy Pelosi, Adam Schiff, Chuck Schumer, Adam Kizinger and Liz Cheney, their accomplices and domestic terrorist allies and traitors found in BLM and Antifa, for their plots and efforts to sell America to the enemy and destroy everything good and decent about America in the process. I do hate them as I have always hated any murderer of freedom and liberty in my country, this America I love so well, as is my sacrosanct right, my sacrosanct duty.

I hate these traitors to America, not due to the color of their skin but due to their ideology that seeks to destroy America and enslave and impoverish all Free Born Americans. Hating Biden and his group of traitors is an act of love for America, and their ultimate defeat will be a win for liberty and a win for all of America.