Jill Biden Brags at Hollywood Fundraiser: After Trump, People Come to Me Saying ‘I Feel Like I Can Breathe 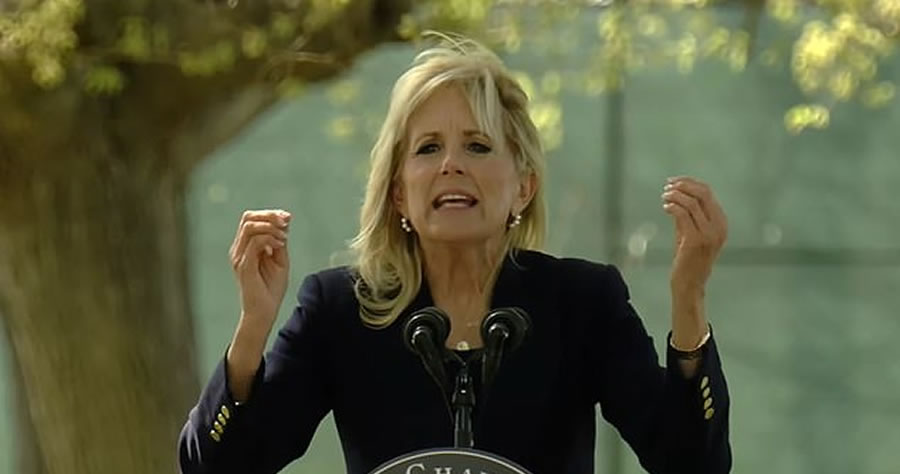 First Lady Jill Biden reportedly trashed former President Donald Trump at a glitzy Hollywood fundraiser on Friday, bragging that since Trump left office, people have come up to her saying “I feel like I can breathe.”

The Bidens attended a Los Angeles fundraiser thrown by Democratic mega-donor Haim Saban and his wife, Cheryl. The event was intended to raise money for Democratic National Committee’s Democratic Grassroots Victory Fund, with tickets starting at $1,000 per person and going as high as a whopping $36,500.

In her address to the donors assembled on Friday evening, Jill Biden brought up the January 6 riot at the Capitol in order to take a swipe at Trump, according to multiple reports.

“If you think of what went on January 6, and if we were living with that kind of president today — it’s like you can’t even let your head go there,” she reportedly said. “And then once we were elected, people came up to me all the time, everywhere I went, and said, ‘Jill, I feel like I can breathe.’”

“Thank god we won, because if you think of what went on on January 6, and if you think, ‘What if we were living with that president today?’

People keep coming up to me now and saying ‘I feel like I can breathe.’”

.@FLOTUS Jill Biden brought up January 6 when at an LA fundraiser tonight: "And I thank God we did win because if you think of what went on January 6, if we were living with that kind of president today, it's like you can't even let your head go there."

The same day, the Bidens attended another fundraiser in Brentwood hosted by Andrew Hauptman and Ellen Bronfman Hauptman, and co-hosted by former Disney and Dreamworks boss Jeffrey Katzenberg.

Biden’s hobnobbing with Hollywood elite comes as inflation hit a new high in May with prices soaring a stunning 8.6 percent, defying the prevailing media narrative that inflation had cooled off a bit.