Joe Manchin sits with Republicans during State of the Union 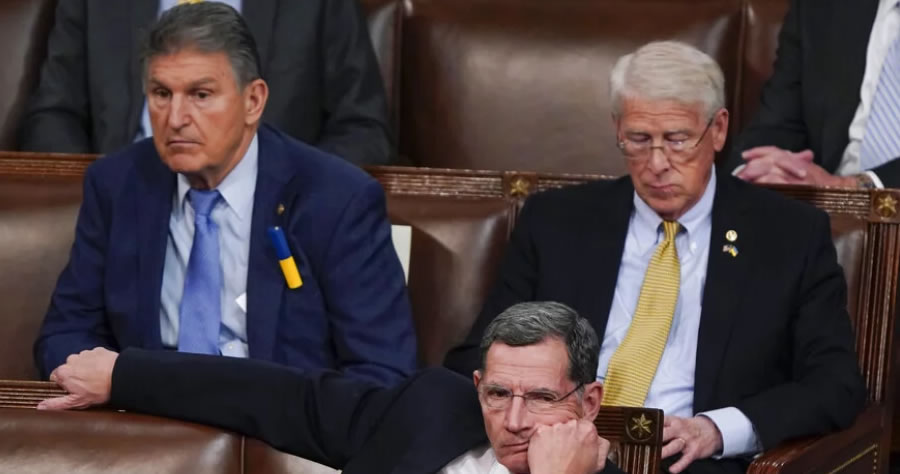 Democratic Sen. Joe Manchin opted to sit with Republican members during Tuesday’s State of the Union rather than his Democratic colleagues.

The West Virginia senator instead sat between GOP Mississippi Sen. Roger Wicker and Utah Republican Sen. Mitt Romney, directly behind Iowa Sen. Joni Ernst.
As Biden gave his address, Manchin remained seated and refrained from clapping as others applauded the president for lauding items within his Build Back Better bill, including the expanded Child Tax Credit that expired in December, which Manchin opposed.

During parts of the address, Manchin was spotted leaning over to speak to Romney on several occasions.

As President Joe Biden delivers his first State of the Union address to a joint session of Congress at the Capitol, Sen. Joe Manchin, stands and applauds while seated among Republican Senators and Rep. Marjorie Taylor Greene voices opposition pic.twitter.com/Azz7mzAtas

VIDEO: @SenatorRomney says he asked @Sen_JoeManchin to sit next to him at SOTU

Manchin, who sat with GOP Senators during the President’s speech says he was: “showing unity, working together. showing the whole world we're together in standing behind Ukraine” pic.twitter.com/URL3sJ2nBV

Following the address, Romney told reporters he “asked” Manchin to sit with him. Manchin chimed in, we’re “showing unity, working together. Showing the whole world we’re together in standing behind Ukraine.”

“Sen. Manchin sat with his colleague Sen. Romney to remind the American people and the world that bipartisanship works and is alive and well in the U.S. Senate,” said Sam Runyon, communications director for the West Virginia Democrat.