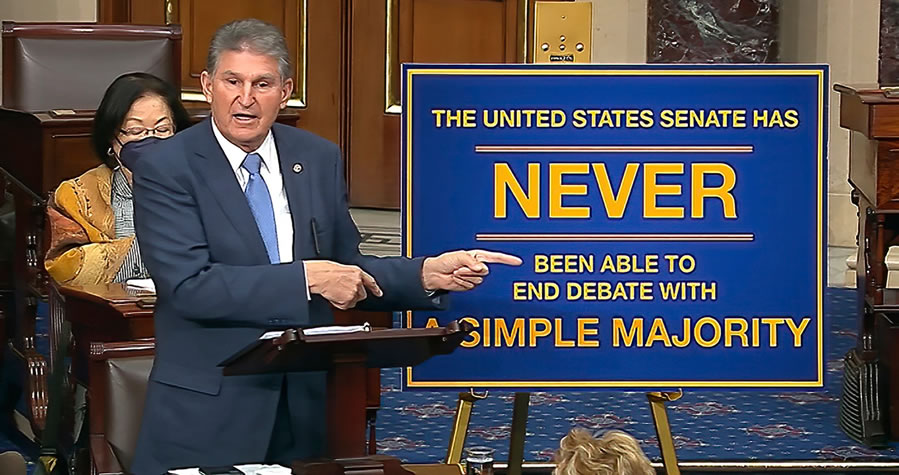 Moderate Democratic Sen. Joe Manchin slammed his colleagues’ effort to alter or eliminate the filibuster in an attempt to pass sweeping election reform Wednesday, just hours before the Senate put the rule change to a vote.

“For the last year, my Democratic colleagues have taken to the Senate floor, cable news airwaves, pages of newspapers across the country to argue that repealing the filibuster is actually restoring the Senate to the vision of the Founding Fathers intended for this deliberative body,” Manchin (D-WV) said on the Senate floor. “My friends, that is simply not true.

“It’s just not true. The United States Senate has never, in 233 years, been able to end debate on legislation with a simple majority vote.”

Manchin vowed to support the election legislation in the upcoming cloture vote, but slammed his fellow Democrats who supported using the so-called “nuclear option” to ensure the measure passes, saying they are looking to “break the rules.”

He pushed for compromise, pointing to a recent deal between Senate Majority Leader Chuck Schumer (D-NY) and Minority Leader Mitch McConnell (R-Ky.) to pass the debt ceiling at the end of last year.

“[You] didn’t break the rules to do that. You didn’t. You worked it out, which is the leadership’s responsibility,” he said.

“Allowing one party to exert complete control in the Senate with only a simple majority will only pour fuel on the fire of political whiplash and dysfunction that is tearing this nation apart, and you don’t have to look very far to see how we’re tearing ourselves apart,” said Manchin, who added that if the Democrats’ gambit succeeded, “there’s not going to be any check on the executive branch.”