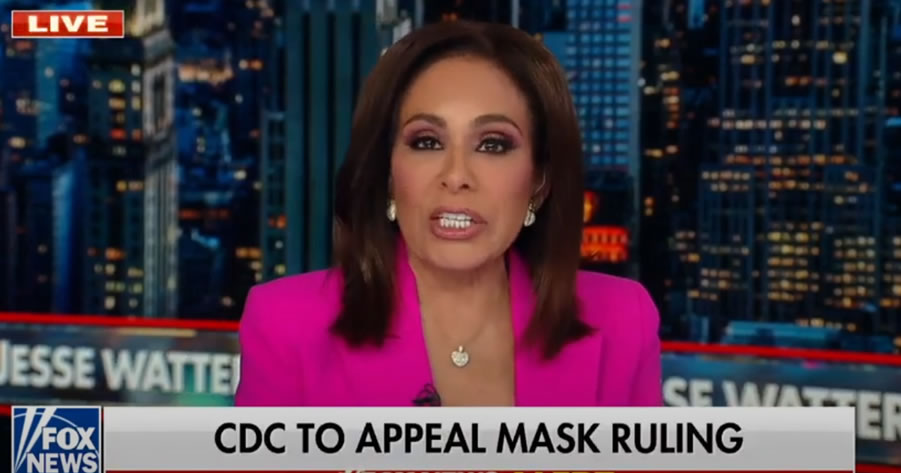 mericans who cheered the landmark ruling by a Florida federal judge that ended the Biden administration’s transportation mask mandate soon discovered that the Centers for Disease Control and Prevention (CDC) asked for an appeal in a brazen effort to reimpose the forced masking, a move that drew harsh criticism from many including Fox News’s Judge Jeanine Pirro.

On Wednesday, the agency which has exploited the COVID pandemic as the pretense for a massive power grab that has effectively allowed it to supersede the elected government and dispose of the U.S. Constitution announced that it would be fighting the decision by U.S. District Judge Kathryn Kimball Mizelle that it exceeded its authority with the mandate that required travelers to wear the stifling facial coverings under the threat of severe penalty.

Judge Jeanine dropped the hammer on the CDC during Wednesday’s edition of “Jesse Watters Primetime” where she was filing in for the popular host and broke down the out-of-control agency’s request that Biden’s politicized Department of Justice pursue a legal challenge against Judge Mizelle’s ruling.

“According to reports, the CDC is urging the Department of Justice to appeal a Florida judge’s ruling to invalidate the federal mask mandate for public transportation,” Pirro said. “This appeal is a brazen attempt by a deeply politicized and corrupt CDC to wrench freedom and personal choice away from Americans. They say masks on planes and trains are necessary for public health due to COVID.”

In its statement advising that it would be fighting to retain its control over American freedoms, the CDC wrote that it was appealing in order to “protect” its authority “beyond the ongoing assessment,” a flashing warning sign that it plans to use its extra-constitutional powers in the future.

“It is CDC’s continuing assessment that at this time an order requiring masking in the indoor transportation corridor remains necessary for the public health,” the agency said in its press release. 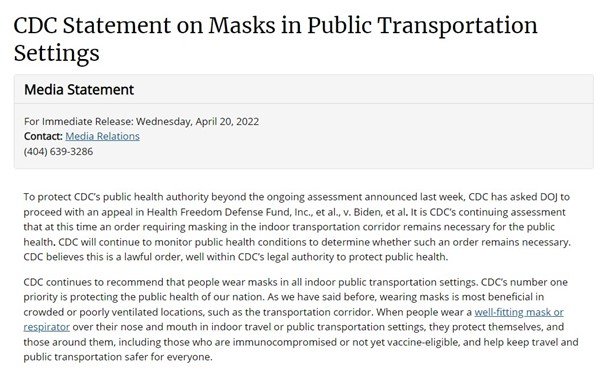