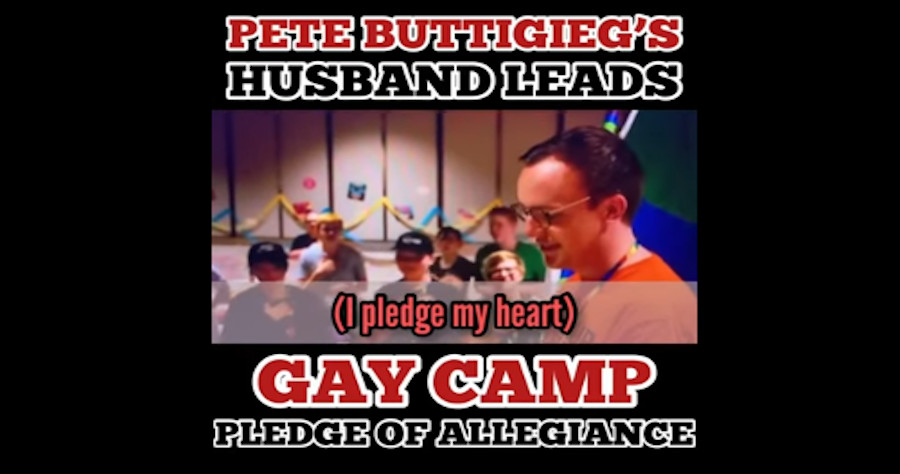 When evaluating candidates for the week’s top knucklehead, or in assessing any political issues, we generally try to avoid focusing on family members of a public figure. Consider that despite her best efforts, First Lady Jill Biden has never made it to the top spot. It’s also worth noting that most spouses of elected officials tend to keep a low profile. Can you remember the last time you had an opinion on Nancy Pelosi’s husband or Secretary of State Antony Blinken’s wife? But with Transportation Secretary Pete Buttigieg’s husband Chasten, his actions this week were too much to ignore.

Winner: Chasten Buttigieg leads children in a pledge of allegiance to the Pride Flag.

For the first time in the history of Knucklehead of the Week, we have a married couple who can both lay claim to having received this dreaded honor. In October, “Mayor Pete” Buttigieg was recognized after we learned that he’d been on paternity leave for two months at a critical point in the ongoing supply chain crisis to help with the two newborns that he and Chasten adopted. And now we have Pete’s hubby Chasten taking gay pride to a whole new level.

If we look back at some of Chasten Buttigieg’s other newsworthy incidents, we could argue that earning this week’s distinction was a long time coming. Let’s consider some of Chasten’s other notable episodes:

– While Pete was still a candidate vying for the Democratic nomination for president prior to the 2020 election, husband Chasten played along with Pete’s narrative that Chasten had been the victim of a bigoted upbringing. This claim was thoroughly and credibly debunked by Chasten’s own brother who reasonably surmised that Pete’s assertions were made for political gain.

– In December, Chasten took to social media to whine about the Biden Administration’s decision to restart the collections of federal student loans. Apparently Chasten, like any self-respecting leftist, believes that taxpayers, or schools, or someone/anyone else should pay for his debts, regardless of the fact that he willingly signed up for the terms.

– And, of course, we have the aforementioned case of husband Pete’s paternity leave farce. It’s not Chasten’s fault, you say? Think about it: if your spouse wanted to take off from work for two months (not two days, not two weeks… two freaking months) to sit on their ass and help you change diapers while his job responsibilities were in a freefall, wouldn’t you feel compelled to tell them to go back to work? And wouldn’t you have some culpability?

But finally, Chasten’s knuckleheadedness this week just could not be overlooked. On Wednesday, video emerged of Chasten leading a camp of gay teenagers in a faux pledge of allegiance, with the object of their loyalty being the Pride Flag. Here’s the video:

First and foremost, we should note that any patriotic American should consider the real Pledge of Allegiance as sacrosanct, and Chasten’s mockery of it is downright offensive. But we must also consider the overriding concept. He’s leading kids in pledging to a lifestyle. “I pledge my heart to the rainbow of the Not So Typical Gay Camp. One camp, full of pride, indivisible…”

Was he just trying to make it fun for kids? Did he mean well? Perhaps, but it was idiotic, nonetheless. There’s nothing wrong with trying to instill self-esteem in kids, but there are certainly more constructive ways of doing it, particularly when your spouse is a member of the President’s Cabinet.

Finally, we should also weigh Chasten’s mindset, which is consistent with many others in the LGBTQ community; this whole idea of ‘pride’ in being gay. If you’re heterosexual, can you say that you’re really proud of it? Or would you say you’re indifferent? Or are you proud of your gender, or skin tone, or eye color? So, should it be any different for non-heterosexuals, or non-blue-eyed folks, or whatever?

Here’s an idea for Chasten, Pete, and anyone else who thinks Gay Pride pledges and broadcasting one’s sexual proclivities – regardless of what they may be – is a good idea. A little less pride, a little less in-your-face celebration, and a little more common sense would go a long way towards mending some of the divisions in this country.