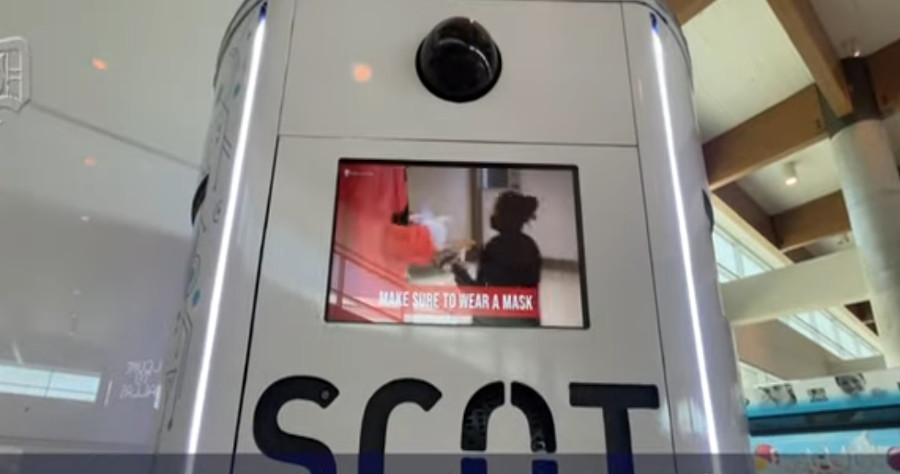 That headline is not a joke, as you’ll see when we dive into more detail. And while it’s not unusual for us to have more than one individual honored as the week’s top knucklehead, we are faced with an unprecedented dilemma this week:

Do we recognize the queer robots themselves, or the morons who decided they would be a good idea, or the robots’ programmers? Our KOTW Committee is doubtful that these robots have any significant level of artificial intelligence, so we’re going to leave them out of it for now.

Therefore, this week’s honorees are any humans that had anything to do with making this nonsense a reality.

Winner: Passengers at Dallas airport are being monitored for mask-wearing by gay robots… seriously.

There are really two absurdities to this story. First is the idea of the need to have anyone, or anything, calling out folks who are walking through an airport without a useless mask on their face. The other absurdity is more subjective but no less undeniable, and that is the apparent homosexuality of the robots. And before anyone starts typing up an email to accuse us of hate speech, watch this video and decide for yourself.

Does that not sound like a gay robot to you? It’s like having Liberace declaring, “Welcome to Dallas…” Are we applying a stereotype in making that assumption? You’re damned right we are, and we’re also applying common sense. In today’s hypersensitive and craving-for-victimhood culture, making such observations is verboten, but too bad.

For the record, what two consenting robots do on their own time and in the privacy of their own, um… laboratories, perhaps?… is their own business. We’re not judging these robots. Live and let operate, that’s our motto. But since we’re all still getting accustomed to robots interacting with us, couldn’t we hold off on having them come out of the closet for a little while longer?

As for those who like to use the word ‘homophobia,’ that term may be somewhat accurate in this case. That term is typically used to describe someone who dislikes homosexuals, but the word ‘phobia’ implies a fear, not a dislike. But these robots are kind of scary. They are using technology to recognize those who aren’t wearing masks, as required in the name of COVID. Once the robots identify you, they proclaim a warning if necessary, and they can even call airport security on you. Yup, those are some frightening gay robots.

The robots are just in the testing phase for now and are named Security Control Observation Towers (SCOT). And the technology is clearly impressive. Face-recognition abilities are becoming quite advanced, but there must be a better way for us to apply such tools. The whole idea – even if the robots’ voices sounded like John Wayne instead of Richard Simmons – is somewhat disturbing. And Orwellian. Do we really need robots to make sure we’re wearing masks?

Which leads to the wisdom of the whole mask mandate idea. While wearing N95 masks can help prevent the spread of viruses like COVID, very few people are wearing that type of mask, and even most on the left will acknowledge that cloth masks are nothing more than a fashion statement at this point. So, what’s the point?

No matter how you look at this idea, it was a bad one. And for the folks who made it come to life, so to speak, you’re all knuckleheads.