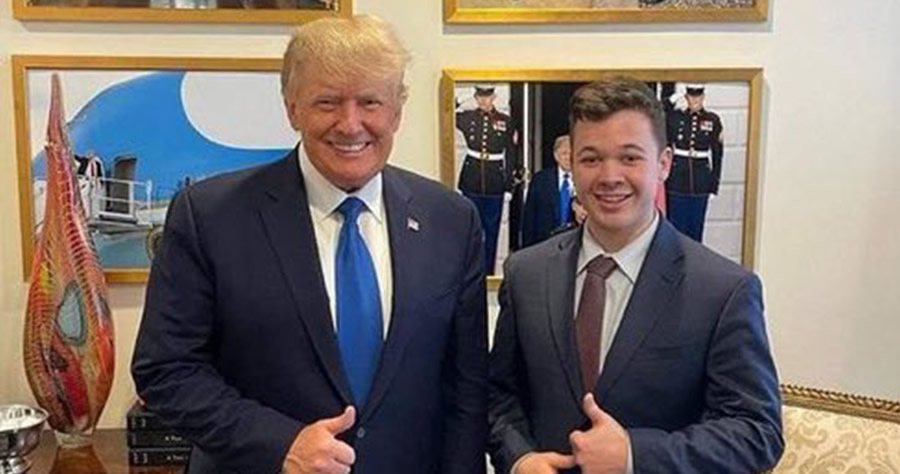 Kyle Rittenhouse met with Donald Trump at the former president’s Mar-a-Lago club after the teen was acquitted of all charges in his homicide trial last week.

The meeting between the two was disclosed during Trump’s hour-long interview with Fox News’ Sean Hannity on Tuesday night.

“Kyle I got to know him a little bit. He called. He wanted to know if he could come over and say hello because he was a fan unlike the other guy,” the former president told Hannity.

Trump said Rittenhouse visited with his mother and the two left the former president’s Florida resort “a little while ago.”

A jury last Friday cleared Rittenhouse of charges of homicide, attempted homicide and reckless endangerment after he fatally shot two men and wounded a third in Kenosha, Wisconsin in August 2020.

TRUMP: Kyle Rittenhouse “just left Mar-a-Lago a little while ago.”

Former President Donald Trump said he had met with Kyle Rittenhouse, calling the teen who was recently found not guilty of homicide, attempted homicide and other charges related to the fatal shootings in Kenosha last summer, “really a nice young man.” https://t.co/j64IorJpIJ

Kyle Rittenhouse met Donald Trump at Mar a Lago today, per ⁦@seanhannity⁩ who has the exclusive photo pic.twitter.com/SFG9M1kJ3a

An underaged kid illegally takes an assault rifle across state lines, kills two people, injures another, then is welcomed with open arms at Mar-a-Lago by the leader of the Republican Party, a mentally ill Racist. This is where we are. God help US.

hey his lawyer will be looking for libelous tweets
stay tuned meathead https://t.co/QDskK6IZtG

BREAKING: Trump reveals on Hannity that Kenosha Killer Kyle Rittenhouse — who brutally slew two men and injured a third with an AR-15 before getting acquitted — visited him at Mar-a-Lago today. RT IF YOU THINK BOTH OF THEM BELONG IN PRISON! pic.twitter.com/nZOzVa37CL

Back in the day, people who had achieved great things would visit the President at the White House.

But now, in the upside down, MAGA maniacs worship a murderer, who makes a pilgrimage to Mar-A-Lago to visit the twice-impeached riot inciter with Kim Jong-Un on his wall.