Laura Ingraham laughs at 1996 clip of Chris Rock insulting her: ‘Ma’am, you are the meanest b*tch I ever–’ 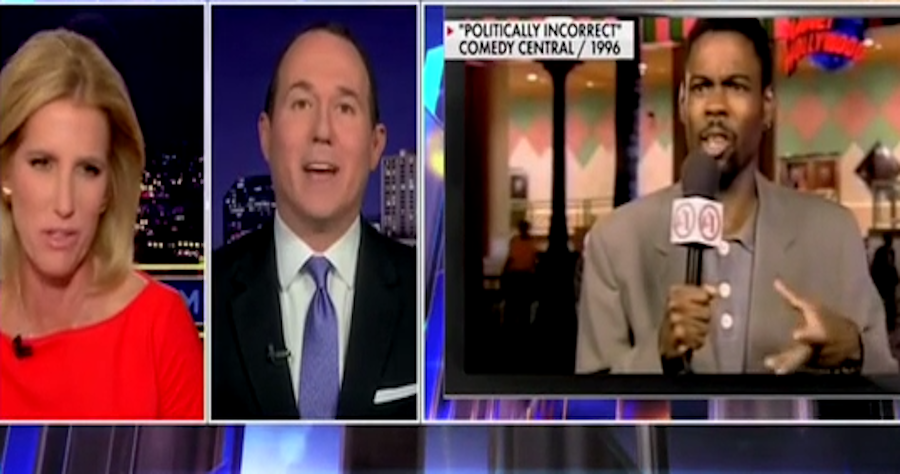 Fox News host Laura Ingraham was in the middle of a segment on actor Will Smith slapping Chris Rock Sunday night at the Academy Awards for joking about his wife, Jada Pinkett Smith, when guest Raymond Arroyo appeared to surprise her with a clip from 1996 of Rock letting loose on her.

After calmly standing up and walking up to Rock on live television and smacking him in the face, Smith returned to his seat before screaming twice, “Keep my wife’s name out of your f*cking mouth!” Minutes after the violent display, Smith was announced as the winner of Best Actor for his role in “King Richard” in which he portrayed Venus and Serena Williams’ father, and the room gave him a standing ovation.

“Giving him a standing ovation, Laura, after that assault is really everything that’s wrong with us as a people,” Arroyo said. “And I have to say it was shocking to watch that reaction. But Laura, I guess you now have grounds for a smackdown too. We found this clip from the 1990s.”

“What’s the lady, Laura Ingham?” Rock asked in the clip, mangling Ingraham’s last name. “With all due respect, ma’am, you are the meanest b*tch I ever–”

A very young Ingraham, who was on the set, could then be seen applauding while laughing.

“And no violent reaction,” Arroyo pointed out about Ingraham.

“Look at my hair,” she replied. “Most importantly, look at my outfit. That was tragic. Oh my God. Forget what he said. That is shocking to see that after all these years.”

Arroyo said he was glad Will Smith never went to a Don Rickles show, noting that the late comedian once “insulted my pregnant wife and she took it, we laughed and had a great time.”

“Comedy is dead. Comedy is dead,” Ingraham concluded. “Hollywood for the most part is dead. Raymond, I’m so upset I fell asleep before the smackdown. Thank you. And while the Hollywood elites keep the Fresh Prince on his pedestal, his friends in the media are actually turning on him for perpetuating a long-held stereotype about black men.”