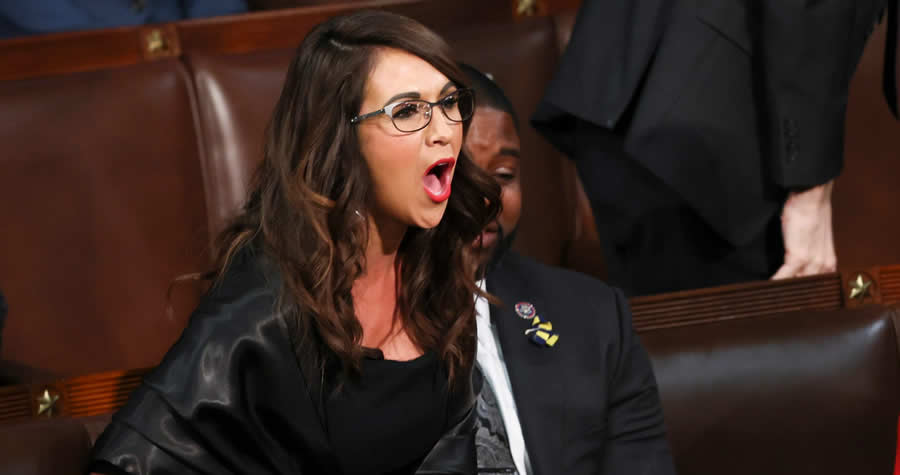 Following the release of Dinesh D’Souza’s new documentary on the 2020 election, Rep. Lauren Boebert called for an investigation into its claims.
Dinesh D’Souza’s new documentary about the 2020 election, “2000 Mules,” premiered this month, and was praised by many in the America First crowd and beyond.
The film caught the attention of elected officials, including Rep. Lauren Boebert of Colorado, who said she would call for an investigation into the claims it set forth if Republicans take back the House in the 2022 November midterm elections.

During a press conference on Wednesday, Boebert spoke out against the Biden administration’s Disinformation Governance Board, and was questioned by a reporter on “misinformation from the former president” regarding the 2020 election.

Rep. Lauren Boebert (R-CO) spews disinformation about the 2020 election while speaking out against the Disinformation Governance Board:

“I hope that you’ve seen ‘2000 Mules’, I would like to investigate if any of that is provable.” pic.twitter.com/yHx3jj9VcN

“We need to have hearings,” she responded,” and that’s what I’m looking forward to in a Republican majority in the House of Representatives.”
“I hope that you’ve seen ‘2000 Mules’,” Boebert said to the reporter. “I would like to investigate if any of that is provable.”
She continued, citing an example from the film. “If we can have geo-tracking when it comes to January 6th, and come to peoples’ homes who were holding a sign outside of the Capitol and interview them–have the FBI interview them … then I certainly think we can use that same technology to look at people who may have been harvesting ballots illegally and possibly, potentially even paid to do so by non-profit organizations.”