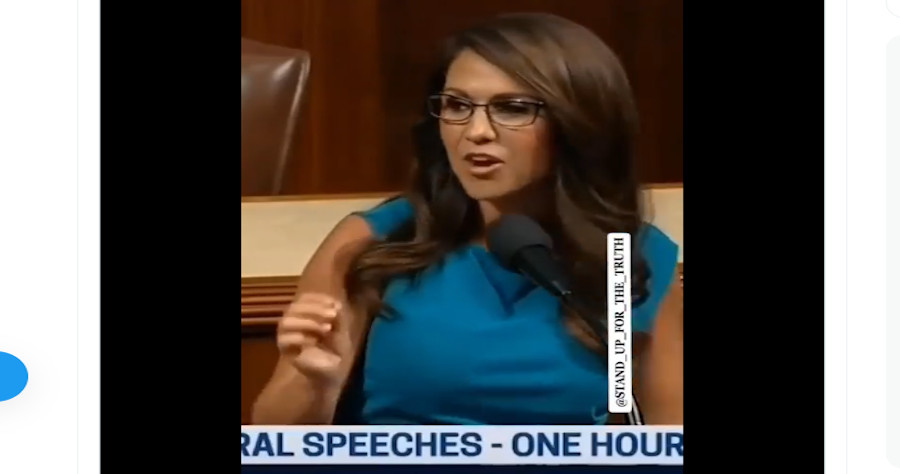 Representative Lauren Boebert (R-CO) took to the House floor this week and delivered one of the most powerful rebukes Americans have heard when it comes to the illegal, unconstitutional, and immoral efforts on the part of Democrats to remove individuals’ ability to defend themselves.

The speech, perhaps her best ever, raises every critical hypocrisy about this fake effort to keep America safe. In reality, the gun grab is just a totalitarian ploy to make sure the population is docile and defenseless.

Watch as Boebert perfectly captures the words, tone, mood, and energy in these critical times:

“I want to begin this evening by thanking my Democrat colleagues for their outstanding work in encouraging millions of Americans to celebrate their second-amendment rights by purchasing their first, second, or even one-hundredth firearm.

When the left’s riots in cities across America to Biden’s threat to strip away our basic constitutional rights. Democrats are single handedly responsible for the sale of tens of millions of firearms. Bravo. Well done.

And, I hear that the interest has begun to peak when it comes to the sale of [AR-15s]. Now, I have some questions for these freedom haters. When are you going to call on the Chief Executive, the basement dweller, to hold his own son accountable for his gun crimes?

Hunter Biden lied on a federal firearms application, which is punishable by up to ten years and a $250,000 fine, of which ten percent will not be going to the Big Guy.

Rules for thee, but not for my crackhead, parmesan- smoking, gun criminal son.

What about the disposal of Hunter Biden’s gun in a back alley dumpster and why was the secret service involved in locating this firearm?

Can you just imagine for half a second if Donald Trump, Jr. was involved in firearms crimes and his dad ordered the secret service to cover it up? That’s just the start of the hyporisy.

Biden will call widely-purchased firearms weapons of war, but then he’ll tell you you need an F15 or nuke to keep the federal government in check.

He will target so-called merchants of death, but celebrate the 600 abotion clinics across America.

This regime will encourage riots, defund the police, and try to take away Americans’ right to self-defense.”

It’s jaw-dropping stuff. In the span of two minutes, Boebert was able to capture what tens of millions of Americans think and feel right now. We hear Democrats push for limitless abortion and then pretend to care that kids were gunned down? Each is a tragedy, but the scales are not even comparable; nineteen kids to 60 million?

And we’re supposed to take them seriously?

Then of course there is the Hunter Biden angle, which is so obviously corrupt that it cements the idea we live in a two-tiered society. There are the self-styled elites and the rest of us. Nothing better points this out than the comparison to Donald Trump, Jr. They entirely lied about Russian collusion for four years and look how big of a story THAT was. It is safe to say the same scenario, applied to Trump rather than Biden, would result in utter insanity.

The New York Post notes that Boebert has a long history of advocating for gun rights and calling out the political hacks who argue against it.

“Boebert has made a name for herself as a proponent of gun rights.

The congresswoman…called Texas Democratic gubernatorial candidate Beto O’Rourke a “jerk” for interrupting a press conference by Gov. Greg Abbott and other officials Wednesday to demand action on gun control.

“Beto acted like a total jerk and tried to use the deaths of these children as a prop to advance his political candidacy,” she said.

The Republican — who before wining her office founded a firearm-themed restaurant in Rifle, Colorado — has vowed to show up to work armed and tussled with Capitol Police early last year after setting off a metal detector set up in the wake of the Jan. 6 Capitol riot.”