Lindsey Graham: Pelosi Running for Re-election Is ‘Best News’ for Republicans, But ‘Sad for the Country’ [VIDEO] 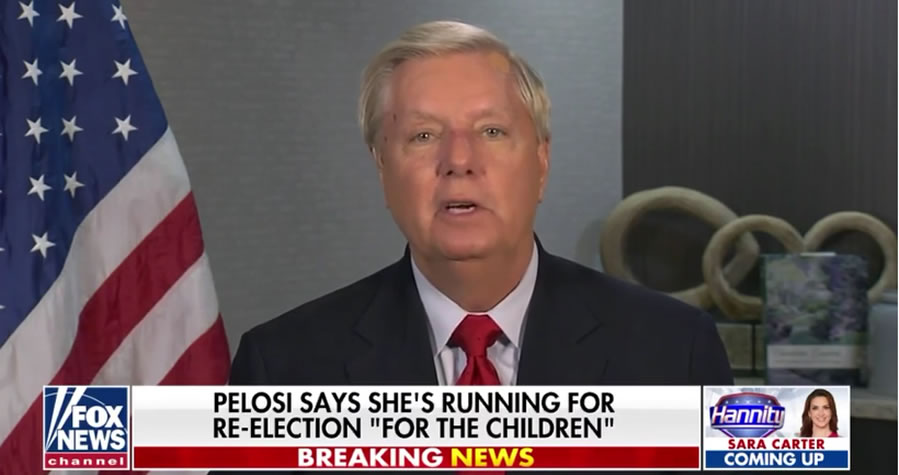 House Speaker Nancy Pelosi (D-Calif.) announced via video on Tuesday that she is running for re-election, at a time when 29 House Democrats have announced they will not seek another term in office.

Pelosi did not say if she’ll seek another stint as House Democrat leader. She’s been in Congress for 33 years and will turn 82 years old in March.

“When Nancy Pelosi said that she’s going to run again for the House of Representatives, that’s the best news I’ve heard as a Republican in a very long time. But very sad for the country. So to the American people, if she runs, make sure you fire her as speaker.”

Graham said if Pelosi didn’t run, “that would be an admission they’re going to lose the House. And if she does run, it allows Republicans to tell the American people they’re doubling down on this failed leadership. So we’re in a great spot as Republicans. We just need to stay focused and come up with a positive America-first agenda as we attack their failed policies.”

In her announcement, Pelosi said her “why” for being in Congress is the “children.”

When people ask me, what are the three most important issues facing the Congress, I always say the same thing — our children, our children our children. Their health, their education, the housing and economic security of their families, a clean safe environment in which they can thrive, and a world at peace, where they are all welcome and in which they can reach their fulfillment.

Pelosi recounted some of her legislative victories and priorities. Then she made her announcement:

“While we’ve made progress, much more needs to be done to improve people’s lives. Our democracy’s at risk because of assaults on the truth, the assault on the US Capitol, and the state by state assault on voting rights. This election is crucial. Nothing less is at stake than our democracy. But as we say, we don’t agonize we organize.

“And that is why I am running for re-election to Congress and respectfully seek your support.”