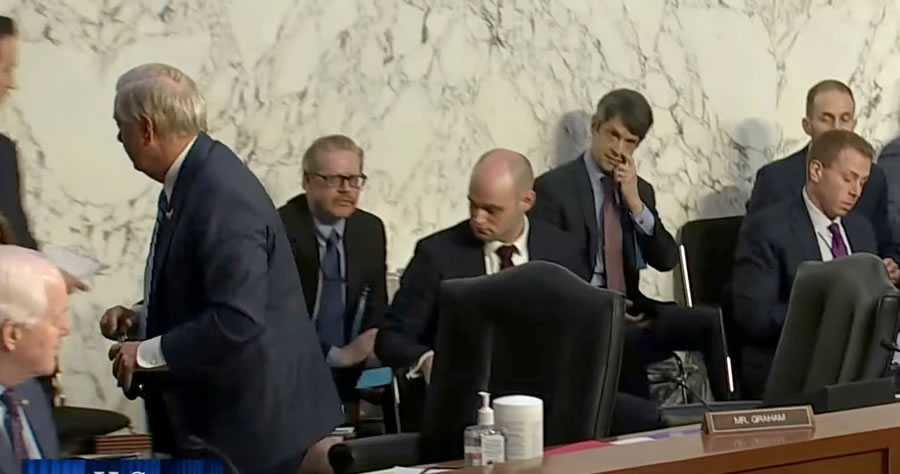 Sen. Lindsey Graham (R-SC) walked out of Tuesday’s Senate hearing for Supreme Court nominee Ketanji Brown Jackson during a clash with Senate Judiciary Committee Chairman Dick Durbin (D-Ill.) over the release of terror detainees from Guantanamo Bay, exclaiming at one point that he wouldn’t care if they died in prison without trial.

Graham (R-SC) had grilled Jackson about her time representing Gitmo detainees while she was a federal public defender in Washington, DC and pointed out that those released from the military prison in Cuba often returned to the battlefield to kill Americans — with some even ending up in high-ranking Taliban positions.

“Every group that wants to pack the court, that believes this court is a bunch of right-wing nuts who are going to destroy America, that considered the Constitution trash, all wanted you picked,” Graham told Jackson.​​

“This is all I can say: that so many of these left-wing radical groups who would destroy the law as we know it declared war on Michelle Childs and supported you is problematic for me,” he said. ​

At that point, Durbin spoke up to say that Rep. Jim Clyburn (D-SC), who had advocated for Childs to be Biden’s choice, was backing Jackson’s confirmation.

“On the issue of Guantanamo, there are currently 39 detainees remaining. The annual budget is $549 million per year,” Durbin said. “Each of these detainees is being held at the expense of $13 million per year. If they were to be incarcerated at the SuperMax federal prison in Colorado, the amount would be dramatically, dramatically less.”

Graham then interjected and asked if Durbin would be willing to support “indefinite detention under the law of war for these detainees” in the US if Gitmo were closed. As Durbin began to respond, the Republican interjected, “The answer is no.”

​”The system has failed miserably, and advocates to change the system — like she was advocating — would destroy our ability to protect this country,” Graham said, indicating Jackson.

“We’re at war, we’re not fighting a crime,” the Republican added. “This is not some passage of time event. As long as they’re dangerous, I hope they all die in jail. If they’re ​going back and kill Americans, it won’t bother me one bit if 39 of them die in prison​. That’s a better outcome than letting them go. If it costs $500 million to keep ’em in jail, keep ’em in jail, because they’re going to go back to the fight.

“Look at the friggin’ Afghan government!” Graham exclaimed. “It’s made up of former detainees at Gitmo! This whole thing by the left about this war ain’t working!​”

As Durbin resumed the hearing, Graham got up and walked out of the room, taking a bottle of soda with him.