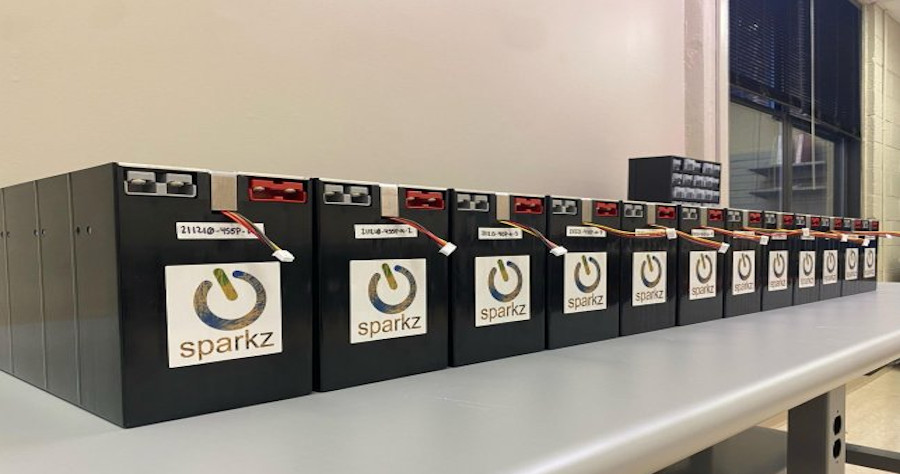 In an effort to bring down costs, General Motors, Tesla, Nissan and other automakers have pledged to start building cars with cobalt-free lithium ion batteries.

Meanwhile, a pair of energy startups, Sparkz and Texpower, are preparing to scale up production of their high-performance, cobalt-free batteries.

But with the price of nickel rapidly rising, the need for additional battery chemistry breakthroughs remains.

Since they first moved from research labs to market in the 1980s, lithium ion batteries have relied on cobalt cathodes. Cobalt offers tremendous energy density, but the metal is expensive.

In recent years, cobalt has accounted for roughly a quarter of the cost to make a lithium ion battery, more than the cost of all the other metals in a battery combined.

As part of a broader push to shrink the carbon footprint of the U.S. economy, the Biden Administration wants electric cars to account for 50% of the auto market by 2030.
Since they first moved from research labs to market in the 1980s, lithium ion batteries have relied on cobalt cathodes. Cobalt offers tremendous energy density, but the metal is expensive.

In recent years, cobalt has accounted for roughly a quarter of the cost to make a lithium ion battery, more than the cost of all the other metals in a battery combined.

As part of a broader push to shrink the carbon footprint of the U.S. economy, the Biden Administration wants electric cars to account for 50% of the auto market by 2030.
Most of the world’s cobalt mines and processing facilities are operated by Chinese companies and located in the Democratic Republic of Congo, where mine operators have faced accusations of child labor violations and other human rights abuses.

Environmental groups have also raised concerns about the impacts of Congo’s cobalt mines on soil, air and water quality.
“The motivation for battery makers and automakers is primarily driven by cost and long-term transparency,” Venkat Srinivasan, director of the Argonne Collaborative Center for Energy Storage Science at Argonne National Laboratory, told UPI.

“But not far behind that is the environmental aspects and human rights, especially today when there is more focus on those issues,” Srinivasan said.

From the beginning, scientists and lithium ion battery makers have known that cobalt was a problem, but it has become more pressing in recent years as the trade war between China and the United States intensified and supply chains faltered.
Last month, the price of cobalt reached $79,295 per ton, its highest price since June 2018.

Over the last decade, scientists have developed a variety of technological tweaks to make up for the performance drop-off when a lithium ion battery’s cathode is robbed of its cobalt.

“The higher nickel you go, the better the energy density,” Arumugam Manthiram, an expert in energy storage and professor at the University of Texas at Austin, told UPI.

But altering the chemical composition of a battery is never easy, and even small changes can lead to changes in performance and reliability.

“Too much nickel and the cycle life will suffer,” Manthiram said. “It can lead to other concerns, too, like thermo stability.”

Sparkz, which expects to break ground on a new lithium ion battery production facility, or gigafactory, and deliver batteries to its first customers by the end of 2022, is the proud owner of six patents transferred from the Oak Ridge National Laboratory.

One of those patents is the recipe for a cobalt-free cathode material featuring a special mix of nickel, iron and aluminum.

The patented material can double the energy density achieved by lithium iron phosphate batteries, the only cobalt-free battery currently on the market.

Lithium iron phosphate has reached its performance peak, however, according to Manthiram, who helped first develop the technology a few decades ago.

“With high nickel, there is room to squeeze out a little bit more,” he said.

Nickel is geologically and geographically more widely distributed than cobalt, with healthy deposits in Canada, Greenland and even the United States. However, a small but significant amount of nickel is sourced from Siberia, and Russia has an outsized influence on the nickel market.

Russia’s invasion of Ukraine has sent nickel prices soaring. Last month, the London Metal Exchange halted the metal’s trading after its price doubled in a day.

Though most expect nickel’s price to moderate in the coming weeks and months, its volatility remains a concern.

While efforts are underway, it will take time to bring more nickel mines and processing facilities online to meet the growing demand for high-nickel electric car batteries.

“If you’re in the battery community, you worry about nickel,” Srinivasan said.

The challenge for battery researchers is that science can never move as fast as shifts in markets, prices and consumer preferences. Nevertheless, researchers are already working on the new iterations of the lithium ion battery.

Even with demand for cobalt-free batteries at a fever pitch, Sparkz won’t be selling to automakers for some time.

“The process for approval with the automakers can be three to five years,” Malhotra said. “As we continue talks with automotive manufacturers, we will begin making batteries for three key markets: agricultural and off-road vehicles, material handling and stationary energy storage.”

Often, battery makers must find bridge markets for their products as they work to meet the needs of car makers.

“At DOE, for the longest time, we’ve supported manganese-rich technologies, Srinivasan said. “For us, the thing has always been, let’s diversify, let’s not put too many eggs in one basket.”

Sparkz CEO Malhotra said his company will continue to focus on re-engineering and scaling a domestic battery supply chain, while federal scientists find the next breakthrough.

“We should allow our extensive network of experts at our national laboratories to focus on research and development and let companies like Sparkz manufacture and scale,” he said in an email.

Despite the new challenge presented by the rising nickel prices, Manthiram said going cobalt-free is the right move.