LOL: Biden Voter Gets Hilarious Gift At The Gas Station From A Stranger [VIDEO] 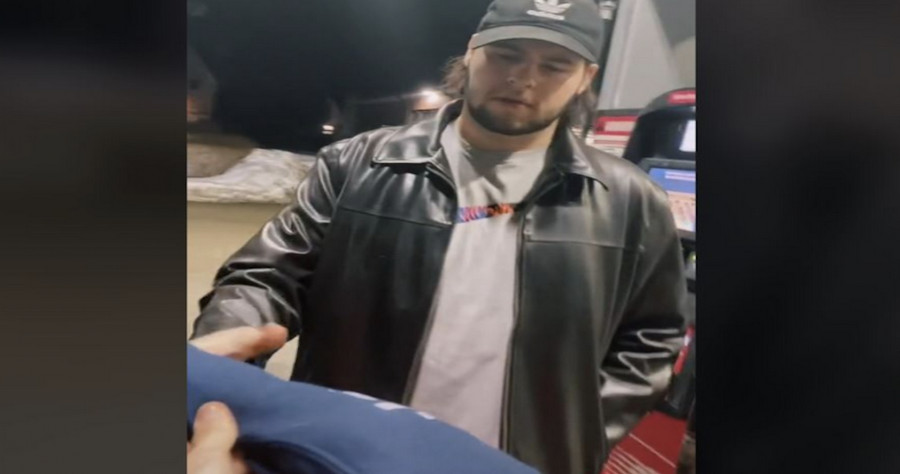 Those who voted for President Biden should have known what they were getting themselves, and thus the nation, into. Biden has always been a bit of a disaster, a gaffe-prone fool who Robert Gates described as someone who has “been wrong on nearly every major foreign policy and national security issue over the past four decades.”

Even Obama, who Biden served as VP under, said “Don’t underestimate Joe’s ability to fuck things up.”

Well, apparently what’s true of foreign policy and Joe generally is equally as true about Biden’s ability to wreck America’s energy situation, as he’s proven a disaster for those filling up their cars at the pump.

As the RNC reported in February, prices were already up more than a dollar from a year prior, when the average price for a gallon of gas was $3.498.

Now that the average is $3.656, according to AAA, prices are up almost $1.15 from a year prior. Prices are a full dollar higher today.

Well, one person decided to have some fun with that combination of Biden voters enabling Biden and Biden being a disaster at the pump, handing a hilarious sweatshirt saying “Joe Biden touched me” to a proud Biden supporter filling up his car. Watch that here.

If you’d like to check out the online store of the hilarious TikTocker behind the stunt and want to see their “offensive hoodies” you can find them here.

As Wayne Dupree’s site put it when describing a similar incident (offensive hoodies seems to do this quite a bit), the Biden supporter’s complete lack of awareness in supporting Slow Joe while at the pump, the place that’s perhaps the greatest indication of Biden’s failure, shows just how…not bright Biden’s constituents are. In that outlet’s words:

I don’t know about you, but if I was dumb enough to have voted for Bumbling Joe Biden and I had a bumper sticker on my car, I’d have the common sense to scrape that thing off and go undercover so nobody knew I had any part in this circus.

Apparently, this young guy at a gas station doesn’t have that type of common sense.

Unfortunately for the GOP’s midterm chances, but perhaps fortunately for Americans filling up their cars, other Democrats are more astute and are looking for ways to end the crisis. As Breitbart reported in February:

The increase in gas prices has the Biden administration worried the midterms could be impacted. As such, the Washington Post reported vulnerable Democrat senators are working on legislation to suspend the gas tax until after the November election.

It is unclear if President Biden supports cutting the gas tax to help Democrats win reelection, though the Post reported Biden is considering a federal gas tax holiday, “potentially pausing fees at the pump as part of a broader campaign to combat rising prices.”

Still, Psaki has shown the Administration’s reticence to boost American oil production, so perhaps there will be many more opportunities for this comedian to hand out his hilarious hoodies.