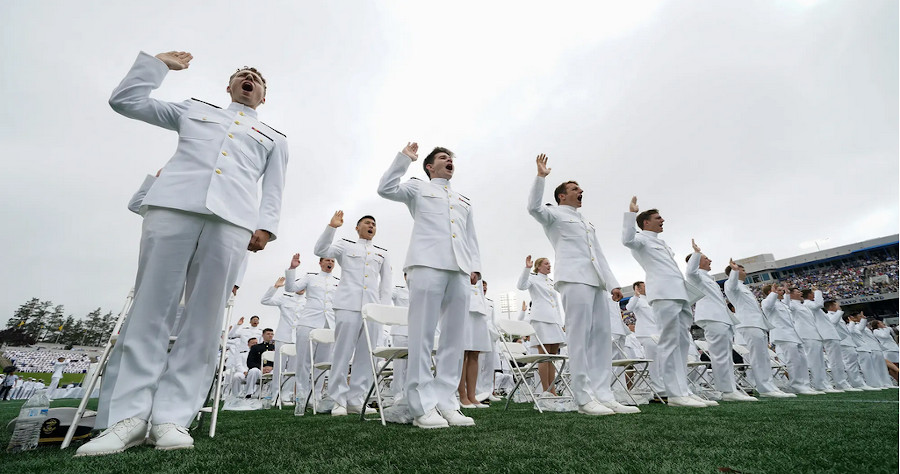 President Biden told graduating midshipmen at the Naval Academy Friday that he applied to the school in 1965 — but a quick check of his biography shows problems with the story.

Biden said he applied to Annapolis with a letter from then-Delaware Sen. J. Caleb Boggs, but the year he cited — 1965 — is the same year he graduated from the University of Delaware. The academy doesn’t offer graduate degrees.

“He was a fine man. His name is J. Caleb Boggs,” the president went on. “I didn’t come to the academy because I wanted to be a football star. And you had a guy named [Roger] Staubach and [Joe] Bellino here. So I went to Delaware.”

“But all kidding aside,” Biden continued on Friday, “the best line of the debate was after it’s all over, the announcer, the questioner — who was a good guy, but supported my opponent, who was a good man as well, I might add — and he said, ‘Sen. Boggs, is there anything else you want to say?’ And he said, ‘Yes, just one thing.’ And he took the microphone. He said, ‘You know, Joe, if you accepted my commission to the — my appointment to the academy,’ he said, ‘you’d still have one year and three months’ active duty and I’d have no problems right now.’”

It’s unclear if Biden has told the story before, but it surprised political journalists who have covered his many campaigns and his presidency. Biden’s 2008 autobiography “Promises to Keep” does not mention the Naval Academy.

Spokespeople for the White House and academy did not immediately respond to The Post’s request for additional information.

The US military was heavily involved in the Vietnam War by the mid-1960s and had Biden attended the academy, he would have had to serve in the Navy upon graduation.

Biden received five student draft deferments during his four years at the University of Delaware and subsequent three years at Syracuse University College of Law.

After Biden graduated law school in 1968, he reportedly was deemed unfit for military service by citing childhood asthma. His memoir doesn’t mention the condition while describing his football exploits or his work as a lifeguard. A report released in November by his doctor also doesn’t mention asthma.

Biden has a habit of seeking to relate to his audiences by sharing questionable anecdotes about his personal experiences — as well as making false or exaggerated claims.

In September, Biden told Jewish leaders that he remembered “spending time at” and “going to” the Tree of Life synagogue in Pittsburgh after the mass murder of 11 people in 2018. The synagogue said he never visited and the White House later said he was thinking about a 2019 phone call to the synagogue’s rabbi.

About two weeks later, Biden told an Idaho audience that his “first job offer” came from local lumber and wood products business Boise Cascade. The company said it was news to them and Biden had not previously described an interest in moving to the state.

In January, Biden told students of historically black colleges in Atlanta that he was arrested during civil rights protests — for which there also is no evidence.

In perhaps the most infamous example, Biden in 2020 claimed he “had the great honor of being arrested” in South Africa when he was “trying to get to see [Nelson Mandela] on Robbens [sic] Island,” where Mandela was in prison until 1990. He said Mandela thanked him for it. Later, Biden admitted that it was untrue.

Biden dropped out of his first presidential campaign in 1988 due to a scandal involving plagiarism of speeches and a law school paper and controversy about claims he made about his academic record.

The president’s critics often accuse the 79-year-old of being in mental decline. During his remarks Friday, the president said “North Korea” when he meant to say “South Korea” as he listed supporters of US sanctions against Russia for its invasion of Ukraine.