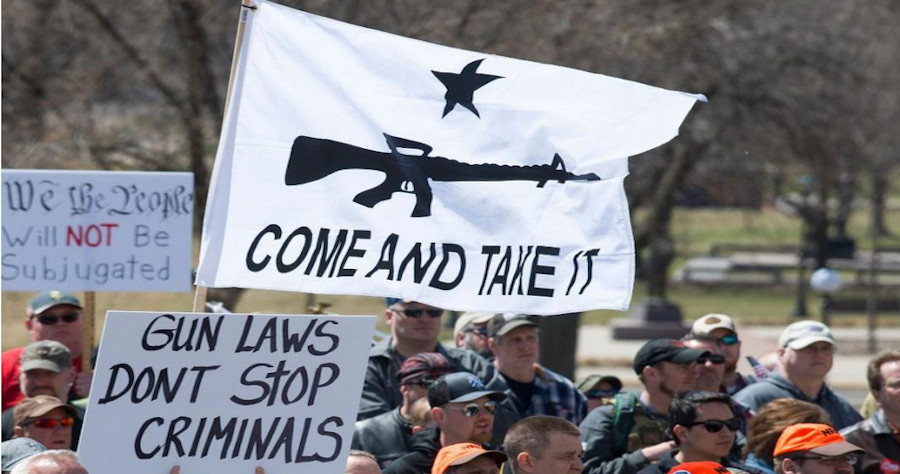 Unconstitutional gun confiscation orders: the red flag of tyranny at its worst.

Anti-liberty leftists have always been gaslighting about their obvious goal of confiscating guns, unconstitutional gun confiscation aka ‘red flag’ orders proves they’ve been lying all along.

All too often, our leaders are quick to take advantage of a ‘serious crisis’ to empower themselves instead of actually solving the problem that caused it. In the case of the recent mass murder tragedies, the anti-liberty left didn’t waste any time in blaming innocent gun owners. Since you’re guilty, you’re going to have to pay a penance for your guilt.

Despite the hype and the distractions, they clearly want unconstitutional gun confiscation orders and unconstitutional (are you sensing a theme here?) control over private property with ‘Universal’ or ‘Expanded’ background checks.

You’ll notice that the anti-liberty left carefully avoids certain words simply because they would convey what is really taking place.  They cannot use words such as confiscation and unconstitutional even though these honestly convey the issues at hand. Instead, they have come up with a whole series of phrases to hide the true nature of what they are demanding. Euphemistically vague phrases like ‘red flag’ or ‘yellow flag’ orders. Their ‘ fallback’ position to what they really wanted all along. What they call ‘smaller measures’ because Congress is unlikely to pass significant gun control legislation. We don’t know about you, but legislation that completely inverts our system of justice eviscerates whole parts of the Bill of Rights, and makes a mockery of the concept of due process would seem to be ‘significant’.

“The beginning of wisdom is to call things by their proper name.” ? Confucius

Anti-liberty leftists put their best wordsmiths on conjuring up soft language for wholesale gun confiscation. Starting with labeling them as so-called ‘red flag’ orders. A term that is meaningless but implies danger.

The implied imagery is a vague warning that something is wrong and that is all that they needed. Back in colonial times, a woman would be scarred by being labeled with a scarlet (or red) letter. Their intent was to do the same from the start with whoever was tainted by the ‘red flag’. Now that the people have become wise to this crass word manipulation, they’ve rolled out a new version: ‘Yellow flag’ orders. All the unconstitutional gun confiscation as before, but with a slightly brand new name.

As Tucker Carlson eloquently stated the other night:

Yesterday, they unveiled their plan to seize firearms from American citizens who have not been convicted of a crime or even accused. Now, under normal circumstances, it would be instantly obvious that that is unconstitutional. In our system, you have to be convicted before you can be punished, but in the hysteria that understandably follows a tragedy this horrible, politicians know that they can suspend civil liberties.

These unconstitutional abominations are also known as Extreme Risk Firearm Protection Orders (ERFPO), Risk Protection Orders (RPO), Extreme Risk Protection Orders (ERPO), and Gun Violence Restraining Orders (GVRO). Liberticidal leftists have also been wearing out their thesaurus conjuring up harmless descriptions of how these things work. Instead of talking about how an innocent person’s means of self-defense and personal property is to be taken at gunpoint. They talk about how these ‘temporarily’ separate people from their guns or keep guns out of the hands of individuals perceived as a danger to themselves and others.

Make no mistake, these go far beyond the mellow language that barely describes what actually happens. In most cases, unconstitutional gun confiscation orders will be ironically executed by heavily armed law enforcement personnel in an early morning raid. With you or your canine companions odd’s of survival depending on the severity of the raid.

What’s even worse is that you don’t really need to own any firearms to be awoken at 4:00 am to your front door being smashed in by a SWAT team on a gun hunt. In most cases, an accuser only needs to assert you are somehow ‘dangerous’ and you might own guns. Or they just don’t like you and want to take revenge. The end result is that you better have something for the SWAT team to find, or they will tear your house apart to find it.

What is truly incredible in the discussion of ‘red or yellow’ flag unconstitutional gun confiscation orders is that the anti-liberty left still persists in trying to gaslight the public that ‘no one is coming for your guns’ or no one is talking about gun confiscation. As in this from Morning Joe: “It’s ‘Paranoid’ To Say Gov. Coming For Guns, But Praises Beto Who Said Just That!”  Given that these are the ‘smaller measures’ being pushed by the liberty grabber left.

ERFPOs, RPOs, ERPOs, GVROs, or whatever acronyms they want to use, are straight-up designed to deceive. At their core, they mean the destruction of due process, the rule of law, and gun confiscation. For starters, they violate the 1st,2nd,4th, 5th, and 6th Amendments, how’s that for unconstitutional?