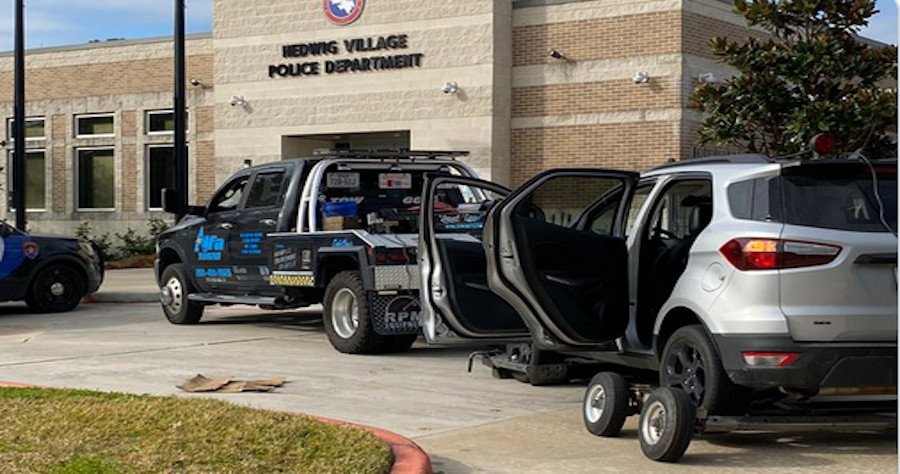 Police in Texas have arrested a man after he allegedly attempted to rob a man at gunpoint on I-10.

During the process, the man allegedly accidentally shot himself in the head, he is expected to recover.

Police in Hedwig Village began getting multiple calls regarding a traffic crash near the 8800 block of the Katy Freeway, which ended in shots being fired.

When they arrived on the scene, they saw several people who were wrestling someone who they later learned had been shooting at the victim.

Hedwig Village PD investigating a road rage incident. As soon as we learn more we will let you know. #abc13 pic.twitter.com/6Dlof6S2oF

Adam Bennet from KHOU 11 News received an anonymous video of the shooting and he spoke to an unidentified witness.

That person alleges the suspect, identified as 29-year-old Carlos Marquez, apparently was having an issue with road rage as he was brake checking other drivers on the busy interstate.

The witness alleges seeing Marquez block the driver in with his vehicle, get out, and start screaming at him. The alleged witness told Bennett:

“It was crazy. No one could believe it. I mean, who gets out on the middle of I-10 during rush hour? Cars were zooming by him literally and he’s just yelling at some guy.”

The alleged witness told Bennet that he left the area but returned later, and when he did, he saw Marquez yet again brake check someone in the same area. Marquez allegedly blocked the victim’s vehicle as he did in the first instance.

The witness alleges that Marquez got out of his vehicle, but this time he had a gun in his hand. Marquez allegedly walked up to the other driver who exited his car and the two began to argue in the middle of the interstate.

According to police, at some point, while the two were arguing, Marquez allegedly decided he was going to rob the man. During the robbery attempt, Marquez allegedly fired two rounds at the victim. It is unknown if any of the rounds struck the man.

After the two rounds were allegedly fired by Marquez, the victim decided to jump him in an attempt to prevent Marquez from killing him. It was during the physical encounter that Marquez fired an additional shot, but this time, he struck himself in the head.

Hedwig Village Police took custody of Marquez and had him transported by medical crews to the Ben Taub Emergency room for treatment. Surprisingly, Marquez is expected to fully recover…after he gets out of jail.