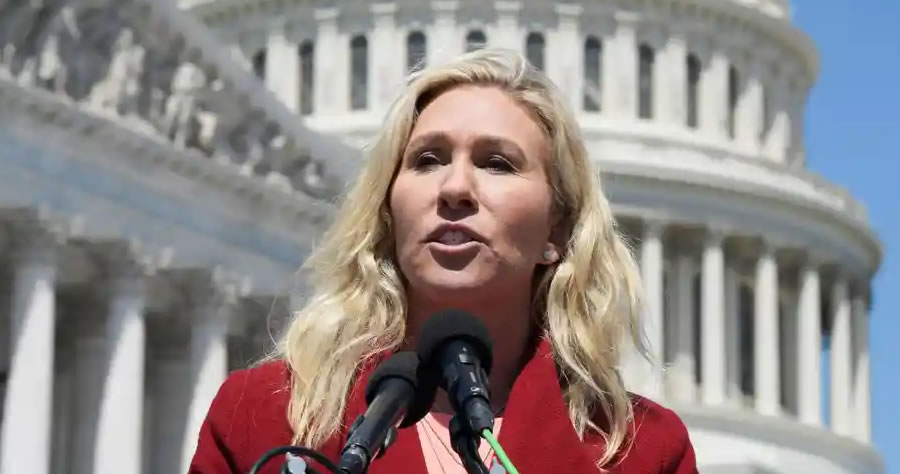 Georgia Congresswoman Marjorie Taylor Greene said Tuesday night she has decided to seek a retraining order against a House Democrat staffer who was captured by Capitol Police on security cameras defacing posters outside her Washington office.

Greene told Just the News that she felt like she had no choice but to seek the protective order against Timothy Hysom, the chief of staff to Massachusetts Democrat Rep. Jake Auchincloss, after the U.S. attorney’s office in Washington declined a police request to issue an arrest warrant and charge the staffer.

“Nancy Pelosi and Democrat leadership don’t believe in protecting me. So I have no other choice but to do whatever I can do to protect myself and protect my staff,” she said during an interview on the Just the News, Not Noise television show.

Matt Corridoni, a spokesman for Auchincloss, said Tuesday night he believed the order was unnecessary because Hysom has no intention of interacting with the congresswoman.

“Tim has never had direct contact with the congresswoman, nor does he plan to in the future. The order is unnecessary and nothing more than political theater,” he said.

On Monday, Corridoni confirmed that Hysom had affixed stickers to posters outside Greene’s office that declared there are just two genders, male and female, because he felt the poster’s messages were “bullying.” The spokesman said he did not believe Hysom’s actions violated any laws and that the request to prosecutors to file charges in an arrest warrant was “ridiculous.”

Greene said her concerns have been exacerbated by the fact that she has received a total of 60 death threats in 2022 but has been turned down by House leadership for a security detail.

She said she was spooked when Capitol Police and prosecutors briefed her on what they observed about Hysom when he placed stickers, mostly custom-made religious statements quoting the Bible and criticizing Greene’s position on gender, and said she is concerned that Hysom remains allowed to work in the same Longworth Office Building where she and Auchincloss have offices.

“I didn’t even know who this person was that was continuing to attack me for months and months,” she said. “And all I know is he refuses to apologize, He’s doubled down on what he has done.”

The official police request for an arrest warrant said officers captured Hysom on video surveillance twice defacing the posters in mid-March but believed he was responsible for a total of seven instances going back to January. Capitol Police asked prosecutors for permission to arrest the Democratic staffer on a District of Columbia charge prohibiting the defacing of public or private property and prosecutors declined.