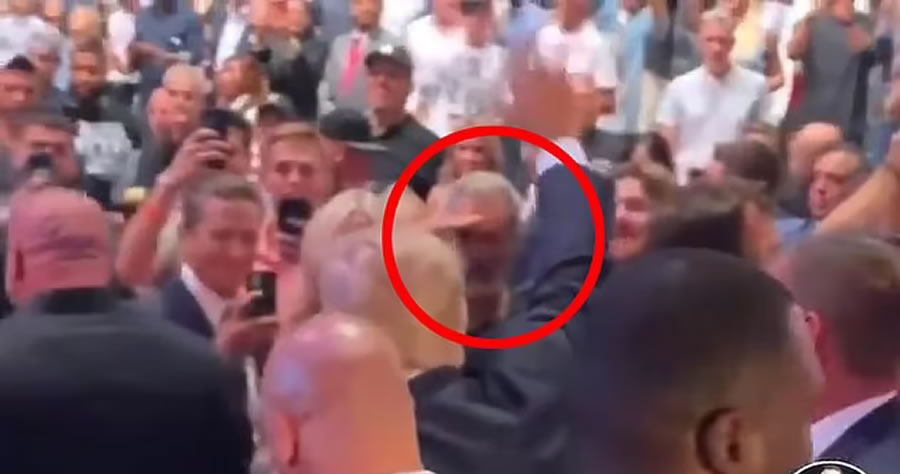 This is the moment Mel Gibson saluted Donald Trump in the crowds at Saturday’s UFC clash between Dustin Poirier and Conor McGregor .

The Hollywood actor and director, 65, held his hand to his forehead as the former US president walked by surrounded by his bodyguards at UFC 264 in Las Vegas.

The video has sparked a huge response online with some describing Gibson as a ‘true patriot’.

But the gesture sparked meltdown among ‘woke liberals’ who said they were ‘not surprised’ the actor, known for starring roles in Lethal Weapon and Braveheart, appeared to be supporting the Republican.

Trump was met with a mix of applause and some boos as he entered the T-Mobile Arena and chants of ‘USA’ rang out around the arena.

Gibson, who doesn’t speak publicly about his political views, appeared to be a few feet away from Trump when he gave the salute.

Fans of the actor called him a patriot, with one Twitter user saying: ‘A true Patriot! Not afraid like the other Hollwood spineless!’ while another added: ‘Mel Gibson, always the Patriot’.

A third said: ‘Mel Gibson is a Patriot who literally played The Patriot. Wokesters hate him because the only thing they salute is their tall latte they stapled a dress on and put their d*** in.’