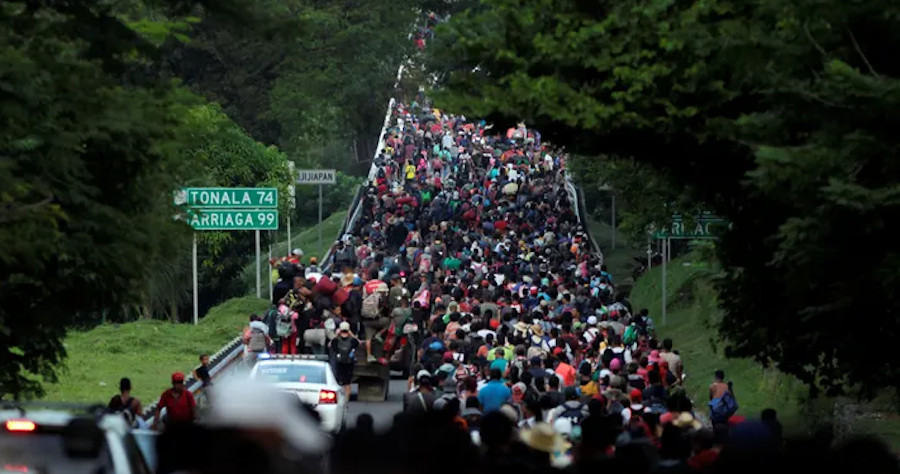 A Haitian migrant taking part in what could be the largest ever migrant caravan through Mexico to the U.S. is demanding that President Biden keep his promise to allow them to stay once they reach the border.

“He promised the Haitian community he will help them,” the migrants, who were interviewed by Fox News Friday, said. “He will recall Title 42. He will help us have real asylum.”

The migrant is taking part in a caravan that could become the largest ever to reach the U.S. southern border, with the current number of close to 10,000 migrants, is expected to swell to about 15,000 before it reaches the border.

The caravan departed Tapachula on the Mexico-Guatemala border on Monday. The migrants, which mostly come from Venezuela, Cuba and Nicaragua, will travel what is known as the coastal route to reach the U.S. border.

“We consider we are around 9,500, it measures 51/2 km from the start to the end, people keep on joining, in the first police check there were approx 100-150 national guard, INM, state police and let us through freely,” the caravan’s organizer, Luis Villagran told Fox News Monday.

The migrant’s comments come as the Biden administration continues its fight to end Title 42, a Trump-era rule that allows the U.S. to expel asylum seekers without the typical legal process. The policy was enacted early in the COVID-19 pandemic as a way to help prevent the virus from spreading, with the Centers for Disease Control and Prevention announcing earlier this year that it planned to lift the order.

But a lawsuit filed by 24 states at least temporarily put plans to end the rule to a halt, with a Louisiana U.S. District Judge ruling that the restrictions can stay in place until the lawsuit is resolved. The states have argued that lifting the rule would lead to a “wave of illegal migration and drug trafficking.”

Critics have blamed the president for creating what has become a crisis at the southern border, arguing Biden’s reversal of Trump-era immigration policies has created an incentive for migrants to make the dangerous journey through Mexico to the U.S. border.

The crisis has become politically challenging for the White House, seemingly leading to Biden’s change of tune when it comes to migrants seeking refuge in the U.S.

“Don’t leave your town or city or community,” Biden said in an interview with ABC last year. “We’re gonna make sure we have facilities in those cities and towns run by department of — by DHS and also access with HHS, the Health and Human Services, to say you can apply for asylum from where you are right now.”

But the administration’s fight to end Title 42 has seemingly sent a different message to migrants amassing for the caravan, who are calling on Biden to allow them into the country.”

“Now we need him to keep his promise.” the Haitain migrant said.