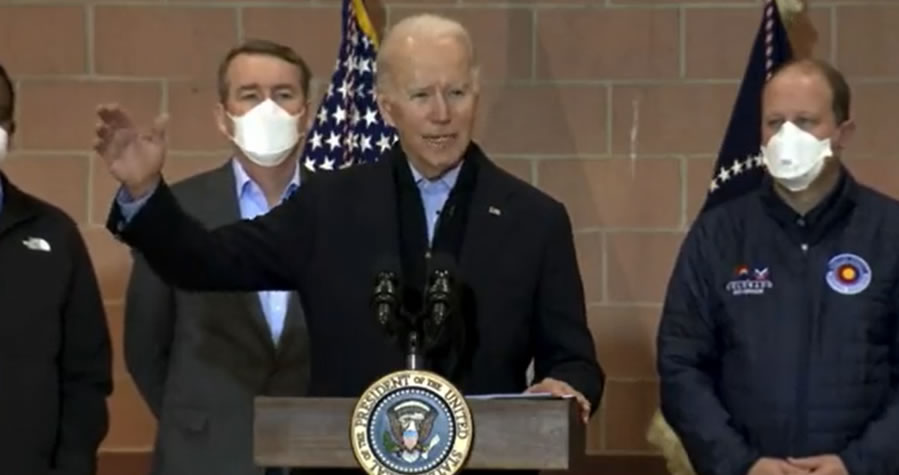 Meanwhile, while meeting with families who lost everything from wildfires in Colorado, President Joe Biden pivoted to climate change and promised “windmills” (he means wind turbines) with 100-yard “propellers” (he means blades) and that will somehow magically fix the fire danger that has always existed in western states:

Biden after touring wildfire damage in Colorado that destroyed more than 1,000 homes: “We’re gonna have windmills, you’re gonna see that have 100-yard wingspans, each, each propeller on that on that windmill, 100 yards long. So there’s so much that’s going to be able to be done.” pic.twitter.com/NmtNkoSIti

Here are the full remarks:

You’ve got — by the way, if you’re ever able to see it, we’re going to have windmills, you can — that you’re going to see that have 100-yard wingspans each — each propeller on that — on that windmill, 100 yards long.  So, there’s so much that is going to be able to be done.

And, you know, I — when I visited the National reviewable [sic] Lab- — Renewable Lab — Energy Lab — about 20 miles — I said — from here — it’s — it’s also good to create a significant number of jobs.

The reason I’m telling you this is that’s no solace that you lost your home now, but it’s that we’re going to be able to do a lot of renewable things that allow you to not only rebuild, but afford to rebuild and rebuild better — to build back better than it was before.  And it includes billions of dollars for wildfire preparedness, resilience, and response to protect homes and public resources.

'Sure, you lost your home and everything it, but just wait till you see the wingspan on our new windmills.'
His utter lack of compassion and empathy would be noteworthy if it weren't so comically incoherent. https://t.co/JinbPW7WIy

I'm the guy on the right 20-seconds into the clip…scratching my head and wonder what the hell is happening? Windmills? https://t.co/8RseTHMe5j

You might not want to put up a bunch of those "windmills" in a place prone to massive wildfires. #JustSaying https://t.co/knawuoqtTu